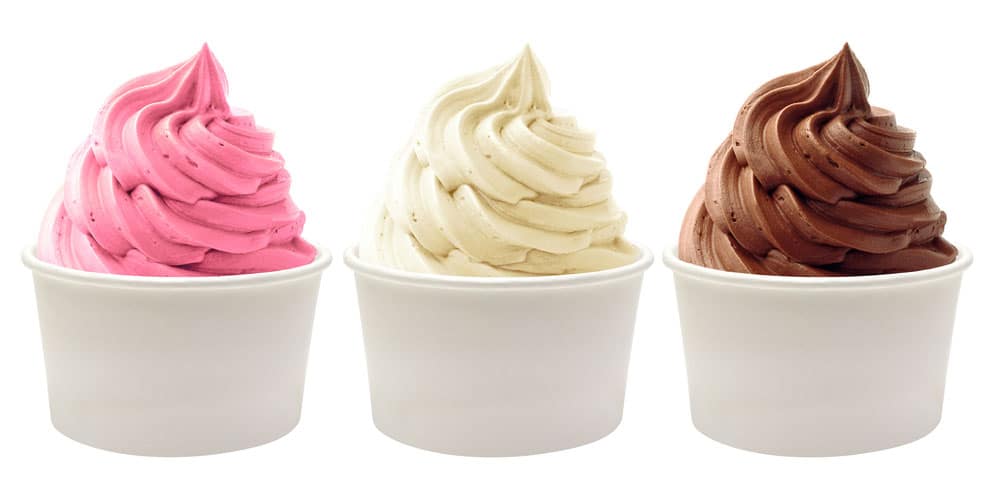 Ice cream is one of the most popular desserts people enjoy in the summer but also year-round. Who can resist its creaminess and that it comes in so many flavors from dark chocolate to butter pecan?  But what if you could get all the deliciousness of ice cream without the guilt? That’s what frozen yogurt is about — creating a healthier spin on ice cream. Because of its probiotics, yogurt has somewhat of a health halo. But is frozen yogurt healthier than ice cream? Let’s look at some of these tasty treats side-by-side and find out.

What Is Frozen Yogurt?

You’re already familiar with ice cream but you may know less about its frosty cousin. Frozen yogurt, also known as “froyo,” is a yogurt-based dessert manufacturers make by freezing a mixture of milk, sugar, and cultured bacteria (usually Lactobacillus bulgaricus or Streptococcus thermophilus). You might think frozen yogurt is the new kid on the block, but records show people consumed yogurt as far back as the eleventh century in parts of the Middle East.

The processing of yogurt kills harmful microbes in the dairy product but allows some probiotics to remain. The result is a tangy dessert that resembles ice cream. People often top frozen yogurt with various taste enhancements from crunchy to sweet, including nuts, seeds, berries, or a dollop of whipped cream or chocolate syrup. You can buy frozen yogurt at various frozen yogurt shops and in tubs at the supermarket – and you have a variety of flavors to choose from, although not as many as ice cream.

How about frozen yogurt? Some frozen yogurt brands contain less sugar than traditional ice cream, although this is variable. Since yogurt has a tangier flavor, manufacturers sometimes add more sugar to tone down the tanginess and give it the sweet taste people enjoy when they crave a dessert.

Frozen yogurt and ice cream have roughly equal quantities of protein, although Greek yogurt contains more protein than regular yogurt. Protein is a positive since it increases fullness so you feel more satisfied. Frozen yogurt also has less fat than full-fat ice cream, which makes some people feel less guilty about eating it. However, moderate quantities of fat isn’t a bad thing since fat adds texture and reduces the need for added sugar.

The sodium content of frozen yogurt varies by brand and flavor; some contain far more salt than others (flavored varieties tend to have more).  What about calcium? Both ice cream and yogurt are respectable sources of calcium, with both containing similar quantities of this bone-building mineral. One reason people eat yogurt is to benefit from the calcium it contains.

One reason people eat regular yogurt is its probiotic content. Probiotics are gut-friendly bacteria that help nurture a healthy gut ecosystem. Some studies have even shown that regularly consuming probiotics support immune health since 70% of your immune system resides in your gut. But does frozen yogurt reliably contain probiotics?

Manufacturers add active bacterial cultures to yogurt when they make it. However, it’s unclear what quantity of probiotic bacteria survives the manufacturing process. Frozen yogurt may contain some probiotic bacteria in varying amounts, but it’s not a reliable source of these gut-friendly organisms. It’s uncertain how well the bacteria survive freezing. However, frozen yogurt contains more probiotics than ice cream.

How to Choose Healthier Frozen Yogurt

Frozen yogurt can be healthier than ice cream if you choose carefully. Some frozen yogurt brands use loads of sugar (or artificial sweeteners) to make their products taste good. Choose brands with lower sugar content. You may find lower sugar versions slightly less flavorful or creamy at first, but your taste buds will adapt over time to less sweetness.

Everyone enjoys something cold and a little sweet once in a while. Although it would be a stretch to call frozen yogurt health food, it may be better for you than an ice cream cone from your local ice cream store. As with all sweet things, enjoy them in moderation.

Does Your Favorite Yogurt Have Enough Probiotic Bacteria?

Is Yogurt a Weight-Loss Food?