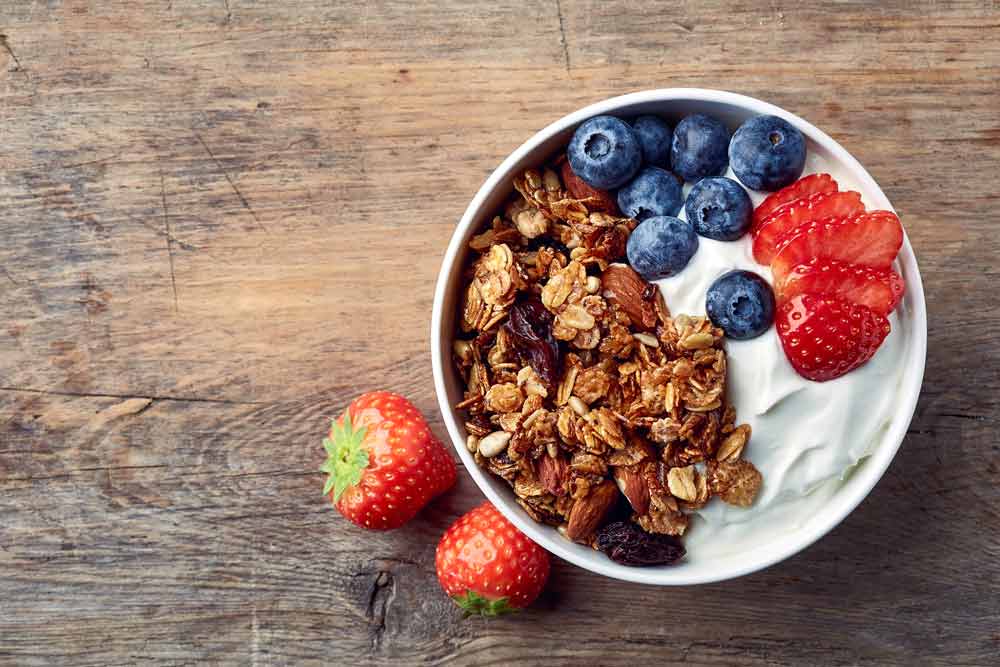 Yogurt has become a popular breakfast food and tasty snack, especially as interest in probiotics continues to grow. In case you’re not aware, probiotics are “friendly” bacteria, in contrast to pathogenic bacteria that cause illness. Your gut is teaming with probiotic bacteria, up to 100 trillion of them, and they help keep your gut peaceful and balanced. They do this by reigning in pathogenic bacteria so they don’t gain a foothold and by the positive impact they have on the immune system, 70% of which lies in your gut.

Preliminary studies suggest that these gut-friendly bacteria influence health and disease in ways we don’t yet fully understand. For example, these tiny intestinal citizens seem to help keep inflammation in check, an important job since most chronic health problems are partially fueled by inflammation. Plus, these bugs help to maintain gut health as well. With such an impressive resume, these are bacteria we want more of!

So, how do we get more of these bacteria – food or supplements? The probiotic supplement industry is thriving. According to Natural Products Inside, the global market for probiotics is valued at 36.7 billion and shows no signs of slowing. But, we don’t have to depend on a probiotic supplement to supply our guts with friendly bacteria. Fermented foods are a natural source of these organisms. The most popular fermented foods in the American market are dairy foods, particularly yogurt. More recently, another probiotic-rich dairy alternative, kefir, has gained favor.

Chances are you’ve eaten yogurt many times in your life. This creamy snack comes in a dizzying array of flavors these days, although some are quite high in sugar. Recently, Greek yogurt has taken center stage due to its thicker texture and higher protein content. However, Greek yogurt is lower in calcium. In fact, regular yogurt has twice the calcium that Green yogurt has.

Active Cultures or Not?

Theoretically, all yogurt SHOULD have probiotics as its made by adding bacterial colonies to milk to ferment the lactose and form lactic acid. The milk is pasteurized BEFORE adding the bacterial colonies, as the heat of pasteurization would destroy them. Once formed, the lactic acid thickens the milk and gives yogurt its thick, creamy consistency.  Lactic acid also gives the yogurt its characteristic tangy taste. Yogurt is arguably one of the oldest fermented foods in existence.

So, why wouldn’t all yogurt contain active probiotic cultures? If yogurt is heat processed after fermentation, it destroys some the healthy bacteria, along with the health benefits. Some manufacturers add probiotic organisms into yogurt after its heat treated to make up for the loss. Some even add some extra probiotic bacteria to compensate for the loss of viable bacteria due to storage.

Still, if yogurt is heat processed after fermentation, the yogurt may still have few active cultures – and how would you know? The National Yogurt Association helps to solve this problem by designing a seal called the Live and Active Cultures seal. Manufacturers can place this seal on yogurt if the yogurt contains at least 100 million cultures at the time it was manufactured. Frozen yogurt must contain at least 10 million cultures to bear the seal.

Seeing this seal on a yogurt container gives you some reassurance that you’re getting active cultures, as long as you don’t leave it sitting in the refrigerator for weeks. Since manufacturers can choose whether to use this seal, there may be yogurt brands that do have enough viable cultures but choose not to use the seal. But, if you’re consuming yogurt for its probiotic benefits, the seal gives you some assurance that you’re getting active cultures.

If you’re lactose intolerant or eat a vegan diet, you can still get gut-friendly bacteria by eating non-dairy yogurt. Manufacturers make non-dairy yogurt in much the same way as dairy yogurt only non-dairy milk is the medium. They commonly use Lactobacillus bulgaricus as a starter culture to ferment the non-dairy milk. If the final product isn’t treated with heat again after fermentation, it should have viable cultures.

Be picky when you choose a yogurt, dairy or non-dairy. Look for one with as little added sugar as possible. Unflavored is usually the best option as the flavorings are often a source of added sugar. You can always flavor it yourself with fresh fruit, herbs, spices, and add other healthy additions like nuts, pumpkin seeds, sunflower seeds, ground flaxseed, and even matcha powder for green tea yogurt.

Other options are kefir, kombucha, tempeh, and miso, all of which may have active cultures. However, heating these foods, as is characteristic with tempeh and miso, destroys some of the active organisms.

All yogurt contains active cultures, although some commercial brands may heat process their yogurt and destroy some of the organisms. Look for the Live and Active Culture seals on yogurt for reassurance. But, look beyond yogurt as well and get your probiotics from other sources, including nutrient-dense fermented vegetables. These foods have other health benefits as well.

Does Your Favorite Yogurt Have Enough Probiotic Bacteria?