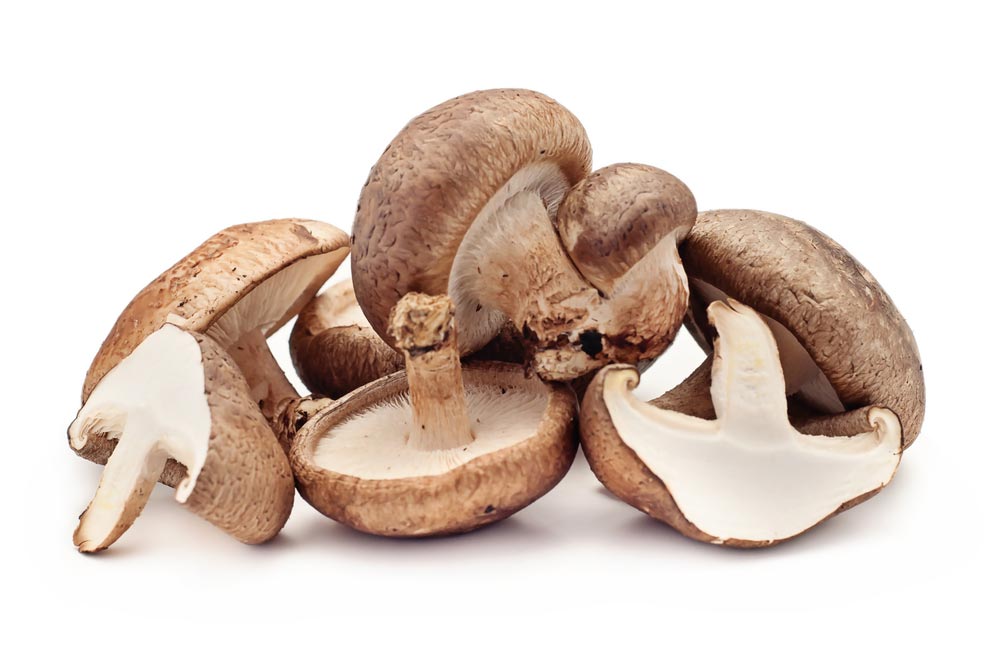 As the last roses of summer fade and the temperatures cool, the risk of catching a cold or flu virus rises. Unfortunately, there’s no sure-fire way to avoid catching a nasty, upper respiratory infection, but lifestyle habits can lower your risk. A healthy immune system is what helps fight off pesky viruses and eating a nutrient-dense diet gives your immune system the vitamin and mineral co-factors it needs to work optimally.

We need an efficient immune system to protect us against viruses, bacteria, parasites, and to protect against cancer as well. Scientists study foods to see if they have possible immune-enhancing qualities independent of their vitamin and mineral content. One that shows promise is mushrooms. In fact, a particular type of mushroom stands out for its potential immune-enhancing properties.

Have You Ever Had a Shiitake Mushroom?

You’re probably most familiar with white button mushrooms, an inexpensive variety of mushroom that’s available in most supermarkets. In fact, white mushrooms are the most common cultivated type of mushroom. But, these aren’t the only mushrooms you can feast on, although some aren’t readily available at the supermarket. Thousands of varieties of mushrooms exist, although only about 20 are commonly used for culinary purposes. One of these is shiitake mushrooms.

Shiitake mushrooms are cultivated mainly for culinary purposes, but research shows they potentially have health benefits as well. For one, shiitake mushrooms, like other mushrooms, are nutrient dense and low in calories. This mushroom with the exotic-sounding name is a good source of B-vitamins and a top source of selenium, a trace mineral with antioxidant activity. Selenium helps protect cells against the damage they face from constant exposure to oxygen inside cells and toxins. In fact, selenium plays a key role in the body’s antioxidant defense system. It’s a component of two key enzymes that defend against oxidative damage. You also need selenium for healthy thyroid function. Plus, shiitake mushrooms contain a variety of other bioactive plant compounds, including compounds with antioxidant activity.

According to research carried out at UF Food Science at the University of Florida, the humble shiitake mushroom might give your immune system a leg up. For the study, researchers gave 52 healthy men and women between the ages of 21 and 41, a stash of dried shiitake mushrooms. They asked the participants to eat 4 ounces of the mushrooms daily for 4 weeks. Before and during the study, they monitored the activity of immune cells called T-cells. What they found was that participants eating the mushrooms daily experienced improvements in the activity of gamma delta T-cells, a type of immune cell that helps protect against viruses.

The participants also showed a reduction in proteins that fuel inflammation. Based on this small study, shiitake mushrooms may enhance immune function at both ends of the spectrum, by boosting the activity of t-cells that help fight off infection and by keeping inflammation in check.

Of course, this is only one study, so more research is needed. However, scientists believe the polysaccharides, a type of carbohydrate, in mushrooms may explain some of these findings. In fact, a study in mice found that polysaccharides in mushrooms helped reduce the age-related loss of immune function. What’s more, you may not have to eat a lot of shiitake mushrooms to get the benefits. Four ounces of mushrooms daily is manageable!

Another interesting fact about mushrooms: Depending upon how they are grown, these fungi may contain substantial quantities of vitamin D. Mushrooms grown in a setting where they’re exposed to ultraviolet light, synthesize a form of vitamin D called ergocalciferol or vitamin D2. The form you find in fatty fish, eggs, and butter is vitamin D3, whereas foods that are fortified with vitamin D typically contain the vitamin D2 form.

Some, but not all, studies show that the vitamin D3 form raises vitamin D levels more than vitamin D2. However, studies in mice show a combination of shiitake mushrooms and calcium boosted bone density in mice. So, vitamin D2 has at least some vitamin D activity. We know that vitamin D plays a role in immune health as well. So, shiitake mushrooms grown in ultraviolet light may also help ward off colds and viruses by enhancing immune system activity.

Nutrient Dense and Low in Calories

Shiitake mushrooms and mushrooms in general pack a lot of micronutrients into each calorie. A full cup of cooked shiitake mushrooms has only 80 calories and offers substantial quantities of B-vitamins, calcium, zinc, and selenium. Like portobello mushrooms, shiitake mushrooms have a smoky flavor and meaty texture that makes them a good substitute for meat in some dishes. One shortcoming, though, is they’re not as high in protein. One cup has only 2.5 grams of protein. A delicious way to enjoy them is to brush them with olive oil and grill them for around 7 minutes. You can also saute these mushrooms in olive oil or butter or add them to stir-fries.

Where can you find these delightful mushrooms to add to your diet?  Many natural food markets sell fresh shiitake mushrooms, but you can also buy them dried in packages. When you rehydrate the dried shroom with water, they expand into mushrooms you can use in your recipes. As a guide, 3 ounces of dried shiitakes yields around 1 pound of rehydrated mushrooms.

More research is needed to confirm the immune benefits of eating shiitake mushrooms, but you can’t go wrong adding mushrooms of all types to your diet. They’re nutrient dense relative to the number of calories they contain, and they add plant-based versatility to meals. So, add mushrooms to the table this winter for potential viral protection – but don’t forget to wash your hands this winter either!

Twelve Amazing Foods That Will Improve Your Resistance to Disease

Vitamin D Is Important: Are You Getting the Right Kind?