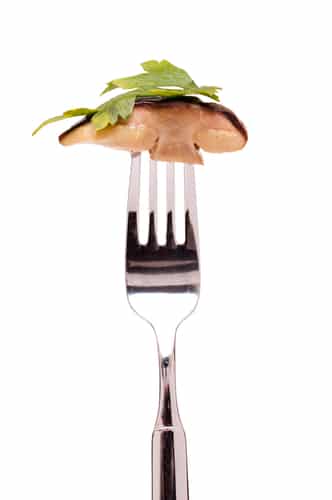 Mushrooms are a versatile addition to any meal. Besides being a good ingredient to add to stir-fries, omelets, pasta dishes, and wraps, research reveals some surprising new health benefits of adding more mushrooms t your diet. Read on and discover a new reason to toss mushrooms into your shopping cart the next time you’re at the supermarket.

It’s no secret that many people don’t get enough vitamin D. According to the Centers for Disease Control and Prevention, one out of four Americans is at risk for vitamin D deficiency. The best source of this vitamin with hormone-like features is exposure to the sun. When ultraviolet light hits your skin, it converts pre-vitamin D molecules on its surface to ones your body can modify and make into active vitamin D. But what if you don’t get outside enough? Eating mushrooms may be a way to get the vitamin D your body needs for a host of benefits including a healthier immune system and better bone health.

According to a new study, eating mushrooms exposed to ultraviolet light is as effective at raising vitamin D levels as taking a vitamin D supplement. Researchers at Boston University gave adults 2,000 international units of one of two forms of vitamin D, vitamin D2 or vitamin D3, daily for 3 months. A second group took 2,000 international units of mushroom powder and no vitamin D supplement. At the end of the 12-week study, all three groups had higher vitamin D levels and the levels were similar whether they took vitamin D2 or vitamin D3 as a supplement or used mushroom powder.

There’s other good news. You don’t have to buy the more expensive shiitake and maitake mushrooms to get vitamin D. Button mushrooms exposed to ultraviolet light are a good source of vitamin D2.

Other Health Benefits of Mushrooms

Button mushrooms have other health benefits as well. Some studies have linked button mushrooms with a lower risk for breast cancer. There are two ways eating mushrooms may lower breast cancer risk. There’s an ingredient in mushrooms that blocks an enzyme called aromatase. Aromatase converts testosterone that’s constantly being made by fat cells to estrogen.

As you may know, estrogen fuels the growth of some types of breast cancer. So button mushrooms may help to reduce estrogen levels by blocking the conversion of testosterone to estrogen. . Surprisingly, it’s the modest button mushroom that seems to block aromatase the best – and it’s readily available at your local grocery store.

Even with all of these health benefits, mushrooms are low in calories. Some mushrooms have a meaty-like texture that makes them a good substitute for meat. Ever had a portabella mushroom burger? With all the fixings, it’s as satisfying as a traditional burger – without the saturated fat. Mushrooms are also a good source of natural antioxidants you won’t get when you eat a beef burger.

Mushrooms exposed to sunlight are a natural way to raise your vitamin D levels. The question is whether you’ll eat enough of them to have an impact. You can already buy mushroom powder at some health food stores that you can stir into soups, add to chili or stews or whatever else you’re inspired to sprinkle it into or onto.

If mushroom powder isn’t to your liking, pick up containers of button mushrooms at your local supermarket. Set them in a window so they’re exposed to sunlight to help them produce more vitamin D2. Then enjoy them in any number of dishes – not just for their vitamin D but for all of the other health benefits they offer. They’re a healthy and versatile addition to your diet.

Eurekalert. “Mushrooms Provide As Much Vitamin D As Supplements”

3 thoughts on “The Surprising New Health Benefits of Eating Mushrooms”