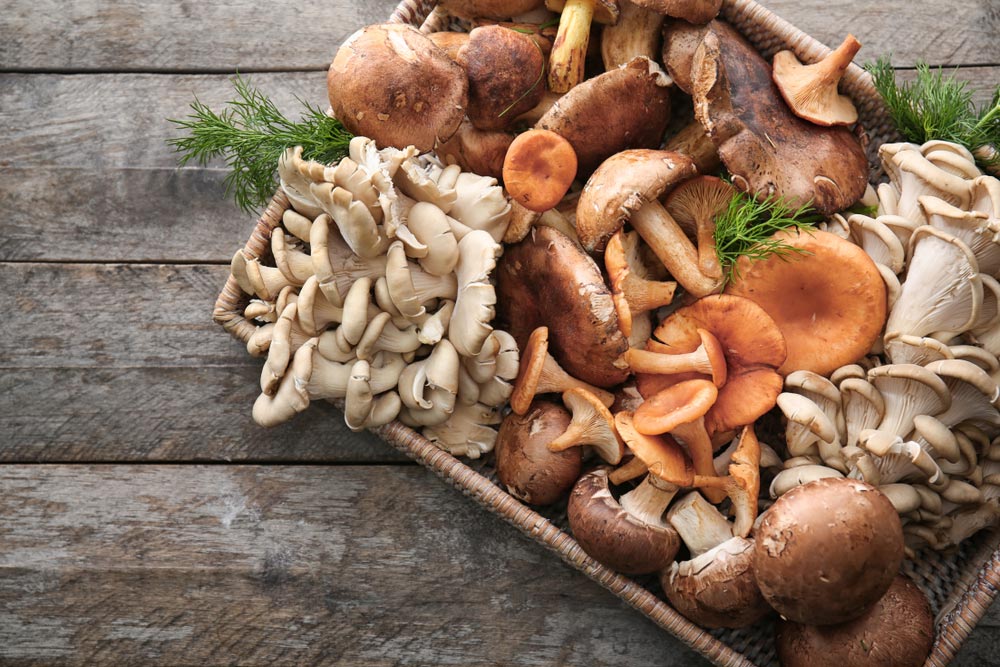 You probably think of animal foods as being the best source of protein, but plants can supply your body’s protein requirements as well. With so much interest in the environment, health, and animal welfare, it’s not surprising that people are actively exploring more plant-based protein options. Whole grains, nuts, legumes, and even some vegetables and fruits are a good source of dietary protein. In addition, some people use mushrooms as a substitute for meat. Ever had a portabella mushroom burger? They have a somewhat meaty taste if you prepare them properly, for example, roasted in an oven or popped on a grill, making them a satisfying substitute for meat from a taste standpoint – but are they really a good source of protein?

It’s no secret that protein is an important macronutrient for repair and rebuilding muscle tissue. But, protein plays a multitude of roles in the human body. For example, enzymes that help reactions run faster are proteins. Also, carrier and structural molecules throughout your body are composed of protein. In addition, you need adequate protein to maintain fluid balance, for blood clotting, and to support a healthy immune system. That’s why it’s important to get enough of this macronutrient in your diet. We know that some plant-based foods are a good source of protein and some, like soy, are complete proteins that contain all of the amino acids your body needs but can’t make. But, where do mushrooms stand?

Although a mushroom might give you some of the taste and texture satisfaction that meat does, they aren’t a good source of protein. In fact, a full cup of chopped mushrooms has only 3 grams of protein. Also, the protein in a mushroom is incomplete, meaning it lacks one or more essential amino acids your body needs but can’t make on its own. So, you’d have to eat lots of them to get a decent amount of protein. You’ll also need to mix mushrooms with other plant-based foods that contain protein to supply the missing amino acids. For example, you could saute them and enjoy them on a whole grain and have a complete protein.

On the plus, side they are low in calories, so you can eat a large quantity without the risk of expanding your waistline. You have lots to choose from! Would you believe there are more than 35,000 types of mushrooms? However, not all of them are edible. Keep that in mind if you go foraging for wild mushrooms.

Other Health Benefits of Mushrooms

Mushrooms have other compelling health benefits. According to researchers at Penn State University, they are the best source of two powerful antioxidants called glutathione and ergothioneine. As you know, antioxidants help protect cells against free-radicals that can damage their membranes and the DNA inside. In fact, porcini mushrooms have the highest levels of these potent antioxidants. Yet, even the common white, button mushroom has respectable amounts. For most people, the white button type is the easiest to find at local supermarkets.

In addition, a mushroom is one of the few types of produce that have substantial quantities of the trace mineral selenium, a mineral important for thyroid function and cellular detoxification. Some epidemiological studies link low selenium status with a higher risk of some forms of cancer. In some areas of the country, the selenium content of the soil is low. In those areas, you would anticipate the risk of selenium deficiency is higher.

Interestingly, if you expose a mushroom to ultraviolet light, they produce vitamin D2, a form of vitamin D. So, UV-treated mushrooms can be an additional source of vitamin D. But, be aware that the mushrooms you buy at the grocery store are typically grown in the dark and are not a good source of vitamin D. However, you can buy ones that are treated with ultraviolet light at some supermarkets and natural food stores. If they have been, it says so on the label. The form of vitamin D in treated mushrooms is vitamin D2 and is structurally different from the vitamin D3 from animal sources. However, recent studies suggest that both forms are effective for raising vitamin D and supplying a biologically active form of the vitamin. You can even make your own vitamin D-enhanced mushrooms by exposing them to sunlight.

Researchers at the University of Liverpool believe mushrooms have possible anti-cancer benefits that merit further research. According to Professor Jonathan Rhodes, head researcher at the university, mushrooms contain lectins that bind to and stick to cancer cells and stop them from dividing. Although it’s too early to say that mushrooms are true cancer fighters, when you combine them with the other benefits they offer, they’re a healthy addition to the diet.

In addition, studies show that common button mushrooms contain compounds that block the enzyme aromatase. Aromatase is an enzyme that converts testosterone to estrogen and this conversion can stimulate the growth of breast cancer cells. In fact, some drugs used to treat breast cancer are aromatase inhibitors. Mushrooms have chemicals that do this naturally.

Mushrooms are a delicious substitute for meat due to their umami taste and meat-like texture. Pop them on the grill and enjoy their smoky flavor, but don’t depend on them to be a major source of protein on their own. However, you can toss sautéed mushrooms into other plant-based protein dishes such as quinoa or other whole grain bowls for more protein, selenium, and antioxidants. Regardless of their relatively low protein content, mushrooms are still a healthy and nutritious food to include in your diet.