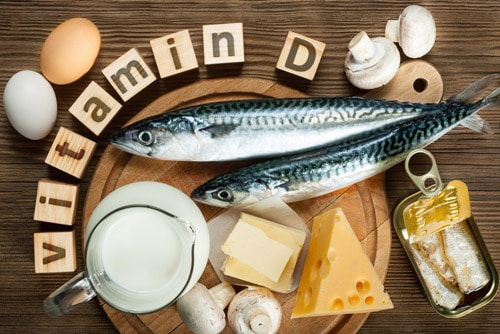 Levels of Vitamin D – it’s the sunshine vitamin, the one you need for healthy bones. It’s also a hormone-like vitamin that most of us don’t get enough of. If you live in a Northern climate, have a dark skin tone, are overweight, or over the age of 60, your risk of being deficient in vitamin D is higher than average. So, it’s not surprising that vitamin D deficiency is common.

The role of vitamin D doesn’t end with bone health. Vitamin D affects over 100 hormones in the human body, showing just how important it is for health. Vitamin D plays a role in immune function and getting sufficient vitamin D may offer protection against type 2 diabetes, autoimmune disorders, high blood pressure, and some forms of cancer, although more research is needed.

Can the lack of vitamin D impact your body composition as well? In a study published in the Journal of Clinical Endocrinology and Metabolism, researchers measured vitamin D levels in 90 young females between the ages of 16 and 22. They used imaging techniques and anthropometric measures to determine their body fat and bone density. They found that almost 60% of the participants had inadequate levels of vitamin D, showing just how common low vitamin D levels are. Low levels of vitamin D were strongly linked with higher body fat, including subcutaneous and visceral body fat (the most dangerous kind). Interestingly, there was no correlation between vitamin D level and bone density, despite vitamin D playing a role in bone health.

If you look at the other end of the spectrum, at elderly people, you also see a correlation between vitamin D status and body fat percentage. In a study published in the journal Clinical Nutrition, researchers looked at vitamin D levels and body fat percentage in participants age 55 and older. After tabulating the data, they found that low vitamin D was linked with higher levels of body fat.

The question is whether low levels of vitamin D contribute to the increase in body fat or whether the participants that already have more body fat have a harder time maintaining an adequate vitamin D level. We already know that people who are significantly overweight or obese are more likely to be vitamin D deficient. As some experts point out, fat cells tend to trap vitamin D so that it can’t enter the bloodstream or other tissues where it can be used.

However, one small study that followed 38 women and men for 11 weeks as they tried to lose weight found those who had higher levels of vitamin D were more successful at losing weight, especially abdominal fat. This suggests that vitamin D may be beneficial for fat loss.

If vitamin D is linked with less body fat and more muscle, can it help you get stronger as well? Interestingly, one of the symptoms of vitamin D deficiency is muscle weakness and fatigue. One study of post-menopausal women found that vitamin D supplementation may protect against sarcopenia, the age-related loss of muscle mass and strength. After nine months, women who supplemented with vitamin D enjoyed a 25% increase in muscle strength while those who did not, lost almost 7% of their muscle mass. As you know, your risk of falling goes up as you lose muscle tissue due to aging. That’s why it’s so important to know your vitamin D level and get it into the adequate range.

Are You Getting Enough Vitamin D?

Unfortunately, most of us are NOT getting enough vitamin D. The best source of vitamin D is sunlight. Your skin produces a compound called dehydrocholesterol. When light strikes this compound, it is absorbed by your body where it’s converted in a two-step process by your liver and kidneys to the active form of vitamin D. Most foods are not naturally high in vitamin D, although fatty fish, egg yolks, and mushrooms exposed to light are decent sources. For that reason, some packaged foods are fortified with vitamin D, including some yogurt, cereal, milk alternatives, and dairy milk.

The form of vitamin D your body makes naturally when you expose your skin to sunlight is called vitamin D3 (cholecalciferol). Some fortified products contain vitamin D2 (ergocalciferol), another type of vitamin D synthesized from plants. At one time, studies suggested that vitamin D3 might be more efficient at raising blood levels of vitamin D than vitamin D2 but it now appears that both forms are effective.

We know vitamin D plays a role in bone health due to its impact on calcium absorption but it may also play a role in taming tummy fat and warding off sarcopenia as you age. Still, optimizing vitamin D won’t take the place of watching what you eat and pushing yourself when you work out. It’s another “tweak” you can make to help optimize your physique and your health.

How Much Vitamin D Do You Really Need?