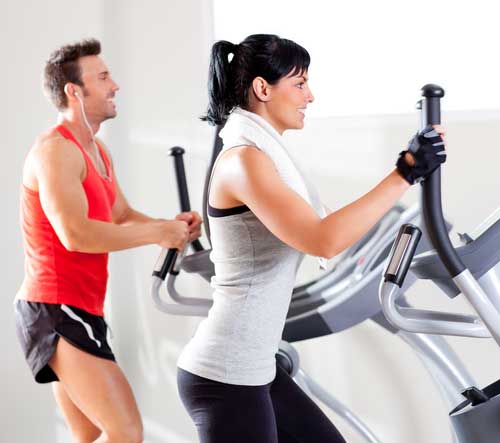 Men have some advantages over women in terms of strength. Although men and women can both build significant strength and lean body mass through training, men start out with more lean body mass than women. Plus, men have a higher level of anabolic hormones, like testosterone, which enhance muscle hypertrophy as well as larger fast-twitch muscle fibers.

How do men and women actually compare in terms of strength? Females have upper body strength that’s 25% to 55% of a male’s and lower body strength between 70% and 75% of a man’s. Men also have greater power capabilities, on average, than females. For example, elite male jumpers are capable of generating about 17% more power than elite female jumpers. Guys may be able to lift more weight than women, jump higher and sprint faster, but women have some advantages in terms of exercise endurance.

Men versus Women: Do Women Have an Endurance Advantage?

Women are better able to mobilize fat stores as a source of energy during sustained endurance exercise, giving the female sex an advantage during long periods of sub-maximal exercise. Part of this advantage may be related to the female hormone estrogen. Research suggests having higher levels of the sex hormone estrogen is an asset when it comes to long periods of endurance exercise. In fact, estrogen seems to ward off fatigue and reduce the perception of how hard exercise feels.

This advantage is most apparent during very long periods of endurance exercise, for example, exercise sustained for several hours. That’s why women compete favorably with men in ultra-endurance races that are greater than the length of a marathon. What women lack in speed, they make up for with endurance, possibly because of their greater ability to use fat for fuel once their glycogen stores are depleted.

The fact that women have more estrogen seems to give them a greater ability to burn fat as fuel during endurance exercise. Estrogen stimulates the release of epinephrine, a hormone that boosts fat breakdown and enhances the use of fat as a fuel source. Estrogen also augments the release of growth hormone, a fat-burning hormone. Why is this beneficial?

Growth hormone shifts fuel utilization towards fat stores and away from stored glycogen, thereby preserving muscle glycogen. When you’re exercising for long periods of time, anything that preserves muscle glycogen helps you sustain exercise longer. Estrogen also opens up the arteries that deliver blood to stored fat. This increase in blood flow helps increase utilization of fat as fuel during exercise.

Some studies suggest that women, due to their fluctuating estrogen levels, may perform better from an athletic standpoint during times of the month when estrogen is highest, around the time of ovulation and just after. Not all research supports this idea, although one study showed muscles recover faster after exercise when estrogen levels are highest and this may reduce muscle damage and delayed-onset muscle soreness (DOMS).

Women are able to use fat stores for energy when they exercise for long periods of time, but they have other physiologic disadvantages relative to men. V02 max, a measure of aerobic capacity, is typically lower in well-trained females versus well-trained males. Some of the best male runners in the world have a V02 max in the 80s, whereas elite female runners have a V02 max no higher than the low 70s. This puts men at some advantage when it comes to endurance events, for example, running a marathon.  For events longer than this, a woman’s ability to better use fat stores as fuel and conserve glycogen gives them a slight performance edge.

There’s also some evidence that women are better able to release heat generated during exercise, an advantage during sustained periods of exercise where lots of internal heat is generated and when working out in hot weather. For shorter term endurance exercise, the fact that males have a higher V02 max, on average, and heart and lungs that are larger in size gives them an edge.

For these reasons, it’s not surprising that the number of female ultra-endurance athletes is growing. Some women are participating in ultra-endurance races of 50 to 100 miles and competing favorably with men. In 2002, a female won the 146-mile Badwater Ultramarathon, outpacing the men in this extreme distance event. Of course, whether or not extreme endurance exercise is healthy is another story. Based on the stress this type of training puts on your body, it’s doubtful.

Men still have physiological advantages when it comes to strength, power and, to a lesser degree, endurance. Women do seem to have an “endurance edge” during long periods of endurance exercise, especially exercise that takes place in a warm environment, thanks to the ability to conserve muscle glycogen and release heat more efficiently than men.

Regardless of who has the advantage, both men and women have the ability to become stronger, more powerful and develop greater endurance through exercise training. All it takes is commitment and the desire to get better.

Men May Be Stronger but Women Have Greater Muscle Endurance