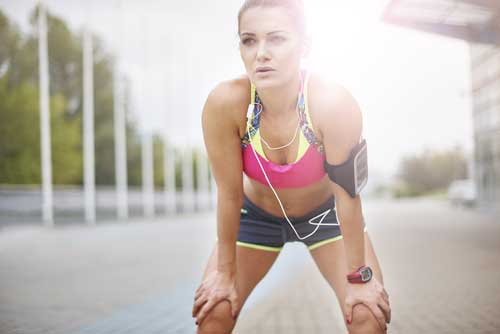 If there’s one thing you need plenty of during an exercise session, it’s oxygen. When you exercise, the demand for oxygen skyrockets as muscle cells suck it up and use it to make the ATP you need to fuel exercise. To supply the extra oxygen your muscles require, you breathe at a faster rate and your respiratory system works harder to move air in and out. The respiratory muscles called to action are your intercostal muscles that attach to your rib cage, and your diaphragm. Not only are you giving your other muscles a workout, but you’re also challenging your respiratory muscles as well.

If you do high-intensity workouts, you know how it feels to “suck air” and not be able to get it quickly enough. When you get that feeling you’ve exceeded your lactate threshold and are experiencing the drop in pH that goes along with it. It’s not a pleasant feeling – but does shortness of breath happen sooner for women than men?

Shortness of Breath: Exercise and Your Respiratory Muscles

According to research, the activity of the respiratory muscles during exercise differs between women and men. As a result, women may experience shortness of breath earlier in exercise than men. As cardiologists and exercise physiologists point out, women tend to feel more breathless during high-intensity exercise relative to men.

How do we know this? A study published in Experimental Physiology, researchers monitored the ventilatory response to maximal exercise by asking 50 young and healthy men and women to cycle on a bike at maximal intensity. After comparing the responses between men and women, the women had a greater electrical activity of their diaphragm muscle during the workout. Why might this be?

When you breathe in, your diaphragm contracts. This presses down on your abdominal cavity and expands the thoracic cavity that houses your lungs. In response, your lungs draw in air. If your lungs are healthy and you’re not exercising, your diaphragm is the main muscle doing the work. However, during exercise, your intercostal muscles chip in to take some of the load of the diaphragm.

The researchers in this study believe women have a greater electrical activity of their diaphragm during exercise because their respiratory system has to work harder to take in the same amount of oxygen due to the smaller size of their lungs and airways. Women, on average, have smaller lungs and lung capacity relative to men at all stages in life and the airways that carry air from the outside into the lungs are smaller. This means respiratory muscles have to work harder to draw in air and send the same amount of oxygen to the hard-working muscles.

What does this mean? When your respiratory muscles are using more of your energy reserves, there’s less available to keep your working muscles happy. So, you get short of breath and fatigue more quickly. So, having larger lungs and airways gives you an advantage during high-intensity exercise.

Shortness of Breath: Do Your Lungs Adapt to Exercise?

You might wonder, especially if you’re small and have a smaller lung capacity, whether your lungs adapt to exercise training and your respiratory system becomes more efficient at taking up oxygen as you get into better shape. Endurance training doesn’t significantly change the structure of your lungs or how well they function but it may slightly increase the amount of air you breathe in with each inspiration and the rate at which air diffuses from the lung into your bloodstream. The adaptations your respiratory system makes are minor compared to how your heart responds to regular aerobic exercise.

On the other hand, lung function and respiratory fatigue don’t typically limit moderate-intensity exercise performance even when you exercise at an intensity as high as your 75% of V02 max. Where it may limit performance, based on research, is at very high exercise intensities, greater than 90% of V02 max or 80% of V02 max for longer than 10 minutes. At this high level of intensity, your diaphragm may fatigue enough to cause you to poop out prematurely. Elite athletes who work out at very high intensities may find that respiratory fatigue is a limiting factor, but for most non-professional athletes it’s not a major factor.

How does respiratory fatigue limit your performance? As your diaphragm starts to fatigue, it reduces blood flow and oxygen delivery to your muscles. This causes the muscles you’re working to also tire out. After all, they need oxygen to keep producing lots of ATP. Muscle cells can make ATP without oxygen but at the price of lactic acid build-up and a drop in pH. Once that happens you’ll have to slow down or stop. Plus, the reduction in blood flow activates a reflex that constricts your blood vessels, further diminishing blood flow to the muscles you’re working.

It is possible to train your respiratory muscles to become stronger, but if they don’t significantly limit exercise performance except at very high intensities, there’s not a lot of benefit to doing so. Of course, if you don’t have healthy lungs, if you smoke or have asthma, it can very much limit your exercise performance significantly. People who have certain lung diseases may have a very low tolerance for exercise and become short of breath and fatigued very quickly.

If you’re female you likely have smaller lungs and smaller air passageways (bronchi, bronchioles) relative to men. As a result, you may experience shortness of breath sooner than a man will, especially during very high-intensity exercise. Yet you may have a slight edge during very long periods of sub-maximal exercise. Some research suggests that women have a small endurance advantage during sustained periods of moderate-intensity exercise, like running an ultra-marathon due to the ability to more efficiently burn fat as fuel. Fortunately, unless you’re a smoker or have a lung disease, your respiratory muscles rarely limit your performance.

Science Daily. “Why women have greater shortness of breath than men when exercising” November 7, 2013.