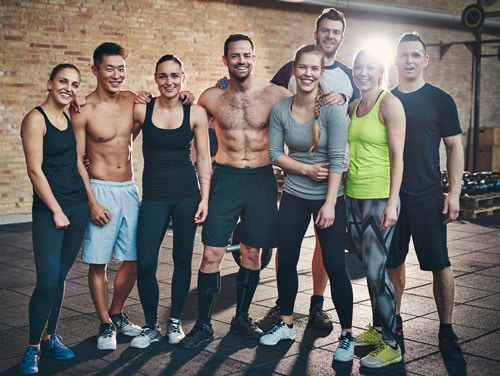 It’s a common perception that men are better athletes than women – but is that always true? In most sports, women play on their own teams based on the idea that women can’t compete with men. How much of this is social and cultural bias and how much is based on true differences in athletic ability and body composition?

Men are typically bigger than women and have a higher proportion of muscle relative to fat. Men are also, in general, stronger than women. However, strength discrepancies between men and women are more pronounced in the upper body than the lower. How do we know this?

In one study, researchers compared strength and muscle size between men and women in the elbow flexors and knee extensors. What they found was women are about 52% as strong as men in the upper body and 66% as strong in the lower body. The results showed that women also have less muscle mass in the upper and lower body relative to men. Again, the discrepancy was greatest in the upper body. Women had 45% and 41% less muscle tissue in the biceps and elbow flexors and 30% and 25% less muscle mass in the vastus lateralis in the thigh and total knee extensors.

The researchers concluded that women have a lower relative amount of muscle tissue in their upper body compared to men and this partially explains why there are significant discrepancies in upper body strength. Men also have larger muscle fibers, although a study showed individual muscle fibers are similar in strength between men and women.

These differences give men an advantage when it comes to sports that require strength and power. However, gender isn’t destiny. In 2012, a 99-pound girl named Naomi Kutin deadlifted almost 210 pounds of weight and squatted almost the same amount. In other words, she squatted almost 215 percent of her body weight. This is similar to what a strong male would squat.

Elite male marathoners typically have faster times relative to elite female marathoners. For endurance events the length of a marathon or shorter, men have an advantage. You can partially explain this by the fact that men have greater aerobic capacity or V02 max, meaning they’re better at delivering oxygen to tissues during submaximal exercise.

As far as exercise economy, some research shows that men are more economical than women, although not all studies support this idea. The main difference between men and women in terms of endurance ability comes down to men have greater aerobic capacity or V02 max.

WHY do men have a higher aerobic capacity? For one, males have a larger heart size, giving their heart the ability to pump more blood with each beat. Their lung volume and capacity are greater as well. In addition, men have a red blood cell count that’s 10% higher than a woman’s. More red blood cells mean more hemoglobin to deliver oxygen to tissues.

While these factors give men an advantage in events that are under a marathon in length, it evens out somewhat at ultramarathon distances, races that are longer than a marathon in length. Women have a slight advantage with ultra-endurance activities. The reasons for this are several-fold. For one, women are better at using stored fat as energy during endurance events. They can tap into fat more effectively, meaning that they conserve muscle and liver glycogen better than men. Glycogen depletion becomes a real issue in long endurance events. Women are better able to hold on to their energy reserves than men. That’s a distinct advantage for events requiring ultra-endurance.

Women are also better at releasing heat during long periods of exercise than men. This has to do with body surface area. People who are smaller in size, including women relative to men, have a higher surface to volume ratio. When you have a higher surface area, you have more body surface exposed to the air to release heat. Since a rise in body temperature can limit endurance, the ability to “cool off” more effectively is an advantage.

When you decrease the distance of an event to much shorter than a marathon, as short as 100 meters, men have a definite advantage. Not only does their additional muscle mass give them greater strength and power but they have the benefit of more testosterone. This makes men better at sports and events that require strength, power, and speed over shorter distances. Yet, for long events that require ultra-endurance, men and women compete more favorably. The take-home message might be to choose your distance.

However, if you dream of a woman one day outsprinting a man, you might one day get your wish. A team of researchers headed by Dr. Andy Tatem, an epidemiologist at Oxford University’s Department of Zoology applied mathematical models to Olympic 100 meter sprint results over the years. They found that the sprint performance of men and women at this level continues to narrow and shows no sign of stopping. They concluded that women will be sprinting faster than men by the year 2156. Other sports scientists disagree – but who knows? Women are improving their times more quickly than men. That’s encouraging!

All in all, men have a strength and power advantage due to having more muscle mass and testosterone. They also, at the current time, excel at endurance events less than a marathon in length, although the gap is narrowing for sprint times among world-class sprinters. Where women have the biggest athletic advantage is for ultra-endurance events.