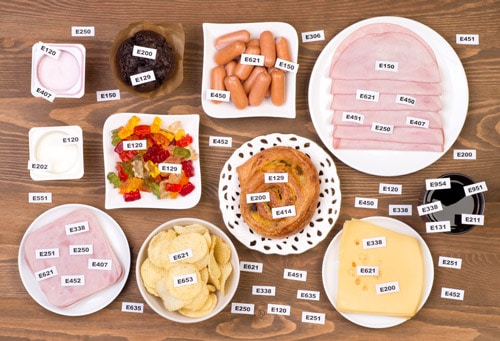 These days, the focus is turning more to eating whole foods and avoiding food and snacks that come in packages. The reason? Packaged and processed foods are often high in sugar, sodium, and unhealthy fats. Thankfully, more people are getting the connection between what they eat and how it impacts health.

For packaged food lovers times are changing. For example, until recently it was common to find trans fat in packaged foods. Now, manufacturers are reducing or eliminating trans-fat, a particularly unhealthy form of fat, from products. However, some packaged products still contain small amounts of trans-fat since “zero” trans fat doesn’t necessarily mean free of trans fat due to a loophole in the law.

Trans-fat is one issue – but what about other ingredients in processed food – like food additives? Even if you take away the trans-fat and reduce the sodium and sugar in packaged foods, there are still concerns about the other things added to packaged foods. Some people dispute that these additives are dangerous. After all, they’re approved by the F.D.A. Yet, not everyone is convinced. So, what’s the story? Are food additives safe?

What Are Food Additives?

Indirect food additives are chemicals that migrate into food from the packaging during storage. You’re probably familiar with the controversy about plastic bottles made with BPA. When liquids are stored in these bottles, especially in a warm environment, the BPA can leech into the liquid or food.

Not all food additives are necessarily unsafe. However, some have come under scrutiny in the past few years.

Emulsifiers are food additives that add texture to packaged and processed foods. You find emulsifiers in a variety of packaged foods from salad dressings to ice cream. In mice, food additives alter gut bacteria in a way that triggers tissue damage. Mice exposed to these emulsifiers develop inflammation and metabolic syndrome as well as injury to the gut lining. Whether this is also true in humans is unproven, although emulsifiers have detergent-like activity and the lining of the gut has a thin layer of mucus that is easily disrupted or damaged. Once damaged, inflammation can occur, a condition sometimes referred to as “leaky gut.” The concern is that proteins from the intestinal tract can escape through the damaged gut lining and trigger an immune response. This may be a factor in some autoimmune diseases.

Candy and beverages are more appealing when they come in pretty colors, right? Children especially like food and drink in vibrant colors. Unfortunately, some, but not all, studies show a link between synthetic food colorings and hyperactivity in kids. The link is compelling enough that the European Food Standards Agency pressured food manufacturers to eliminate artificial colorings from products. Plus, one form of red dye, red dye no.2, was removed from the market after it was linked with cancer in rodents. Yellow dye no. 5 was also linked with worsening of asthma symptoms. However, more recent research doesn’t support this, although the FDA admits that a small number of people may be sensitive to it and develop hives.

A common food additive that has sparked controversy for decades is monosodium glutamate, the manmade salt of a non-essential amino acid called glutamate. (MSG) Many foods on supermarket shelves are flavored with MSG and the FDA classifies it as “generally recognized as safe” – but is it? In the nervous system, glutamate acts as an excitatory neurotransmitter, boosting the activity of the central nervous system. Some experts believe that, under certain circumstances, glutamate can become neurotoxic and damage nerve cells. Although the FDA declares MSG to be safe, certain people experience symptoms when they consume it, including rapid heart rate, headache, anxiety, rapid breathing, flushing, sweating, tingling in the hands and feet.

Along with its role in the nervous system, glutamate is an amino acid, one of the building blocks used to make protein. You find glutamate naturally in meat, milk, mushrooms, and tomatoes, although your body can also make it when it needs it. The glutamate from natural food sources differs from manufactured monosodium glutamate (the salt of glutamate). There are concerns that manufactured MSG could, in certain people or under certain circumstances, cause neurotoxicity and damage nerve cells in the brain. It’s possible that each of us has a certain threshold beyond which excess glutamate in any form causes problems.

Just recently, another food additive has come under scrutiny. This additive called titanium oxide is in some packaged foods, particularly candy and chewing gum. Titanium dioxide in these products is nanoparticle in size, extremely tiny and capable of slipping into small spaces in the human body – but are they harmful?

While there’s no hard evidence showing FDA-approved food additives cause health problems, many experts believe we should avoid excessive exposure to them. At the very least, the foods that contain these additives generally aren’t healthy and are typically high in sodium, sugar, and unhealthy fats. The best approach? Limit your exposure and give your diet a boost by eating more whole foods in their natural state – no additives required.

6 Tips for Making Healthier Choices at the Grocery Store