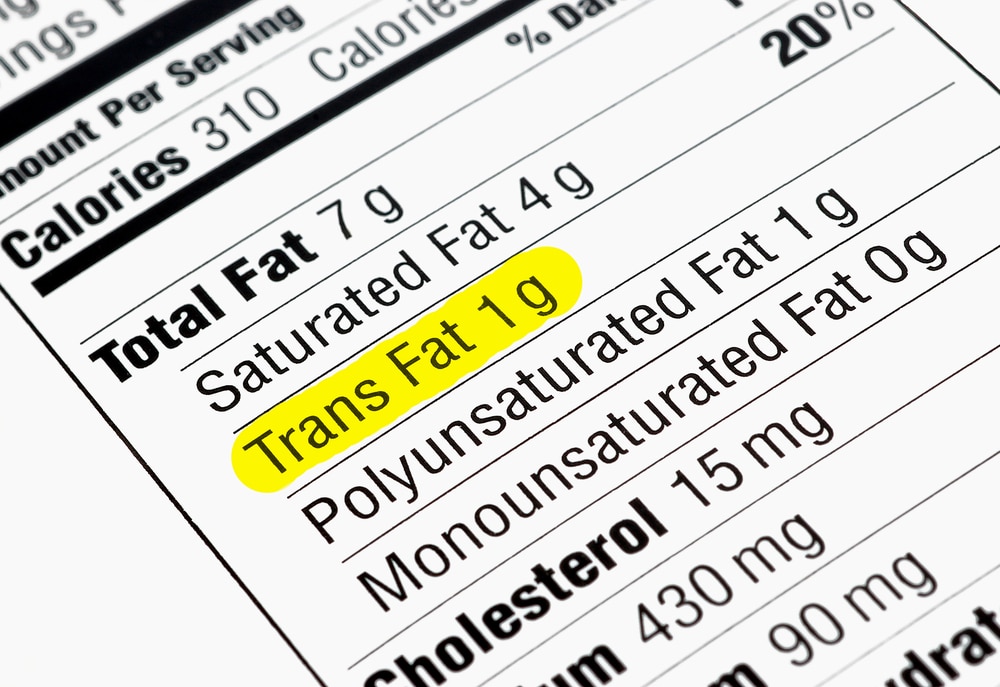 You’ve heard the mantra, “eat whole foods.” There’s a reason whole foods are better for you. Unlike processed foods where vitamins, minerals, and fibers are destroyed or removed by processing, whole foods retain the nutritional goodness that nature gave them. Plus, when you bite into food in its whole, unaltered state, you’re getting a blend of nutrients and phytochemicals that act in synergy to offer health benefits. It’s not just that whole foods retain their nutrients that make them a better choice for your health – it’s also what they lack. Here are some of the worst ingredients in processed foods.

It’s a step in the right direction – the FDA banned trans-fat more than a year ago. They’ve given manufacturers three years to reformulate their offerings to exclude this manmade form of fat. Yet, there’s a loophole that says that manufacturers can claim “zero” grams of trans-fat if a product contains less than 0.5 grams per serving. Fortunately, you can read the ingredient list and see whether an item is made with even small quantities of trans-fat. If the label lists partially hydrogenated oils, it’s not completely free of trans-fat.

Why are trans-fats such a concern? Studies have correlated these artificial fats with an increased risk of stroke and cardiovascular disease. In fact, a study published in the Annals of Internal Medicine linked as little as 40 calories a day of trans-fat with a 23% higher risk of heart disease. Plus, after New York city banned trans-fat, the rate of heart attack and stroke dropped by 6% three years after they independently banned trans-fat. The bottom line? These are fats you don’t want in your arteries.

There’s controversy about whether high-fructose corn syrup is more detrimental to health than table sugar – but neither are healthy. Unfortunately, packaged foods are often loaded with one or the other with the cheaper items mainly containing high-fructose corn syrup. The problem with high-fructose corn syrup is that it bypasses key metabolic controls when it’s metabolized. Instead of taking the usual route, it makes its way directly to the liver where it’s converted to fat without reaching the brain to activate satiety signals. So, you don’t get the same degree of satiety. Plus, when fat is stored in the liver, it leads to non-alcoholic fatty liver disease, a growing epidemic in Western countries. In mice studies, high-fructose corn syrup is also strongly linked with weight gain.

However, garden-variety sugar doesn’t get a pass either. In fact, table sugar contains 50% glucose and 50% fructose, making table sugar a source of fructose too. What’s concerning is three out of four packaged foods in the United States have added sugar – even ones that don’t taste obviously sweet. That’s why it’s so important to read labels – or avoid packaged and processed foods entirely.

Whether artificial sweeteners are directly linked with health problems, like cancer, is unproven. However, there’s growing evidence that these sweeteners come with strings attached. For one, when you eat something sweet, your body expects calories to follow. If they don’t, you might find that your cravings aren’t satiated.

Monosodium glutamate (MSG) is a flavor enhancer in a variety of processed foods and is infamous for causing symptoms of the “Chinese restaurant syndrome,” MSG is also in prepared foods at restaurants, particularly Chinese restaurants. Some people seem to be sensitive to MSG even in small amounts and experience numbness in the hands/legs, tingling, anxiety, chest pain, flushing, and other symptoms when they consume foods that contain it.

However, the Food and Drug Administration labels MSG as “generally recognized as safe.” Although there’s no hard evidence that MSG is harmful to the general population, certain groups of people are seemingly sensitive to it. If you suffer from migraine headaches, best to avoid packaged foods that contain MSG since it can be a migraine trigger for some people.

Unfortunately, MSG is hard to avoid as it’s not usually listed on the packaged as MSG or monosodium glutamate. Instead, it “hides” in other ingredients, including hydrolyzed protein, yeast extract, sodium caseinate, autolyzed yeast, soy protein isolate, and more. If you’re sensitive to MSG, it’s best to avoid all processed foods and be mindful when eating out as well.

Other Problems with Processed Foods

Some people avoid processed foods due to the artificial colorings, flavorings, and preservatives they contain. For most of these additives, there’s no hard evidence that they’re harmful, although sodium nitrates, used as preservatives in processed meats, are linked with cancer in animal studies. Plus, processed foods often contain excessive amounts of sodium and lack beneficial elements, like fiber. So, it’s best to shop the perimeter of the supermarket and avoid the foods packaged in brightly colored wrappers that contain ingredients you don’t recognize. There’s plenty of whole foods out there to satisfy your appetite.

Are Artificial Sweeteners Safe or Not?

5 Eating Habits that Age You Prematurely

Beyond Sodium: is Sugar What’s Raising Your Blood Pressure?