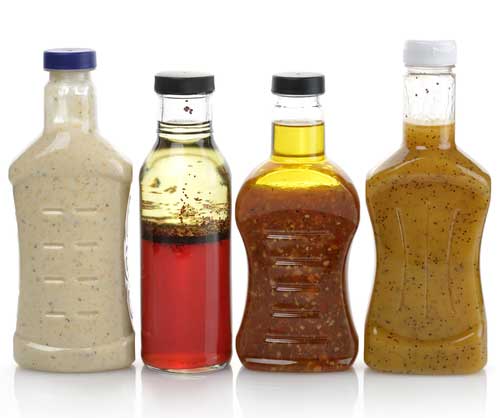 Packaged and processed foods might seem like a bargain, especially when you’re strapped for time and need to get something on the table quickly. On the other hand, these foods are a rip-off when it comes to your health. As if the added sugar, high-fructose corn syrup, hydrogenated oils, and sodium aren’t enough reason to avoid processed foods, you can add inflammation and weight gain to the list.

Emulsifiers are chemicals that make water and oil-soluble substances compatible with each other. If you’ve ever made a salad dressing, you know you have to shake the bottle to get the oil and vinegar components to mix. You’ll also notice that the two layers separate after a period of time because the two components are incompatible. Food manufacturers solve this problem by adding an emulsifier to store-bought salad dressings and other products that contain both oil and water-soluble components.

Emulsifiers are also added to other products including chocolate, processed meats, bread, baked goods, ice cream, margarine, and other items to give the products more stability and a pleasing texture. In ice cream, emulsifiers help stabilize fats and give ice cream a smoother texture.

Are Emulsifiers Linked with Health Problems Including Weight Gain?

Researchers at Georgia State University Institute of Biomedical Sciences fed mice two common emulsifiers frequently added to processed foods. The mice consumed amounts humans would be expected to get by eating a processed food diet. You may recognize their names – polysorbate 80 and carboxymethylcellulose.

What’s disturbing is the mice, after eating a diet containing emulsifiers, developed changes in their gut flora, the bacteria that normally live in the intestinal tract and keep it healthy, and the changes were pro-inflammatory in nature. The mice also developed varying degrees of intestinal inflammation and metabolic syndrome. If you’re familiar with metabolic syndrome, you know it’s linked with insulin resistance and a greater risk for heart disease, hypertension and type 2-diabetes. Plus, insulin resistance is strongly linked to weight gain and obesity.

Even more compelling is the fact that when the researchers transferred gut bacteria from mice that had consumed emulsifiers to mice without bacteria in their gut, the healthy mice developed signs of inflammation and metabolic syndrome too. Researchers now question whether emulsifiers in processed foods may be contributing to the epidemic of obesity and metabolic syndrome.

These days, science is increasingly focused on the role gut bacteria play in health and disease. Inside you are trillions of gut bacteria, many of which are “good” bacteria that help maintain digestive health. An imbalance in the “microbiome,” or communities of intestinal bacteria, is believed to play a role in immune dysfunction and inflammation as well as obesity. Studies show people who are obese have a different composition of gut bacteria relative to people of normal weight. Plus, when obese people lose weight, their gut bacteria population morphs to become more like those of a normal-weight person.

In addition, some studies show that supplementing with certain strains of probiotic bacteria promote weight loss and loss of abdominal fat. In one study, participants lost weight when supplemented with one species of probiotic bacteria and quickly regained it when they stopped the probiotic regimen. If emulsifiers really do change gut bacteria, it’s possible that they also contribute to weight gain and obesity.

Emulsifiers in Processed Foods: Are They Contributing to Obesity?

Prior to now, most people have blamed the obesity epidemic on lack of exercise and consuming too many calories – surely these factors play a role, but are they the full story? The composition of what people eat has changed drastically over time, and as researchers in this study point out, the rise in metabolic problems and obesity coincides with the introduction of emulsifiers into foods.  Maybe it’s not just the calories in ice cream and baked goods that are fueling weight gain, but also the emulsifiers added to these foods. It’s not a stretch to say that environmental factors, including things we’re exposed to through diet, our lungs, and skin, may play a role in obesity. Some researchers have tried to point the finger at endocrine disruptors like bisphenol-A (BPA) in plastics and other “obesogens” as fueling obesity, but it’s possible that additives in processed foods, like emulsifiers, are also a contributor.

Emulsifiers are only one reason to limit the number of processed foods in your diet. Here are some other compelling reasons to eat whole foods and avoid processed ones:

Processed foods contain a variety of artificial preservatives, colorings, and flavorings. Do you really need those?

Packaged and processed foods usually contain refined carbohydrates that rapidly raise your blood sugar and insulin level and drop it quickly. As a result, you feel hungry and tired soon after eating them. As a result, you eat more to boost your energy level.

Most processed foods are low in fiber and essential nutrients. So devoid of nutrients are most packaged foods that some have synthetic vitamins and minerals added back in. What they don’t replace is the fiber. As a result, most people fail to get the recommended amount of fiber each day.

Processed foods are usually made with refined vegetable oils like soybean oil that is high in omega-6 fatty acids. A high ratio of omega-6 to omega-3 fats is linked with inflammation. Some still contain the most unhealthy fats of all – trans-fats.

As you can see, there are lots of reasons to stick with a whole food diet. Packaged and processed foods may be inexpensive and convenient but that convenience comes at a cost to your health. When you visit the supermarket, make the right choices!

Medical Daily. “Fructose Can Cause Liver Damage Without Weight Gain; High Fructose Corn Syrup Is In Just About All Processed Foods.” Jun 20, 2013.