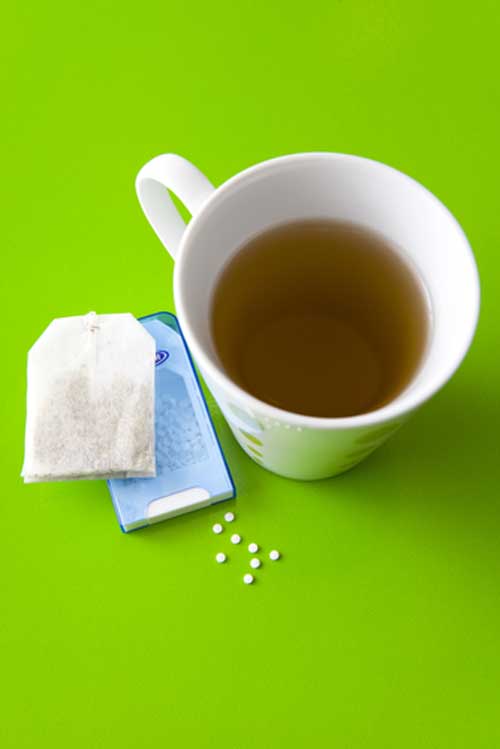 If you’re trying to lose weight and still love the taste of sugar, artificial sweeteners sound like the ideal alternative – a sweet treat that’s free of calories. Despite their concentrated “sweetness” and growing popularity, these sweeteners have the focus of controversy. People fall into two groups – the frequent users that add them to their coffee every morning and think they’re safe and the opposing camp that thinks they have no place in a healthy diet. Who’s right?

One of the most popular artificial sweeteners in recent years is sucralose, sold under the brand name Splenda. Like other sweeteners, sucralose has few calories – a single packet has 4 calories and 0.9 grams of carbs. Each packet is the equivalent of about 2 teaspoons of sugar. Compare that to a teaspoon of sugar, which has 16 calories and 4 grams of carbs. Certainly, from a calorie and carb standpoint, sucralose is the better deal. But is sucralose a healthy choice overall?

A study published in the Journal of Toxicology and Environmental Health raised some concerns about the safety of sucralose. In this artificial sweetener study, rats consumed sucralose over a 12-week period. After the 12-week period, researchers examined their feces. Upon examination, they found the rats had fewer healthy gut bacteria after consuming sucralose. As you already know, “good” bacteria in your gut help keep your digestive tract and immune system healthy. Plus, changes in gut bacteria have been linked in some studies with other health problems including obesity. The pH of the rats’ feces was also less acidic. Just as disturbing was the fact that the rats experienced changes in enzymes involved in the metabolism of drugs and medications. Such changes could make certain drugs and medications less available to the body.

Even though this study was carried out in rats, not humans, the levels of sucralose were no higher than what an average person might consume on a daily basis.

Another recent study in mice found a link between sucralose and a greater risk for leukemia, although the rats consumed sucralose from the time they were born until they died. Humans are unlikely to have such protracted exposure.

Do Artificial Sweeteners Cause Weight Gain?

Some, but not all studies, point to a link between artificial sweeteners and an increased risk for obesity, metabolic syndrome, and type 2 diabetes. Does this come as a surprise? After all, artificial sweeteners have few or no calories. One theory is artificial sweeteners cause people to eat more because they don’t satisfy hunger as well, possibly due to their lack of calories. In other words, when you eat or drink something “sweet,” your body anticipates calories. When you deliver a calorie-free sweetener instead, it creates a mismatch between what your body thinks it’s getting and what it’s actually taking in.

Sucralose isn’t the only artificial sweeter on the market. Saccharin is still available and shares supermarket shelves with newer sweeteners including aspartame, neotame, and acesulfame-K. In fact, the FDA just approved a new artificial sweetener called Advantame. This newest addition to the artificial sweetener market is 20,000 times sweeter than table sugar – the sweetest of them all.

Recently, artificial sweeteners have been joined by a growing number of natural sweeteners including ones made with Stevia and monk fruit. Although some studies in rodents raised concerns that Stevia could damage DNA or cause fertility problems, other research disputes this. Stevia has been used for centuries in areas of South America and in Japan for more than 35 years without ill effects. Although monk fruit is derived naturally, as you might expect, from a fruit, it hasn’t been well studied.

When it comes to your health, the best option is to cut back on all forms of sugar. When you use any sweetener often, you continue to “fuel” your sugar habit. By slowly cutting back on all sweeteners, you’ll gradually lose your taste for sugary foods and beverages – including ones sweetened artificially. It may take several weeks to several months to “wake up” your taste buds again so they can appreciate foods that aren’t overly sweet. Once that happens, you’ll find sweet foods you once enjoyed taste far too sweet.

If you can’t quite break the sugar habit, using Stevia in moderation is likely safe based on the research that’s out there. Some research even shows Stevia helps lower the blood glucose response to a meal. Plus, it’s 100 to 300 sweeter than sugar so you don’t need much. The key is to use it in moderation. Another way to get a taste of sweetness without artificial sweeteners is to bite into a piece of whole fruit instead of a cookie. Focus on its natural sweetness. By doing this often, you’ll learn to appreciate the taste of something naturally sweet again.

All in all, some artificial sweeteners, like sucralose, haven’t been around long enough (since 1998) to say with the assurance they’re safe. Why take a chance? Cut back on ALL forms of sweeteners and re-train your taste buds to enjoy foods that don’t have added sugar or sweetness.

What Does Sugar-Free Really Mean?

Sugar May Taste Sweeter to You Than Someone Else

Are Natural Sweeteners Really Better for You?