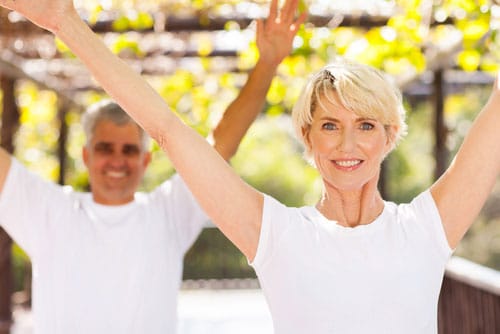 Exercise – A Recipe for a Healthy Brain Later?

Researchers from Finland and the United States questioned almost 3,600 adults about their self-perceived fitness level during middle age. The average age of the adults was 50 years old. After following the adults for 30 years, they found those who reported being less physically fit during middle age were four times more likely to be diagnosed with dementia. The strongest link between mid-life fitness and dementia risk was seen in those, not at high genetic risk for dementia.

Mild cognitive impairment isn’t severe enough to be classified as dementia. People with MCI are more forgetful than most people their age, frequently lose their train of thought during conversations, have problems making decisions and forget the names of people they’ve recently met. Even though people with this mild form of cognitive dysfunction carry out their daily activities in a relatively normal matter, MCI is a strong risk factor for dementia. People with MCI develop dementia at a rate of between 10 and 30% annually, much higher than the average population.

What happens to the hippocampus as we age? The hippocampus decreases in size and volume during late adulthood and is a prominent feature of people with mild cognitive impairment. While there aren’t many things that can reliably increase brain volume, exercise is one of them.

Researchers asked two groups of older women to take part in a six-month exercise program. One group stretched and did balance exercises twice a week. The second group did twice-weekly aerobic exercise. Prior to and at the end of the study, they had MRI imaging of their brains. The women that did aerobic training showed a 4% increase in brain volume in their hippocampus. Other research shows people with greater hippocampal volume perform better on verbal memory tests.

How does this happen? Exercise increases levels of a protein called FNDC5. A small piece of FNDC5, called irisin, breaks off and goes to the brain. For there, researchers believe it boosts levels of another protein called brain-derived neurotrophic factor or BDNF. BDNF not only stimulates the birth of new nerve cells – it keeps existing ones alive and healthy.

The fragment of FNDC5 called irisin is a molecule of interest for other reasons. Research suggests it activates brown fat, a metabolically-inefficient form of fat that speeds up your metabolism. Exercise – good for your brain and good for your waistline.

Exercise also triggers the release of mood-altering chemicals called endorphins that have a calming effect. A number of studies show regular exercise has mood-elevating benefit. As such, it may be helpful for people suffering from mild to moderate depression. In fact, some research show exercise is as effective as prescription antidepressants for treating depression – and has only GOOD side effects.

You might assume aerobic exercise is the most effective form of exercise for tuning up your brain. Not necessarily so. In one study, a group of 77 women with mild cognitive impairment resistance trained twice a week for 60 minutes over a 12 month period. Another group did aerobic exercise while still another did balance exercises.

You may have heard the saying, “What’s good for your heart is also good for your brain.” That’s certainly true when it comes to exercise. Not to mention exercise is good for every other part of your body. There’s evidence that doing brain exercises like crossroad puzzles and memory games helps keep your brain healthy but even more powerful are the brain benefits of physical exercise. So do those crossword puzzles to challenge your mind but give your brain a different kind of workout through a combination of aerobic and resistance training.

Science Now. “How Exercise Beefs Up the Brain”

US News and World Report. “Strength Training May Give Boost to Seniors’ Brains”