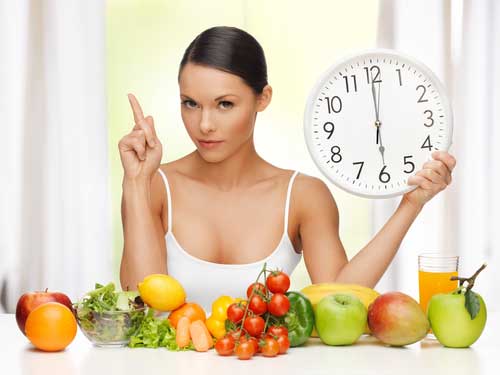 “Eat a snack every two or three hours.” “Don’t skip meals.” How many times have you heard these “words of wisdom?” Fitness trainers and experts tell clients to do this. Are they giving good advice? How important is “grazing” and should you really eat five or six small meals a day to stay lean and healthy?

Eat Often or Not?

Meal frequency may be less important for controlling weight than you think. The idea behind “grazing” is eating small, frequent meals or snacks “primes” your metabolism and keeps your metabolic fires burning. When you eat, your body expends extra energy to break down the food and process it. This extra energy is called the thermal effect of food. So, you burn a few extra calories every time you eat something. The thermic effect of food accounts for about 10% of your total energy expenditure.

Eating frequent small meals may sound good in theory but there’s little scientific evidence to supports its benefits for weight control. In a study carried out by Canadian researchers, obese adults ate either three meals a day or three meals a day with three snacks in between each meal for a two month period. Their diets were similar in composition and calories. The only difference was how often they ate. In this study, eating frequency had no effect on weight loss.

Eating frequent meals also doesn’t appear to give your metabolism a boost either. Researchers from Kings College in London found meal frequency had no effect on energy expenditure

Some research suggests eating LESS frequently may be better when you’re trying to lose weight. In one study involving type 2 diabetics, two meals a day was more effective for weight loss than the same number of calories consumed in six smaller meals. You can’t really extrapolate these findings to the general population since the participants were type 2 diabetics, but the results give little to support the idea that eating more frequently helps with weight loss.

Each time you eat something, your pancreas releases insulin to help get the glucose and amino acids from the food you eat into cells. Rapidly absorbed carbohydrates, ones that are processed or low in fiber, typically cause the greatest rise in insulin, but amino acids from protein cause insulin to be released too. Fat causes little or no release of insulin. After insulin enters your bloodstream it takes a while for levels to drop, depending on what and how much you ate.

How does this relate to frequent eating and snacking? When you’re eating often your pancreas has to continuously pump out insulin to get nutrients into cells. Therefore, insulin is spending more time in your bloodstream and has more opportunity to block fat breakdown.

When you eat smaller meals more frequently you get less insulin release with each meal since the meals are smaller. On the other hand, some studies show you release more total insulin over the course of the day when you eat more frequently. Less total insulin release would seem to be better for health. Other studies suggest eating MORE frequently improves insulin sensitivity. With so much conflicting information, it’s hard to say which approach is better for metabolic health. A new study, yet to be completed, is looking at this issue.

We’ve already talked about the thermic effect of food, how eating something increases energy expenditure for a brief period of time. Shouldn’t this work in your favor when you’re trying to control your weight? Yes and no. The thermic effect of food is real, but it depends less on how often you eat and more on how many total calories you consume. If you eat 2,000 calories a day, you’ll expend about the same amount of extra thermic energy whether you consume those calories in six meals or three.

Another Drawback of Eating More Often

Eating six times a day takes a lot of time and planning. If you don’t plan ahead and track what you’re eating and how much, you may end up eating more than you planned. Taking this approach requires close monitoring to avoid overeating.

Some studies show eating more frequently helps control hunger better than eating less often, although research looking specifically at this issue is limited. In one study a group of men ate a 675-calorie breakfast all at one sitting or in four separate sessions, eating once an hour for four hours. The group that ate more frequent mini-meals felt less hungry at lunchtime and had lower levels of the appetite hormone ghrelin.

There’s not a lot of evidence that eating more frequently will help you lose weight, but it could help you control your hunger. What really counts is how much you eat and what you eat, not when you eat it. There are certain times when eating a snack is important, for example, before a high-intensity workout, and after a workout to refuel. You need nutritional support for recovery.

The take-home message? Don’t force yourself to eat six meals a day because you think it’ll help you lose weight or rev up your metabolism. There’s insufficient evidence to support this idea. What’s more important is what you eat and how much you eat in a day, not meal frequency.

On the other hand, if eating more frequently helps you keep hunger in check, that’s a good reason to do it. No matter how you time your meals, make sure you’re getting a healthy balance of protein, unprocessed carbs, and healthy fats.

One thought on “Controlling Your Weight: Does It Matter How Often You Eat?”