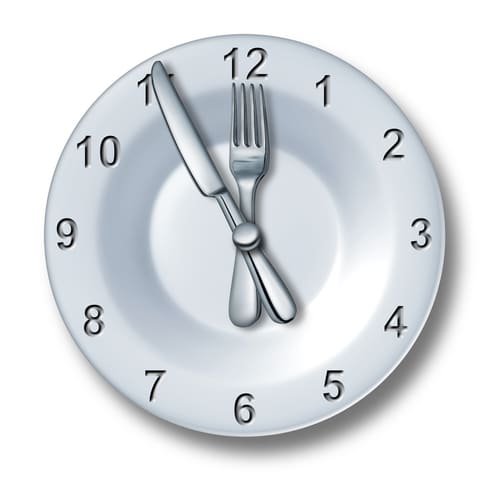 If you’re trying to lose weight, you probably think about what you’re going to eat. But new research suggests that when you eat may be as important as what you eat when it comes to controlling your weight. A team of researchers at the Academic Medical Center of the University of Amsterdam carried out a study that addressed this issue, and the results may surprise you.

When You Eat Sugar May Impact Your Body Weight

Most people who are eating a healthy diet limit the number of sugary foods and foods high in calories and saturated fat they eat since these foods contribute to weight gain. As it turns out, indulging in sugary treats may have a greater impact on your body composition when you eat them at certain times of the day.

Researchers in Amsterdam gave a group of rats either regular rat food or rat food that contained extra sugar and saturated fat. One group of rats chowed down on the food with added sugar and fat whenever they chose, while the other group was only allowed to eat the sugary, fatty chow during periods when they were inactive. Both groups of rats ate a similar number of calories. As it turns out, the rats that munched on the sugary, fatty chow when they were inactive gained significantly more weight than those that ate the more decadent munchies when they were active. Eating sugary foods during an inactive period had the most negative impact on body weight in these rats.

This latest research is consistent with previous research suggesting that the timing of what you eat impacts fat storage. Some research in mice even suggests that short periods of fasting may be beneficial for controlling weight. One study found that mice that ate a high-fat diet whenever they wanted gained weight, whereas a similar group of mice that ate a similar diet only eight hours a day and had no access to food for sixteen hours didn’t, despite eating a similar number of calories.

Why Timing is Important

These studies may have been carried out in rodents, but the same may very well hold true for humans. When you eat sugary foods and you’re moving around, your muscles are actively contracting. This means some of that sugar can enter cells without the need for insulin. Less insulin release is a good thing when it comes to controlling your weight since higher insulin levels make it easier to store fat.

It’s best to avoid sugary foods and beverages as much as possible since they have no nutritional value, but this study suggests if you’re going to splurge and eat something sweet, the best time to do it is early in the day when you’re active or right after a workout. Right after a workout, your glycogen-deprived muscles will suck the extra glucose up and use it to replace the glycogen they lost. The worse time? Before bedtime. After all, your muscles won’t be moving around much while you’re snoozing.

Limit the amount of sugar in your diet, especially sugary beverages with no nutritional value, but if you’re planning a splurge, don’t do it at bedtime according to this study when you’re going to be inactive for eight hours. It’s another small thing you can do to make it easier to control your weight.

How Ignoring Your Biological Clock Contributes to Weight Gain

Are There Downsides to Intermittent Fasting?