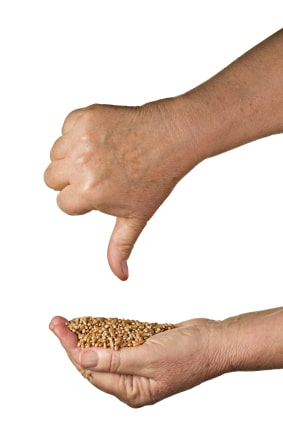 Celiac disease (CD) affects 1 in 133 people. Many don’t even know they have the disease. It’s a condition where you are not able to digest gluten, which is found in grains like wheat, barley, and rye. This type of gluten intolerance can damage the small intestine. The small intestine has many slender projections called villi that absorb nutrients. Antibodies formed in reaction to gluten will cause the villi to atrophy, making them incapable of absorbing the necessary nutrition that the body needs.

What makes celiac disease difficult to diagnose is that only 1 out of 10 people with the disease will show typical gastrointestinal problems. A third will actually have no overt symptoms of the disorder. Yet, damage to the small intestine could still be happening. About 7 % will not have any signs disease until later in life. Many people will go years before a proper diagnosis is made.

Another difficulty is that there are over 200 symptoms of CD. Many of these mimic other common conditions. Also, symptoms seem unrelated to each other. Celiac disease can look similar to thyroid disease. Irritable bowel syndrome, which can cause gas, bloating, diarrhea and constipation could also be confused with gluten intolerance. Other symptoms of CD include depression, anxiety, hair loss, insomnia, skin rashes, weight loss, anemia, infertility, osteoporosis, and fatigue.

Celiac disease is considered an autoimmune disorder. Ingesting gluten can cause the immune system to make antibodies against the lining of the intestine. These antibodies can damage other parts of the body. Blood tests are used to detect the presence of endomysial and anti-tissue transglutaminase antibodies. A person that tests positive for these antibodies will have a 95% chance of having celiac disease. A biopsy of the small intestine is another test that is done. Damaged villi will confirm CD.

Many individuals suffering from celiac disease may also have other autoimmune diseases such as lupus, rheumatoid arthritis, juvenile 1 diabetes, Sjogren’s syndrome, and Crohn’s disease.

The only way to eliminate or improve symptoms of CD is to stay on a gluten-free diet. This means that you will have to read labels of any packaged foods that you buy as gluten is used in many processed foods. Although many manufacturers will label if their products are gluten-free, they still may not be safe for someone that is highly sensitive to the protein. Most food products are not produced in a gluten-free environment, and you can pick up contamination that way.

If you have any members in your immediate family that have problems with gluten, you should all be tested for celiac disease as it is an inheritable condition. If you are diagnosed with celiac disease, the good thing is that CD can be managed. All you have to do is stay away from gluten, and your symptoms should be alleviated.

Do Processed Foods Increase the Risk for Autoimmune Diseases?

One thought on “What Is Celiac Disease?”