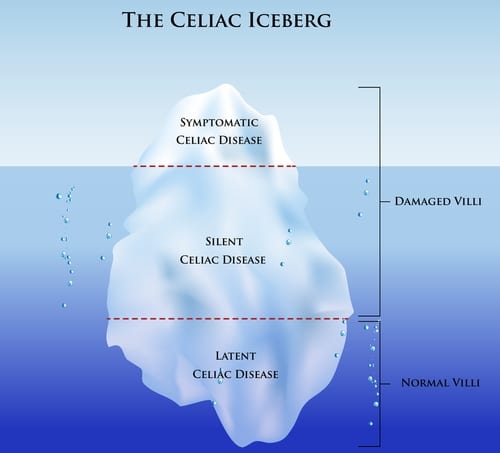 Although most people look at the gluten-free diet trend as a passing fad, it is actually a necessity for a large portion of the population. With changes in wheat’s protein structure and the ubiquitous nature of its proteins in processed foods, the number of those who have celiac disease or other levels of gluten sensitivity continues to grow.

What’s So Bad About Gluten?

Gliadin, a protein found in gluten, is a plant toxin. It attaches to cells of the intestinal lining, causing damage and escaping into the bloodstream. This activity spurs an autoimmune reaction and also causes nutritional deficiencies. The extent to which this damage takes place varies from person to person, depending on genetic disposition, general health, and lifestyle.

According to gluten specialist Dr. Tom O’Bryan, autoimmune disease–a condition in which the body attacks itself–is the most common cause of illness and death. In the case of gluten sensitivity, antibodies that are generated to attack gluten proteins mistake healthy tissue for the foreign invader.

Anti-gluten antibodies can attack anywhere throughout the body, leading to chronic conditions like migraines, rheumatoid arthritis, or autoimmune thyroid disease. Gluten sensitivity can also manifest as heart disease, attention deficit disorder, eczema, and many other symptoms of varying severity.

Fingerlike projections in the intestinal tract absorb nutrients and push along digested food. Gluten proteins damage these projections, known as microvilli. This interrupts the body’s ability to absorb nutrients, leading to nutritional deficiencies and other related health problems. Malnutrition is one reason why many who have celiac disease become underweight before switching to a gluten-free diet.

Gluten Sensitivity is Common and Difficult to Diagnose

Experts in the field say that rather than celiac or non-celiac, people fall on a scale of reactivity to gluten proteins: those who seem to be unaffected by gluten stand at one end, at the other are those who suffer debilitating symptoms after consuming a gluten-containing product.

The majority of celiac sufferers go years before they are properly diagnosed. Doctors generally know little about the disease, and symptoms range far beyond the digestive system. In fact, those who display non-digestive symptoms are far more common.

Why the Sudden Change?

Wheat has been around for thousands of years, but the strain that is contained in wheat flour and processed foods today isn’t an heirloom variety. Dwarf wheat is a genetically altered grain that was created to withstand harsh weather conditions while producing greater yields. Several decades ago, this wheat didn’t exist. It has slowly made its way into almost every product on the supermarket shelves.

Changes in this grain go beyond what the naked eye can see. Alterations made to wheat created new gluten proteins. They were assumed to be safe for human consumption, but it has now become apparent that these modified proteins are harmful to some people.

In the past, wheat was contained only in wheat-type products like baked goods. Today, this glutenous grain is contained in virtually every processed food. Overexposure may be a significant factor explaining why gluten sensitivity has steadily increased over the years.

Gluten-free diets might seem like a passing fad, but for a large portion of the population, they are literally life-savers. Research in gluten sensitivity and celiac disease is still in its infancy and largely misunderstood. Until this changes, experimenting with gluten-free diets can provide a necessary path to healing and relief for a growing number of gluten-sensitive people.

One thought on “Gluten-Free Diets: Fleeting Fads or Life Savers?”