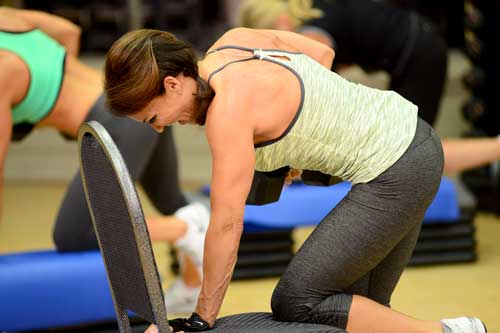 So many variables to think about when you resistance train – what exercises to do, how many sets, how many reps, how long to rest between sets, and another one many people forget  – whether to train to failure or not. Some fitness trainers push clients to train to failure most of the time, believing it’s a requirement for maximizing strength gains. The thinking goes something like this: You won’t get maximal results unless you push yourself to the limit. What does it really mean to train to failure, and are you limiting gains in strength if you don’t do so?

Training to Failure – What Does It Mean?

Training to failure is performing repetitions of an exercise to the point that you can’t do another rep using good form. If you’re capable of lifting a certain weight 8 times then you don’t stop until you reach the eighth rep, assuming you can do it with decent form. After completing a set to failure, lactic acid and other metabolic by-products build up in muscle tissue and the pH or acid-base balance drops. As you rest between sets, the by-products are partially removed and more ATP is synthesized so you recover enough to complete another set. When you rest between sets it also allows your nervous system to partially recuperate as well. When training to failure, you need longer rest periods  – 2 to 3 minutes.

Can You Maximize Strength Gains if You Never Train to Failure?

You might wonder whether training to failure is a prerequisite for becoming your strongest. It makes sense that lifting to failure would maximize gains since you activate more motor units and expose the muscle to a longer time under tension when you train to failure – but what does science say about the issue?

A study published in the Journal of Applied Physiology showed training to failure doesn’t necessarily lead to greater strength gains. In this study, 42 physically fit men took part in a 16-week resistance training program. One group performed exercises to failure while the other did not. At the end of the study, there were some interesting findings. Both groups made similar improvements in muscle strength in the upper and lower body while the guys that trained to failure experienced greater improvement in upper body endurance, as measured by the number of reps the participants were able to do on a bench press machine. Gains in power between the two groups were also similar.

Is Training to Failure Too Stressful?

What about muscle growth? If you look at the bodies of Olympic lifters, they have an extraordinary degree of muscle development – and guess what? They don’t train to failure – yet they still have impressive amounts of muscle. One key to their striking development, in the absence of training to failure, could be the volume they do. They do a low number of reps but lots of sets. This creates lots of time under tension, a major stimulus for muscle growth.

In favor of lifting to failure, at least some of the time, is a study showing training to failure leads to a greater release of growth hormone, which should give you an anabolic advantage.

Should You Train to Failure?

As research shows, you can still make strength and hypertrophy gains without training to failure. On the other hand, if you’ve reached a point where your gains are stagnant, lifting to failure on some occasions might be enough to jumpstart your gains.  It’s not something you’ll want to do EVERY workout due to the potential of overtraining your muscles and it’s important to acknowledge when your muscles have reached failure and stop.

Training to failure doesn’t mean getting sloppy. If you loosen up your form to do another rep you’ve gone too far. Some sources and experts recommend stopping just short of failure. For example, if you know you can lift a weight for 8 repetitions, put the weight down on the seventh rep rather than trying to push through to your maximum of 8 full reps. You might even pick up a lighter weight and try to eke out a final rep with less resistance for slightly more challenge.

Don’t forget that training to failure is very taxing on your muscles and your central nervous system. Training to failure too often and not giving yourself enough recovery time can lead to whole-body fatigue that makes it harder to finish your workout. That’s why pushing yourself to near failure SOME of the time but stopping short by a rep is a good compromise.

As some studies show, you don’t have to train to failure and NOT going to failure may actually build greater strength and power. Use training to complete fatigue and near failure strategically – to help you break out of a plateau or as an occasional way to challenge your muscles differently. Remember, it’s another training variable you can manipulate. Use it wisely and in moderation.

On Fitness. July/August 2015. “Repetition Failure versus Not”

Journal of Strength and Conditioning. May 2007. “The Application of Training to Failure in Periodized Multiple-Set Resistance Exercise Programs”

How Often Do You Need to Train to Maintain Muscle Strength and Size?

Are There Drawbacks and Risks of Training to Failure?

Strength Training: 2 Ways Your Muscles Become Stronger and How Training Impacts Each

High-Rep Resistance Workouts: Do They Have Benefits?

2 thoughts on “What Does It Mean to Train to Failure and is It Necessary?”