The Difference Between Subcutaneous and Visceral Fat

The Difference Between Subcutaneous and Visceral Fat 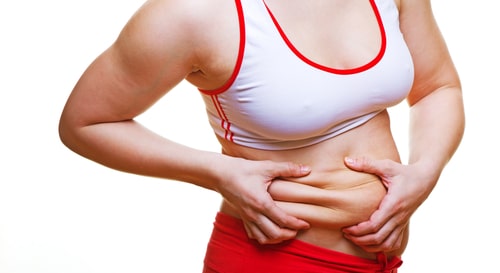 At one time, fat – all kinds of fat – were considered simple storage units. And, although storage is one function of fat, scientists now know that there is much more to fat cells. In reality, fat cells act more a part of our endocrine system. They release hormones and send a signal that has an effect on everything from growth regulation to mood swings.

Although “fat” is an umbrella term to describe excess body tissue, there are actually many different types of fat that can be found on the human body. Two types of fat – subcutaneous and visceral – are of particular interest to health aficionados and those seeking to lose extra pounds.

Subcutaneous fat is the visible type that can be found in almost every part of the body such as the hips, thighs, and arms. As the name implies, subcutaneous fat is located just under the outer layer of skin. It is often dimpled in appearance and it’s this type of fat that forms cellulite. Some subcutaneous fat is necessary to insulate and protect the body. But there are many health risks associated with too much subcutaneous fat.

Visceral fat, however, carries far more health risks. Visceral fat is also known as organ fat. It is found internally in the abdomen. It surrounds and even infiltrates the vital organs. Like subcutaneous fat, visceral fat serves in a protective capacity, but too much of this type of fat can compromise your health.

The danger of visceral fat lies in its elusiveness. A person can appear thin and still have unhealthy levels of visceral fat. Oftentimes, however, this type of fat does manifest itself as a “beer belly” or an abnormally protruding stomach. Visceral fat is associated with all manner of potentially serious health conditions such as diabetes, heart disease, stroke, high cholesterol, and high blood pressure.

Getting Rid of Visceral Fat

Studies show that people who carry fat on the inside are not as healthy as those who carry it predominantly on the outside. For this reason, getting rid of visceral fat should be high on your health priority list. But it’s important to note that crash dieting may not be the answer to getting rid of this hidden fat. In fact, researchers at Duke University Medical Center say that “yo-yo” dieting patterns can actually cause an increase in visceral fat accumulation.

A nutrient-rich, balanced diet is very important. High-sugar, high-fat, processed food lifestyles are a major cause of the accumulation of internal fat. Adopting a diet that consists of whole grains, lean meat, fruits, vegetables, nuts, and seeds is a great start to getting rid of visceral fat. So what else can you do? Another major component to losing visceral fat is exercise.

A certain amount of fat is necessary and desirable. Even people who are very lean have fat that helps protect organs and insulate the body. It’s the amount of fat, the type of fat, and where it is distributed that is a determining factor in the overall health of an individual.

Does the Type of Fat You Eat Affect Your Memory?