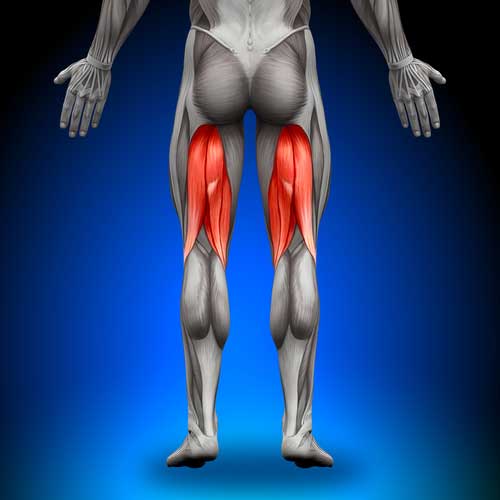 Firm, shapely hamstrings show you’re strong and physically fit, and who doesn’t want a great pair of legs?  But strong hamstrings are important for reasons other than looking buff in a pair of shorts or leggings, they generate speed, help to stabilize your knees and give you the strength you need to excel at most sports. Unfortunately, hamstrings are one of the most commonly injured muscle groups in athletes and fitness buffs of all ages. When a hamstring is injured, you may be out of commission or have to modify your workout until it heals. Who wants that? The best way to deal with hamstring injuries is to keep them from happening in the first place.

What Are Your Hamstring Muscles?

Hamstrings aren’t a single muscle – they’re made up of three large muscles (biceps femoris, semimembranosus, and semitendinosus). These muscles run from the ischial tuberosities on your pelvis, cross your knee joint and attach to tendons connected to the bones in your calf, the tibia, and fibula. Your hamstring muscles are responsible for flexing your knees and extending your hips. When you run or jump, your hamstrings not only generate force, they absorb some of the force produced when your feet hit the ground. In addition, they help stabilize your knees when you run or jump.

Not surprisingly, hamstring strains and injuries are common in runners and in people who play sports that require sudden changes in direction. Quick bursts of activity, during HIIT training, plyometrics or sprinting, also place you at risk for a hamstring injury. What can you do to prevent hamstring woes? Strengthen them. You might think you’re doing enough lower body work to keep your hamstrings strong, but most lower body workouts emphasize the quadriceps more. When you train your quadriceps more intensely than your “hammies,” you create a muscle imbalance that increases your risk for injury.

Did you know hamstring injuries are more common in women? A study published in the Journal of Strength and Conditioning Research in 2014 showed women are more “quad dominant” relative to men, carrying more strength in their quadriceps muscles relative to their hamstrings. This type of muscle imbalance is a common cause of ACL (anterior cruciate ligament) tears.

Research shows females have a higher rate of ACL injuries (2 to 8 times greater) relative to men, partially due to quad-hamstring strength imbalance, a wider pelvis, and greater ACL ligament laxity.  When the quad muscles contract, they place stress on the ACL, whereas hamstring contractions have the opposite effect. That’s why hamstring strengthening is so critical for women.

The good news is research shows 6 weeks of training that emphasizes the hamstrings can correct an imbalance between quadriceps and hamstring strength and lower the risk for ACL injury.

Other Causes of Hamstring Injuries

Reduced hamstring to quadriceps strength isn’t the only cause of hamstring injuries. Tight hamstrings also increase the risk of injury. That’s why every workout should begin with a 5 to 10 minute warm-up such as jogging in place, leg swings, etc. to increase blood flow to all the muscles in your body, including your hamstrings. Warming up prior to lifting increases body temperature, so you aren’t working cold muscles, and improves flexibility. Anytime muscles are tight, they’re more susceptible to injury. Once a workout is over and while your muscles are still warm, do static stretches to lengthen the hamstring muscles. Time spent stretching is NOT wasted time.

Finally, don’t overdo your training by trying to do a HIIT workout every day. Give your muscles time to rest and recuperate. Fatigued hamstring muscles are more susceptible to injury as are poorly conditioned muscles anywhere in your body.

The take-home message? Increase the strength in your hamstrings to counterbalance quad dominance. What are some of the best exercises for doing this? Deadlifts, including Romanian, stiff leg and sumo deadlifts, are all highly effective hamstring strengthening exercises. Resistance band hamstring curls lying on your stomach are another exercise that targets your hamstrings. What would a lower body workout be without squats? This compound exercise works your quads, glutes, and hamstrings. Increase activation of your hamstrings by widening your stance or doing box squats. This places more stress on your hamstrings as opposed to your quads. You’ll also get more glute action. Who doesn’t want strong firm glutes?

“Good Mornings” holding a barbell is another hamstring exercise that many people don’t think about, but are highly effective for developing hamstring strength. How about bench curls? Lie face down on a bench with your knees hanging slightly off the edge with a dumbbell held between your feet. Hold onto the bench tightly and slowly lower the dumbbell up and down with your feet in a curling motion. Who needs weight machines? All you need are a dumbbell and a bench.

Combine hamstring work with general conditioning and metabolic training by adding kettlebell swings to your routine. Swing with vigor and you can burn up to 20 calories per minute swinging a kettlebell – nice perk! Be sure to watch your form.

Strong hamstring muscles are vital for athletic performance, especially sprinting and jumping, but you also need them to be strong to prevent injury. Women, in particular, need hamstring work due to the tendency to have greater quadriceps strength relative to hamstring strength. Strong hamstrings lower the risk for one of the most common injuries women athletes’ experience, ACL tears. Plus, it’s nice to have hamstring definition when summer rolls around and it’s time to put on a pair of shorts.

NIH MedLine Plus. “An Athlete’s Nightmare: Tearing the ACL”

ACE Fitness. “Kettlebells: Twice the Results in Half the Time?”