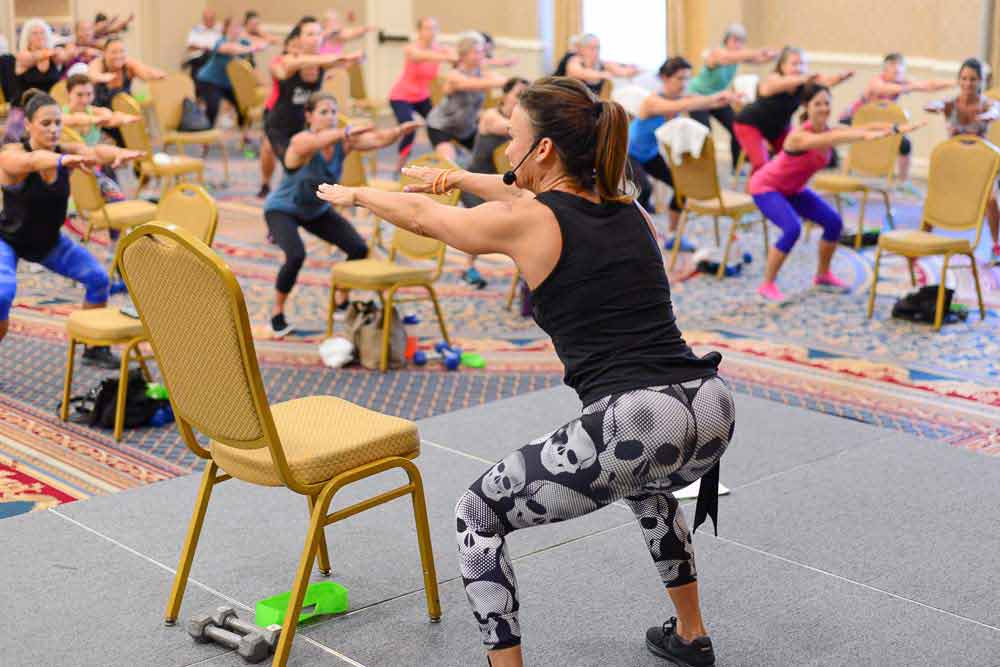 One of the hamstrings main functions is to flex the knee. However, they also have another role – they extend your hips. In fact, you depend on hamstring strength to propel you off the ground when you jump and give you power when you sprint. Hamstrings and glutes are large muscles that propel you upwards when you jump and help you break into a sprint or fast run. They also have to absorb the force that jumping and sprinting places on them. Weak hammies are less able to do this.

Building hamstring strength is especially important for women since women tend to have stronger, better-developed quadriceps relative to their hamstrings. As you know, muscle imbalances like this increase the risk of injury. One study found that 70% of athletes who suffered from recurrent hamstring strain or injury had an imbalance in strength between their hamstrings and quads. With stronger quads relative to hamstrings, the risk of tearing the anterior cruciate ligament in the knee goes up, an injury that’s all too common in female athletes. Plus, toned hamstrings look great when you wear a pair of shorts!

When you work your hamstrings, what exercises do you do? The most popular lower body exercise is the squat. Squats are a compound exercise that work multiple muscle groups. We know it’s a highly effective exercise for building strength – but how well does this workhorse of the exercise world really target the back of your legs?  Not as much as you might think. In short, you work the hamstrings muscles most with exercises that involve hip extension or knee flexion. When you squat, you extend your hips but you also extend your knees. EMG studies show that the best exercises for hamstrings are ones that emphasize knee flexion, not extension, and the squat doesn’t meet this criterion.

Despite being a popular exercise for the lower body, squats, based on the limited EMG data that’s available, isn’t the best exercise for working the biceps femoris. Even when you change your foot position it doesn’t really blast the hamstrings hard. Also, whether you use barbells or dumbbells has little impact on hamstring activation as well. What does activate the hamstring more is increasing the tempo with which you squat. Increasing the velocity of squat repetitions appears to activate the hamstring more than using a slower tempo.

If squats aren’t especially effective hamstring activators, what are the best exercises for working your hamstrings? If you’re looking for an effective compound movement for your hammies, deadlifts are a good option. Based on EMG data, deadlifts and deadlift variations, including stiff-legged deadlifts, and sumo deadlifts, are powerful hamstring activators. In one study, based on EMG data, Russian curls and leg curls are the most powerful activators of the hamstrings. Another exercise that effectively activates the hammies are good mornings.

In case you’re not familiar with good mornings, they’re a hip-hinge exercise that strengthens the entire posterior chain. To do them, place the bar across the back of your shoulders. Step away from the weight rack. Take a deep breath and bend at the hips with the weight on the back of your shoulders. Move your hips back as you bend down to around 15 degrees above parallel.  To return to the starting position, push your hips forward as you lift up. Breathe out at the top of the movement. You can also do an easier version by doing the exercise holding a dumbbell in front of your chest.

Since your hammies have two main parts, medial and lateral portion, a well-balanced hamstring workout should target both as some exercises place more emphasis on one part or the other. For activation of individual parts of the hamstrings, medial versus lateral, kettlebell swings and deadlifts place more emphasis on the medial hamstrings, the semimembranosus and semitendinous, while back extension and leg curls, hit the two heads of the biceps femoris more.

What’s the Best Strategy for Targeting Your Hamstrings?

Squats and their variations shouldn’t be the main exercises you use to build hamstring strength as they aren’t the most effective. The best compound exercise might very well be the deadlift and its variations. However, deadlifts mainly target the medial hamstring muscles. Be sure to also include exercises that more closely target the lateral muscles, the biceps heads as well. Good options are kettlebell swings, Romanian deadlifts, and single-leg glute bridges.

The most important point is to diversify your lower body workout so you aren’t so focused on “the king of exercises,” as squats are sometimes called. Instead, do a diversity of exercises, including ones that place more emphasis on your hamstrings. Also, when you do squats, vary the tempo a bit and include some sets where you use a rapid tempo since this targets the hamstrings more.

For strong, powerful hammies, think beyond the squat. Make sure deadlifts are part of your routine and that you do an exercise that builds power such as kettlebell swings. Be sure to include exercises that work both the medial and lateral hamstrings as well.