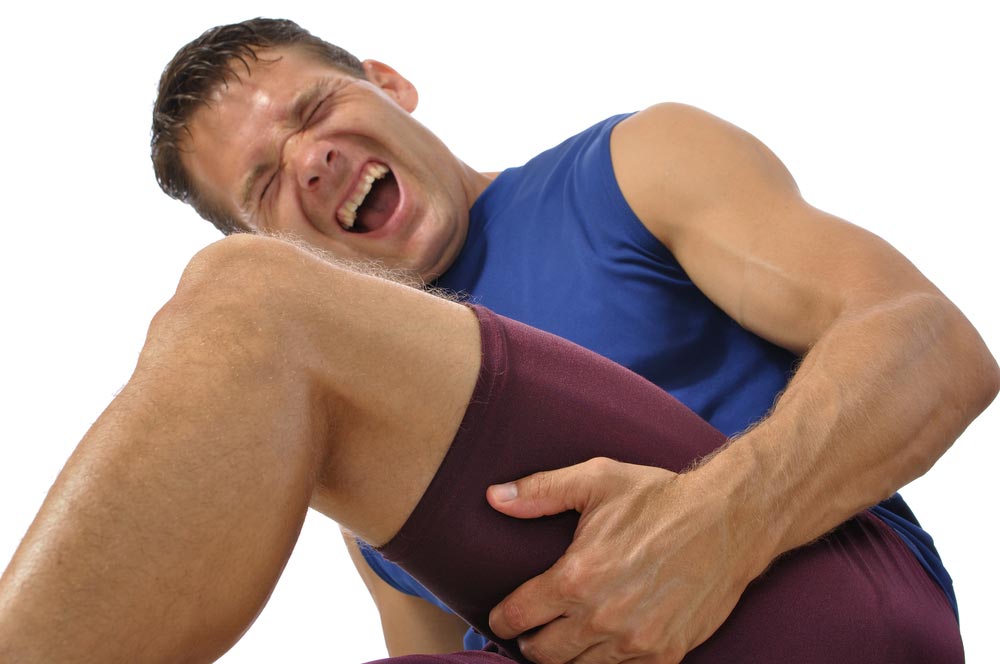 Have you ever been in the midst of running or doing some other form of exercise and suddenly felt a sharp pain in the back of your thigh? Ouch! When the pain didn’t go away, you realized you had strained a hamstring. The discomfort of a hamstring strain at best can linger. At worst, it can make it impossible to exercise for weeks. That’s why it’s important to prevent hamstring injuries rather than deal with them after the fact.

How Common Are They?

Hamstring strains are one of the most frequent injuries that athletes and active people experience and they’re most common among sprinters. The symptoms of a strained hamstring can be rather mild, a slight discomfort when you move the injured leg a certain way, or severe, pain to the point that you can’t exercise. The former would be a grade one hamstring strain while the latter would be a grade 3. Grade 2, of course, is somewhere in between. Occasionally, a sudden hamstring strain of a grade 3 magnitude can trigger a snapping or popping sound followed by pain. If you experience this, stop exercising immediately. In severe cases, this muscle can tear and require surgery.

You’re probably already familiar with how to treat a mild, grade 1 hamstring strain. Your health care provider will probably tell you to apply ice to the hamstring to reduce swelling. You would then elevate the leg as much as possible and, depending upon how severe, do gentle stretching exercises. Of course, the affected hamstring also needs to rest. However, the best way to reduce the discomfort and inconvenience of a hamstring strain is not to get one. In fact, there are some factors that increase your risk of hamstring strains and correcting these factors may help you avoid a painful and inconvenient hamstring injury. Here are some of the most common factors that increase the odds of getting one.

As you know, you have muscles along the front of your thigh that extend the thighs. These muscles are collectively referred to as the quadriceps muscles. The four muscles that make up the quadriceps are among the strongest in the human body. You depend on their strength to help propel you out of a chair and to climb stairs. You also use them when you walk and run.

Then, there are the hamstring muscles in the back of your thighs. The three muscles that make up the hamstrings are the:

If muscle strength between the two opposing muscle groups, the quads, and hamstrings, are roughly equal, the muscles work in harmony and there’s no need for one set of muscles to pull more weight. On the other hand, it’s quite common, especially in women, for the quads to be stronger than the hamstrings. This forces the hamstrings to work harder to compensate, especially during intense exercise like sprinting. Plus, the hamstrings may fatigue faster than the quads due to their inferior level of strength and conditioning and this can cause the hamstrings to become strained. The key to preventing this, of course, is to correct the muscle imbalance by strengthening the hamstring muscles.

Lack of a Proper Warm-Up

It’s easy to skimp on warming up before you run or otherwise place stress on your hamstrings but it’s worth it. Doing a 5 to 10-minute warm-up elevates the temperature of your muscles, including the hamstrings. Warm muscles are less prone to injury relative to cold ones. Plus, a warm-up increases hamstring flexibility and this, in turn, lowers the risk of straining a hamstring muscle. Remember, tight hamstrings are a risk factor for hamstring strains. Warming the muscle up and decreasing tightness is one key to lower your risk. That extra 5 or 10 minutes you spend doing this is worth it, especially when you consider the inconvenience of an injury.

Can weak core muscles affect your hamstrings? Yes! Your muscles are connected as a unit, forming a kinetic chain that works together to help you stabilize your body and move properly. You need a strong, stable core to keep your pelvis stable when you run. If your core muscles are weak, the hamstrings are forced to work harder to make up for the inability of the core and pelvis to keep you stable. So, the hamstring muscles tighten to take up the slack and become more prone toward injury. The solution is to strengthen and stabilize your core muscles, not just with ab exercises like crunches, but with exercises that work all the muscles in the core. In fact, a study found that core stabilization training reduced the risk of hamstring reinjury significantly more than rehabbing injured hamstrings via stretching.

Do you work in an office where you sit most of the day? Sitting does a number on your hip flexors by causing them to shorten and tighten, particularly the iliacus and the psoas. In extreme cases, tight hip flexors force the pelvis to tilt forward, a posture called anterior pelvic tilt. Not only does anterior pelvic tilt throw your posture off, but it also places added stress on your hamstrings when you run, thereby placing you at higher risk of injury.

The key to correcting this problem is to strengthen your glutes and hamstrings and loosen tight hip flexors with hip flexor stretches. Also, break up periods of sitting at work and make sure you’re using good posture when you are forced to sit.

If you’re ever strained a hamstring before, you’re at higher risk for one in the future. If you fall into this category, make sure you’re warming up properly before working out. Also, work on core and hamstring strength and on correcting muscle imbalances. According to a 2004 study, the strongest risk factor for a hamstring injury is a previous history of one.

So, now you have a better idea of how to prevent hamstring injuries. For one, it’s important to strengthen your glutes, thighs, and core but also to do a balanced workout. Remember, females tend to have stronger quads than hamstrings. Also, do a thorough warm-up before doing any type of more intense exercise.

All About Hamstring Injuries & How to Prevent Them

More Than a Leg Exercise: 5 Reasons to Love Lunges

A Powerful Glute Activator to Add to Your Strength-Training Routine