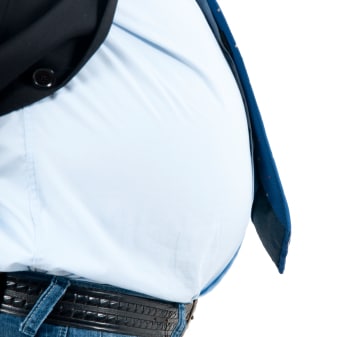 Is obesity a lifestyle issue or is it more related to genes? When you look at the way obesity clusters in families, it would certainly seem that genetics play a role. On the other hand, families usually have similar eating and exercise habits too. What role does genetics play in obesity?

Is There an Obesity Gene?

In 2007 researchers discovered a gene variant called FTO that affects chromosome number 16. Variants in this gene play a strong role in determining how much body fat an individual will have during childhood and as an adult. How much of an impact the gene has on body weight varies with whether a person inherits both copies of the gene variant or a single copy.

People who have a duplicate copy of the obesity gene will likely carry more body fat than a person who inherits only one copy. Having a double copy of the variant gene boosts the risk of obesity by up to 50 times.

This gene was discovered in the European population, and it’s surprisingly common. Almost half of all Europeans have a single copy of the FTO gene variant, while 16% have a duplicate copy putting them at very high risk for obesity. An individual with this gene variation will weigh on average 4 to 7 pounds more than someone without the gene.

This gene variant is also linked with another health problem. UCLA scientists recently discovered that people with this gene have less brain tissue in areas of their brain and the gene may predispose them to brain diseases such as Alzheimer’s disease. It may partially explain why people who are obese have a higher risk of Alzheimer’s disease.

How Does The Obesity Gene Cause Obesity?

The FTO gene variant doesn’t appear to alter a person’s metabolism. It increases the risk of obesity by boosting appetite and food intake. Exactly how the gene affects appetite and whether it directly alters levels of appetite hormones such as leptin and ghrelin is still unclear. People with the gene appear to be more predisposed to eating energy-dense foods, which explains most of the weight gain.

Is There a Cure for Genetic Obesity?

There isn’t a pill you can take to silence the FTO gene, but there is a way to reduce its impact. Studies carried out on adolescents and adults with this gene variation show that physical activity reduces the amount of weight gain people with this gene experience. Moderate to high-intensity exercise for an hour a day is the best prescription for warding off obesity in people who are predisposed to it due to genetics. One more reason to maintain an active lifestyle and a regular exercise program.

Not all obesity can be blamed on genetics. Some people have learned bad eating habits and are too inactive. Others are emotional eaters. For the majority of people, obesity is a product of both genes and environment. The good news is even people who have this obesity gene variant can control their weight with regular exercise.

Obesity Genes: Are Genetics Destiny When It Comes to Controlling Your Weight?

Is Being Physically Fit or Fatness More Important for Longevity?

Obesity Genes: Are Genetics Destiny When It Comes to Controlling Your Weight?

New Study Reveals Why Some People Stay Lean So Effortlessly

Obesity and Genetics: Can You Blame Obesity on Bad Genetics?

Does Obesity Start at the Cellular Level?

What is the Thrifty Genes Hypothesis?

Parents Versus Partner: Who Impacts Your Risk of Obesity More?