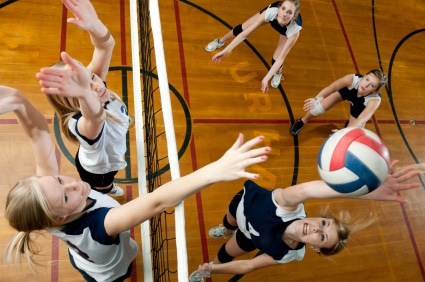 Everyone needs good nutrition, but for athletes, diet planning takes on greater importance due to their higher energy requirements. People who eat a varied diet of both meat and plant-based foods usually have no problems meeting their nutritional needs as long as they don’t restrict calories too much. On the other hand, athletic vegetarians and vegans who exclude meat, dairy or both from their diet have to plan more carefully to avoid nutritional deficiencies.

A sedentary person needs about 0.8 grams of protein per kilogram of body weight, but athletes who work out at a high intensity may need as much as twice that amount, especially if they’re trying to build lean body mass. Vegetarians that eat dairy products usually have an easier time fulfilling their protein requirement than vegans who get their protein exclusively from plant-based foods.

Athletes who get their protein exclusively from plant-based foods have to combine protein sources to get all of the essential amino acids they need but their body can’t make. For example, lentils have the essential amino acid lysine, but they lack methionine. By combining lentils with brown rice, which is a source of methionine, a vegetarian or vegan can get a complete source of protein.

According to the World Health Organization, the protein in plant-based foods also isn’t absorbed as well as protein from meat sources, so vegetarian and vegan athletes need to increase their protein requirements by about 10% to make up for the reduced absorption.

Vegan athletes can meet their protein requirements by combining beans, lentils and whole grains to get a complete source of protein. Other good non-meat protein sources are soy-based foods like tofu, tempeh, and seitan, often called “wheat meat” since it’s made from wheat gluten. Vegans and vegetarians can also get protein from eating nuts and seeds. Some vegans may benefit from using vegan protein powder as a supplement if they have difficulty meeting their requirement through food.

What about Carbohydrates and Fats?

Other Potential Nutritional Problems in Vegetarian and Vegan Athletes

Iron deficiency is another problem among vegan and vegetarian athletes. Iron is found in greatest quantity in animal products. Some plant-based foods contain iron, but iron from plant foods isn’t absorbed as well as from animal products. Low iron levels are common in young female athletes that restrict calories or don’t eat meat. When iron levels are low, it can lead to anemia, which can have a major impact on athletic performance. Iron-deficient athletes feel tired and have reduced tolerance to exercise and their performance suffers. Athletes that don’t eat animal products should check their iron levels every 6 months.

Vegan athletes are at higher risk for low calcium levels since they don’t consume dairy products. Lack of calcium increases the risk of bone loss and fractures, especially in small-boned, underweight women. Fortunately, there are plant-based sources of calcium such as fortified tofu, leafy greens, broccoli, and lentils, but like iron, the calcium in plant-based foods isn’t as easily absorbed.

Zinc is a trace mineral that humans don’t need in large amounts, but it plays a critical role in growth, fertility, wound healing and immunity. Vegetarian and vegan athletes are at greater risk for zinc deficiency since it’s found in the largest quantity in animal foods. The best plant sources of zinc are whole grains, nuts, lentils, beans, and seeds. Zinc also isn’t as well absorbed from plant-based foods as it is from meat.

There are many healthy athletes that eat a vegetarian or vegan diet, but vitamin and mineral deficiencies are more common, especially among female athletes who eat a low-calorie diet. Fortunately, with a little planning, a vegetarian or vegan athlete can meet their nutritional requirements and perform at a high level.

Is a Plant-Based Diet More Effective for Weight Loss?