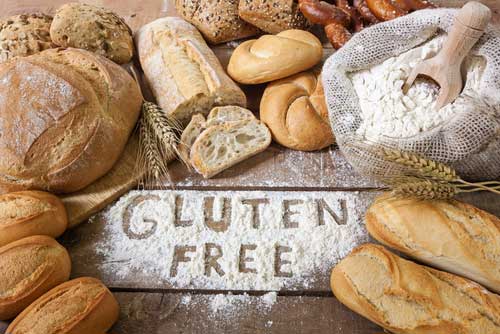 In case you haven’t heard, going on a gluten-free diet is trendy. For at least 1% of the population going gluten-free is essential for good health. That’s because they have a condition called celiac disease that’s exacerbated by eating even small amounts of dietary gluten, proteins found in cereal grains. The two most common gluten proteins are gliadin and glutenin. It’s these proteins that give bread its strength, elasticity, and ability to rise when you bake it. Gluten serves a useful purpose but some people can’t tolerate it. For those with celiac disease, consuming gluten can have devastating consequences.

Celiac disease is an autoimmune disease marked by inflammation and damage to the small intestines brought on by consuming gluten. It has a strong genetic component and the only treatment is to avoid foods containing gluten such as wheat, rye, barley, and its derivative, including a hybrid between wheat and rye called triticale. People with celiac disease who don’t eliminate gluten can have problems absorbing nutrients and ongoing intestinal inflammation. They’re also at higher risk for cancer of the intestinal tract and infertility.

Health professionals now realize that up to 10% of the population is intolerant of or sensitive to the gluten in wheat, rye, and barley. These folks don’t experience the small intestinal damage and inflammation that people with celiac do, but they have intestinal symptoms as well as other symptoms unrelated to the intestinal tract when they eat gluten-containing foods. These symptoms may include bloating, flatulence, feeling tired, brain fog, or headache, among others. People sometimes refer to non-celiac gluten intolerance as a wheat allergy, although this is a misnomer.

When you have IgE antibodies directed against wheat proteins, your body mounts an immune response when you’re exposed to wheat. The response can be mild, such as hives, or deadly. In severe cases, you might experience difficulty breathing, swelling of the face and throat, or even got into shock when you consume wheat. People with wheat allergies may experience intestinal symptoms like abdominal cramping or diarrhea, but unlike celiac disease, a wheat allergy doesn’t cause ongoing intestinal inflammation. Other common symptoms of an allergy to wheat are watery eyes, headaches, nausea, achy joints. People who have a wheat allergy are often allergic to other foods as well.

Interestingly, if you have a wheat allergy, you can still eat other gluten-containing grains, including barley and rye, as long as the food is free of wheat. Gluten itself is not what causes the reaction – it’s other proteins in wheat. However, keep in mind that around 20% of kids with a wheat allergy are also allergic to other grains.

Wheat allergies are one of the nine more common causes of food allergies, along with eggs, soy, tree nuts, peanuts, fish, shellfish, sesame, and milk. Unfortunately, avoiding wheat is difficult if you eat packaged foods. Items you might not suspect, including baking powder, beer, sauces, hydrolyzed vegetable protein, salad dressings, and more contain wheat. Even non-food items can contain enough wheat to cause a reaction if you’re very sensitive. So, you have to be well-educated about wheat allergies and what to stay away from or avoid packaged foods entirely.

Fortunately, it’s gotten easier to avoid wheat. Federal law now requires all packaged foods in the United States must list “wheat” on the ingredient list if any is in the product. Even though you can eat whole grains that are free of wheat if you have a wheat allergy, some whole grains are cross-contaminated with wheat, so it may be easier and safer to go completely gluten-free.

Celiac disease, wheat allergy, and non-celiac gluten intolerance are three distinct entities, although they’re all diet related and improve once you remove the problem substance from your diet. If you suspect you have one of these problems, first get tested for celiac disease and wheat allergy. If your tests show you probably don’t have these conditions, remove all traces of gluten from your diet for three weeks and monitor your symptoms. If your symptoms go away, you are likely sensitive to gluten and should avoid it.

Always get tested for celiac disease before going on a gluten-free diet. If you stop eating gluten beforehand, the test may be falsely negative. Your own health care practitioner can give you further guidance on what tests you need and how to get them. If you’re having digestive symptoms or other symptoms you can’t explain, testing for celiac disease and food allergies, in general, is a smart idea.

Celiac Foundation. “What is Celiac Disease?

Are Whole Grains Good or Bad for Your Gut and for Your Health?

9 Products That Will Ruin Your Gluten-Free Diet