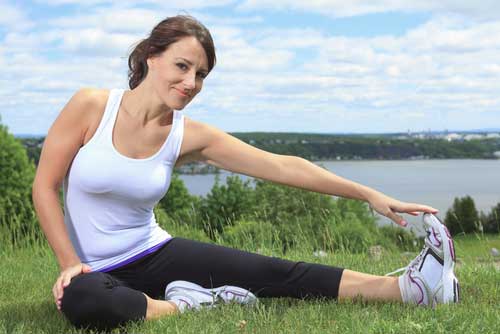 If you’re like most people you’re working out to look better, feel better and reduce your risk for health problems like heart disease, osteoporosis, and sarcopenia. But there’s another reason to engage in regular physical activity – to protect your brain.

Some people play brain games and do puzzles to help keep their mind sharp, but a growing body of research showing it’s physical not mental activity that’s most effective for preserving healthy brain cells. Now a new study further supports this idea by finding a link between mid-life fitness and better brain health at age 60. Stay in shape now and reap the benefits later!

In a new study, researchers at the Boston University School of Medicine looked at the link between mid-life fitness and brain health later in life. They asked 1,270 people to exercise on a treadmill when they were in their early 40s to evaluate their fitness level. Then, once the participants reached their 60s, they used MRI imaging to estimate their brain volume and mental agility tests to test how cognitively sharp they were.

The results? Participants who had a higher fitness level in their early 40s, as measured by heart and blood pressure response to treadmill exercise, had greater brain volume at age 60. They also performed better on mental agility and decision-making tests.

Of course, this doesn’t necessarily prove that being physically fit directly caused less loss of brain volume. People who are physically fit are more likely to eat a healthy diet and make wholesome lifestyle choices. Still, the idea that exercise helps prevent age-related cognitive decline is supported by other research studies.

How does your brain change as you grow older? Brain function is at its peak during early adulthood. You begin to lose nerve cells as early as your late 20s. By the time you reach your late 30s, it may take longer to memorize a list of words and understand new concepts. You may not be so quick at remembering someone’s name you haven’t seen in a while. Embarrassed, you jokingly hit yourself in the head and say you’re “losing your mind.” More like you’re just losing some neurons and the ones that are there aren’t moving as fast. By the time you reach your late 50s and early 60s, you begin to experience measurable loss in brain volume as your brain shrinks in size.

This certainly isn’t the first study to show exercise enhances cognitive function – but how? When you do endurance exercise, your brain produces a protein molecule called irisin. This protein, produced by contracting muscles, helps to protect nerve cells against damage related to oxidative stress. Exercise essentially turns on pathways that protect the brain and nerve function. Irisin has another benefit too. It converts white fat, the blubbery fat you’d like to see less of on your hips, thighs, and tummy, into metabolically active brown fat, thereby giving your metabolism a boost. Score two for irisin and exercise.

Exercise may reduce brain shrinkage associated with aging, but can it actually improve cognitive function? In one study, researchers tested 62 seniors, men, and women, who worked out vigorously with 62 senior couch potatoes.

Did the active seniors have an edge? On certain measures of intelligence, the group who exercised performed better, including tests involving short-term memory and reasoning. Even when they controlled for age and educational status, the exercise group performed better than the sedentary seniors from a cognitive standpoint. A number of other studies support the idea that habitual exercise improves some aspects of cognition in normal, healthy people. You’re giving your brain a kickstart each time you exercise!

How Does Exercise Improve Brain Health?

We’ve already talked about the role irisin, released by muscles in response to exercise, plays in brain health. Exercise also increases oxygen delivery to the brain, ensuring that no area of the brain goes without the oxygen it needs. One study showed seniors who stayed active after retirement maintained higher levels of blood flow to their brain than inactive ones. One of the benefits of exercise is that it improves aerobic capacity. Your heart becomes more efficient at pumping oxygen to tissues, including your brain.

Why is this important? Areas of the brain that produce certain neurotransmitters are especially sensitive to low oxygen levels. Neurotransmitters are chemicals released by nerve cells, or neurons, which allow one neuron to communicate with another. When the levels of some neurotransmitters decline, as happens with aging, it can lead to various degrees of cognitive impairment[FD1]. Exercise also speeds up nerve transmission and enhances communication between nerve cells. With age, comes slowing of the speed at which information is processed. That’s the primary reason memory and recall become slower with age.

You may have heard the phrase, “What’s good for the heart is good for the brain,” and exercise is good for both. Regular workouts lower blood pressure and contribute to a healthier lipid profile. Both of these factors protect your blood vessels against damage and build-up of arterial plaque. Once plaque reaches a critical level, a portion can rupture, leading to the ultimate brain insult, a stroke, and death of brain tissue.

Exercise also enhances blood vessel health another way, by stimulating the release of nitric oxide, a chemical that relaxes blood vessels and reduces stress on the blood vessel wall. Exercise isn’t a “one trick pony,” it protects your brain and enhances cognitive health in a number of ways.

Regular exercise, both aerobic and resistance training, combined with a healthy, whole food diet is the best way to shield your brain against the effects of aging. When you consider all of the health benefits of working out, you realize it’s the best prescription there is for a healthy life and healthy aging.

MedLine Plus. “Aging changes in the nervous system”

EMax Health. “Brain function peaks at 24, but it’s not all downhill”

The Boston Globe. “Older and wiser? Some brain functions improve as we age”