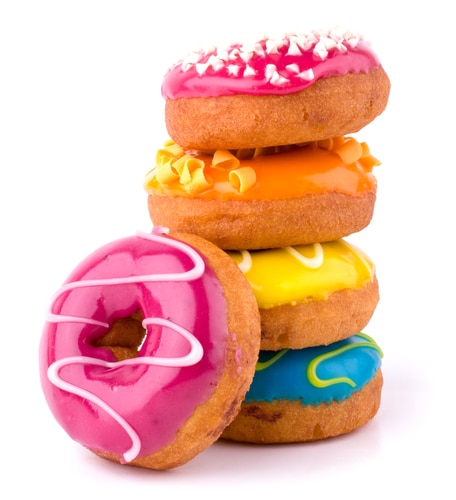 Pick up almost any packaged food or drink and it likely contains added sugar – lots of it. Even if you never take the top off the sugar bowl, processed foods alone are enough to send your blood sugar soaring. Even seemingly innocuous items like bottled spaghetti sauce, instant oatmeal, frozen entrees, and yogurt are loaded with processed sugar and high-fructose corn syrup.

There are lots of reasons to avoid sugar in all forms. For one, it’s a source of calories with no nutritional value. Plus, it’s rapidly absorbed, causing a greater insulin spike than fiber-rich carbohydrate sources. Now a study sheds new light on the health risks of sugar. It suggests that even moderate amounts of sugar, the amount the average person consumes in a day, may have toxic effects.

Health Risks of Sugar: Another Drawback to Eating Sugar

Even though this was a mouse study, the results are disturbing because what’s toxic to a mouse is also toxic in humans in most cases. Plus, the amount of sugar the mice ate was similar to the amount the average person gets in their diet each day, the equivalent of three sugar-sweetened sodas daily.

The problem with humans is it takes so many years for the ill effects of all that sugar to show up. In mice, it shows up more quickly. On the other hand, there are some flaws in the study. One concern is that mice as a species aren’t accustomed to sugar in their diet and the shock of eating a diet of 25% sugar may have accounted for the higher mortality rate.

This isn’t the first study to question the health risks of sweeteners, especially fructose-based sweeteners like high-fructose corn syrup. The fructose in high-fructose corn syrup and sugar (sugar is equal parts glucose and fructose) is processed differently. It goes directly to the liver where it’s converted to fat. That’s why high levels of fructose have been linked with a common condition called fatty liver. In addition, fructose has unfavorable effects on lipids, especially triglycerides. High triglyceride levels are a risk factor for heart disease and stroke. There’s also some evidence that fructose contributes to insulin resistance, a problem that increases the risk for health problems like type 2 diabetes and heart disease. Rats that eat a diet rich in fructose develop insulin resistance.

Health Risks of Sugar : Other Reasons Why Sugar is Bad for You

Is sugar addictive? Some research shows that it activates pleasure centers in the brain and stimulates the release of the mood enhancing neurotransmitter dopamine. In a rat study, eating sugar increased the number of dopamine receptors in the brain. When dopamine was blocked, the rats experienced signs of sugar withdrawal. The rats also developed signs of sugar dependence. It’s not clear whether this is true in humans, although some humans freely admit to being “addicted to sugar.”

There’s another simple reason why dietary sugar is not so good for you. Foods that contain sugar and high fructose corn syrup are heavily processed, and sugar itself is devoid of nutritional value. If you’re eating foods high in sugar, you’re missing out on healthier fare that’s higher in natural vitamins, minerals, and antioxidants. It’s not a good trade-off.

Certainly, you won’t die acutely from eating sugar. It’s not a “toxin” in the classic sense of the word, but problems from eating sugar may not show up for years down the road. Just as cigarette smoking doesn’t lead to cancer and heart attacks right away, a high sugar diet takes years to take its toll on your body. Meanwhile, it’s causing “silent” metabolic issues.

It may not be possible to give up sugar entirely. After all, the average American consumes about 165 pounds of sugar a year. Chances are you can do MUCH better than that. Cut back on processed foods, especially those with added sugar. Give up soft drinks, and choose more whole foods to put on the dinner table. Read labels before buying bottled condiments. You may be surprised at how much sugar is in them. Most importantly, be aware of the health risks of sugar and the amount of sugar in your diet.

Medical News Today. “The Hidden Ingredient That Can Sabotage Your Diet”

6 Great Things That Happen When You Cut Back on Sugar

What Is the Big Deal About High Fructose Corn Syrup?

Nutrition Bars: Are They Really Nutritious?

3 thoughts on “Health Risks of Sugar: Is It More Toxic Than You Think?”