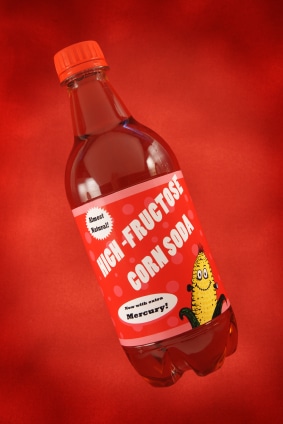 High fructose corn syrup, or HFCS, is the most common sweetener found in processed foods and beverages today. Developed in Japan in the 1970s, HFCS soon became popular with American food manufacturers because it is cheap, has a long shelf life, and is as sweet as table sugar. It is found in many types of food including soft drinks, salad dressings, jams, ketchup, soups, and baked goods. It is estimated that the average American consumes over 40 pounds of corn syrup each year, so it behooves us to consider what exactly is in this corn syrup, and what effect it has on our bodies.

Along with its increasing prevalence, HFCS has come under increasing scrutiny. Researchers are testing it, and consumers are wondering about it. So what have they found? It has been suggested that HFCS suppresses the immune system, leads to weight gain, and increases a person’s risk of contracting diseases such as diabetes, cancer, and cardiovascular disease. All sugar has been accused of being detrimental to our health, so what makes HFCS a bigger villain? It is in the way that this particular sugar is processed by the body. Table sugar is composed of half fructose and half glucose. In high fructose corn syrup, there is more fructose than glucose. This is significant because glucose is easily metabolized by any cell in our bodies, but the liver is the only place where fructose can be metabolized. When the liver must process high quantities of fructose, it becomes overwhelmed, resulting in increased triglycerides, increased insulin resistance, and increased blood pressure – all of which increase our risk of cardiovascular disease, diabetes, and obesity.

Researchers at Princeton University decided to see for themselves if HFCS is worse than sugar, so they fed rats in one group table sugar, and rats in another group HFCS. Even when rats in the two groups consumed the same number of calories, the rats in the HFCS group gained significantly more weight. Princeton graduate student Miriam Bocarsly said: “These rats are not just getting fat; they are demonstrating characteristics of obesity, including substantial increases in abdominal fat and circulating triglycerides. In humans, these same characteristics are known risk factors for high blood pressure, coronary artery disease, cancer, and diabetes.”

As if the weight gain and increased risk of disease are not enough cause for concern, there is another reason that HFCS is dangerous: it contains mercury, a known neurotoxin. Given that HFCS is often an ingredient in products marketed to children, such as bread, cereals, yogurt, and condiments, this is particularly disturbing. According to an article in the Washington Post in January of 2009, two separate studies found significant amounts of mercury in foods with HFCS found on supermarket shelves. The article states “In the first study, published in the current issue of Environmental Health, researchers found detectable levels of mercury in nine of 20 samples of commercial HFCS. In the second study, the Institute for Agriculture and Trade Policy, a non-profit watchdog group, found that nearly one in three of 55 brand name foods contained mercury. The chemical was found most commonly in HFCS-containing dairy products, dressings, and condiments.”

Another problem with high fructose corn syrup is that it suppresses the bodies feeling of fullness, which causes people to eat more and gain weight. This is because, unlike most sugars, when you eat HFCS, your body does not release leptin, which triggers a feeling of satiety. Without that feeling of satiety, you are left wanting to eat more, which leads to increased sales for food manufacturers and increased weight for you.

Although sugar, in general, is unhealthy, it does appear that high fructose corn syrup is more damaging to the body than table sugar. In order to avoid it, one should avoid soda and heavily processed foods, and read labels carefully. Be especially vigilant when purchasing ketchup and bread, as these are two of the most common places that you will find high fructose corn syrup. By consuming a diet rich in natural foods, such as nuts, beans, fruits, and vegetables, not only will you be avoiding unnecessary weight gain, but you will be slashing your risk of many devastating diseases as well.

3 thoughts on “What Is the Big Deal About High Fructose Corn Syrup?”