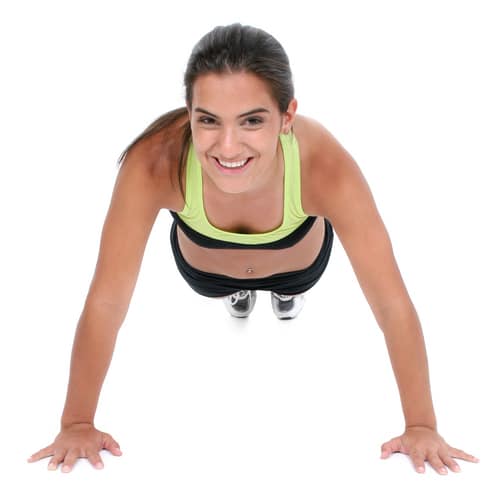 Push-ups are one of the most recognizable exercises. Look around any gym, and you’re sure to see at least a few people doing some variation of push-ups. They’re used in sports and athletic training and by the military to get new recruits in shape. They’re also combined with other tests to measure a person’s level of fitness.

Push-ups require no equipment and are the perfect bodyweight exercise to do when you don’t have access to a gym. Just drop to the ground and belt them out, using different variations to target specific muscle groups or make it more or less challenging. There’s no doubt that push-ups are an “exercise classic.” Here are some interesting facts about push-ups you may not be aware of.

According to The American College of Sports Medicine, the number of push-ups a female should be able to do is based on age. How do you stack up?

For females, this is based on push-ups done from the knees rather than the toes. If you fall short, don’t feel bad. As the American College of Sports Medicine points out, many people are unable to do even a few. Making push-ups a regular part of your workout program will increase the number you can do.

Can You Beat These Record Holders?

An American woman named Alicia Weber holds a number of push-up world records for females. For good reason. She was able to drop to the ground and do 829 push-ups in 30 minutes and 1020 push-ups in an hour. She also holds the world record for the most performed in 10 minutes – 450 push-ups. That’s a tough record to beat.

In the men’s category, Rolf Heck from Germany executed 2,354 push-ups in 30 minutes, while Bijender Singh from India holds the world’s record for the most done in an hour – 3,877 push-ups. Think you can do push-ups using one finger? Paul Lynch from Great Britain can. He earned the world record for one-finger push-ups by doing 124 without stopping.

Some people think the number of push-ups a person can do is an indicator of their upper body strength. In reality, push-ups are a measure of muscle endurance. A one-minute push-up test is one of the fitness tests used to measure muscle endurance. Some people can bench press substantial amounts of weight but are challenged to do a long sequence of push-ups. That’s because they’ve developed muscle strength through weight-training but not the muscle endurance they need to do a long series of push-ups. Just because you weight train, don’t ignore push-ups. They’re a good way to boost endurance and build fatigue-resistant muscles in the upper body.

Push-Ups Work More Than Just the Chest and Arm Muscles

Push-ups don’t just work the arms and chest – they work multiple muscle groups. Along with the muscles in your arms, chest, and shoulders, you use abdominal and upper back muscles when you do a set of push-ups. The fact that you’re working so many muscle groups means you’re burning more calories than when you do an isolation exercise like biceps curls. With push-ups, you get more fitness bang for your buck.

You may not be able to do 829 push-ups in 30 minutes, but that doesn’t mean you won’t get benefits from adding push-ups to your exercise routine. Push-ups boost muscle endurance and work multiple muscle groups simultaneously

5 Time Expedient Exercises That Will Power Up Your Fitness Routine

Push-Up Benefits: Getting the Most Out of Push-Ups

Push-Up Power: Discover the Benefits of Push-Ups and How to Maximize Them