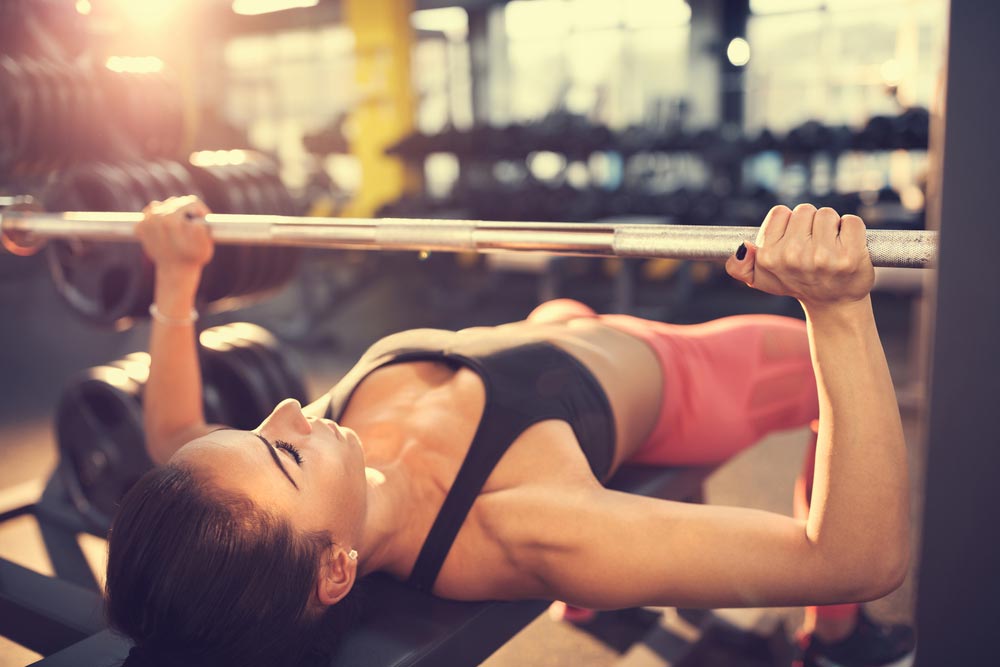 Guys focus a lot on chest exercises because they want pectoral muscles that pop, but women should do them too. For one, you don’t want to skip working any part of your anatomy as doing so means your workout isn’t balanced and muscle imbalances can lead to injury.

The Muscles That Shape Your Chest

What are the muscles you’re working when you target your chest? The largest muscle in your chest is called the pectoralis major. It originates from your sternum, clavicle (collarbone), and ribs and connects to the upper part of your humerus, a bone in your upper arm. When you see guys with well-developed pecs, it’s prominent pectoral major muscles that you’re seeing.  The pectoralis minor lies beneath the pectoralis major and extends from the scapula to the 3rd, 4th, and 5th rib.

Which Chest Exercises Are Most Effective?

The American Council on Exercise conducted a study in hopes of answering this question. They asked participants to do a series of nine common chest exercises while they measured activation of the pectoralis major using EMG. Using EMG (electromyography), researchers measure the muscle firing rate and recruitment of motor units.

Which exercise targeted the pectoral major muscle the best? Barbell bench presses were the “rock star” chest exercise of the nine they tested, although the pec deck machine and bent-forward cable crossovers came in a close second and third. The exercise that came in dead last was the standard push-up, a bit surprising since the push-up is considered to predominantly be a chest exercise. Suspended and stability ball push-ups were slightly better at activating the pecs.

Based on EMG data, the exercises from best to worst for activating the pecs was:

So, if you have limited time for chest training, based on muscle activation, you’ll theoretically get the greatest results for your training time by doing bench press, the pec deck machine, and doing bent-forward cable crossovers. But, it’s also a good idea to work your pecs in a variety of ways, rather than just sticking with the top three. If you do the same exercises repeatedly over many weeks, your pecs will adapt to the stimulus you place on them. So, vary the chest exercises you do, but make sure you’re including exercises like bench press that strongly activate the pec muscles.

When you do bench press, make sure you’re doing them correctly. One of the biggest mistakes people make with this exercise, especially when using a barbell, is bouncing the barbell off their chest at the bottom. When you do this, you’re reducing the benefits of the exercise by using momentum. Do the exercise in a slow, controlled manner, even if you have to lighten the weight. Also, keep your feet flat on the floor and don’t raise your hips off the bench when you press.

Also, don’t disregard the exercise that came in last, push-ups. Push-ups work too many muscle groups to not include in your routine. However, standard push-ups shouldn’t be the main exercise you do to work your chest. Try decline push-ups, suspended push-ups, or push-ups on an unstable surface, like a stability ball to work your pec muscles a bit more.

How Often Should You Work Your Chest?

Two to three times per week is optimal for working your chest. If you lift heavy, two times a week is sufficient since your muscles need more rest between workouts when you’re training them hard – and use a weight that’s at least 60% of your one-rep max if you want to see change. Otherwise, you’re mainly building muscle endurance. Aim for 8 to 12 reps of each chest exercise you do and do 3 sets total. As mentioned, vary the chest exercise you do so your muscles don’t adapt to the same repetitive movements.

Now, you know why it’s important to work your chest and how best to do it. You may have noticed that most of the exercises in the study that work the chest are “pushing” exercises, but don’t forget to include upper body “pulling” exercises as well for balance. Most importantly, make sure you’re working those chest muscles to keep them strong!

Are There Added Benefits to Weight Training on a Swiss Ball or Stability Ball?

5 Advanced Strength-Training Techniques to Help You Push Past Failure