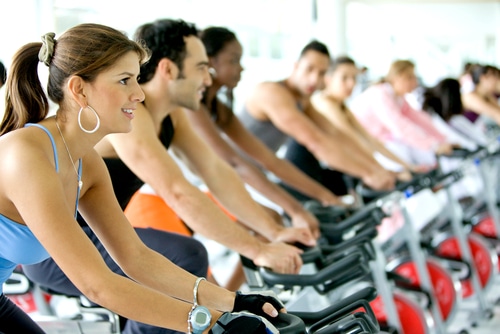 Exercise doesn’t seem to be on most American’s priority list. If you ask most people, they’ll tell you they WANT to get into shape, but most aren’t taking steps to get there. According to a recent report released by the Centers for Disease Control and Prevention, only 20% of Americans meet the current recommended guidelines for aerobic and strength-training exercise. The message that exercise can improve your health and quality of life is still falling on deaf ears for many.

What are the most popular exercise trends? Aerobic exercise is the form of exercise most Americans do on a regular basis with almost 47% of adults getting the recommended amount of aerobic activity – about 2.5 hours of moderate-intensity aerobic exercise or 1.25 hours of high-intensity exercise weekly. In contrast, only 24% strength-train or do resistance exercises. Despite copious amounts of research showing the health benefits of exercise, people who do it regularly are still in the minority.

Who works out the most? Based on a Gallup poll released in 2010, people who live in the western part of the United States are most likely to get the amount of exercise experts recommend for good health. California, Oregon and Washington lead the way when it comes to staying in shape.

There are gender differences too. Men outnumber women when it comes to working up a sweat. Almost 30% of men meet their exercise requirements while only 25% of women do. Surprisingly, almost 30% of adults over the age of 65 are physically active compared to only 25% of adults between the age of 30 and 44, based on one survey. There’s also been a greater increase in seniors exercising than younger people under the age of 25. Seems that seniors are getting the message that they need to stay active to be fully functional and enjoy a better quality of life as they age.

Other research shows exercise habits correlate with educational levels. Almost twice as many people with graduate degrees are physically active compared to those who didn’t graduate from high school. Being married and living in the suburbs was correlated with higher levels of physical activity in one study, although other research shows married people spend less time exercising that those who are single or divorced. Makes sense since you’re going to be more concerned about looking and being fit when you’re in the market for a mate.

Exercise Trends: What’s the Most Popular Form of Exercise?

As you might have guessed, walking is the most popular form of exercise based on information from the United States Bureau of Labor and Statistics. Among men and women who exercise, most work out between 30 and 59 minutes a day. When are they doing it? Seems the most popular time to exercise is the late afternoon or evening on days when people work a job and in the morning on days they don’t work.

Not only are the majority of people not meeting exercise recommendations, but they’re also moving around less at work and around the house. With so much technology available, there’s less need to move around during the day. That’s spawned a new problem – “sitting disease.”

Sitting for hours at a time causes your body to go into “metabolic hibernation,” leading to insulin resistance and weight gain. Experts now say that sitting too much is an independent risk factor for heart disease and increased mortality, regardless of how much leisure-time physical activity you do and how many times a week you spend doing a structured workout. So couch potatoes who work a sedentary job are getting doubly hit. Sitting disease is becoming a world-wide problem as more people adopt technology and fewer people walk or bike to work – and this trend shows no sign of reversing.

Despite the health benefits of exercise, most people still aren’t getting them. If you work out regularly, you’re reaping health benefits that other people aren’t – but don’t use that as an excuse to sit around during the day. Doing a formal workout isn’t the same as staying active. Get up and move more even when you aren’t doing a workout. Don’t let your body go into metabolic hibernation.

Medical News Today. “Only 20% of U.S. Adults Get Enough Exercise”

United States Bureau of Labor and Statistics. “Sports and Exercise”

What We Can Learn about Longevity from the Blue Zones