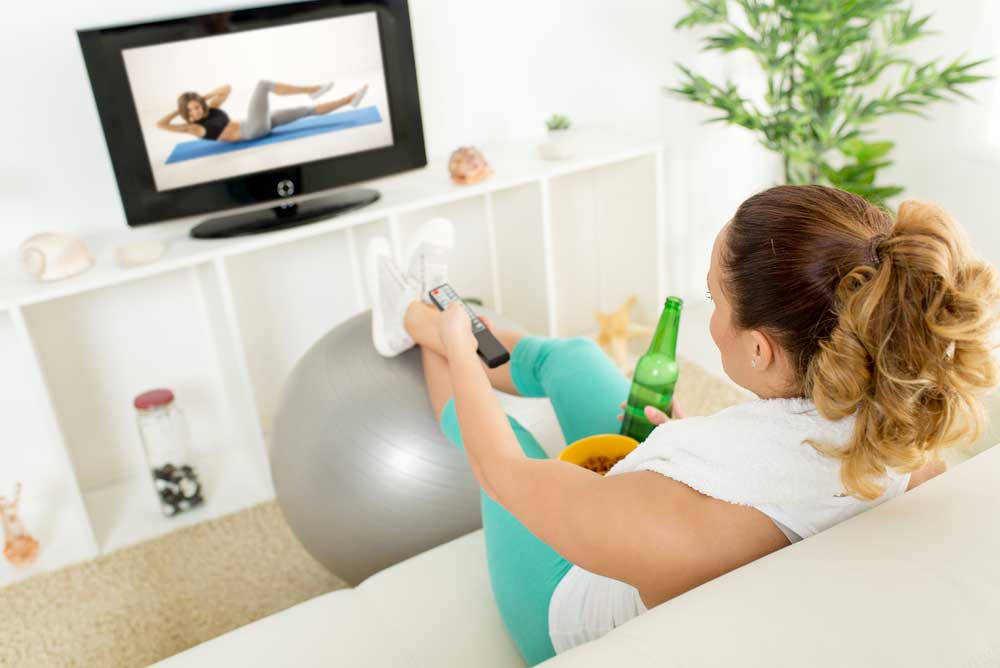 Ideally, we’d all be normal body weight and physically active for at least 30 minutes per day most days of the week as guidelines recommend. Studies suggest that people who meet these criteria can add years to their life as well as lower their risk of chronic disease, including type 2 diabetes, cardiovascular disease, and some types of cancer. Unfortunately, as a nation, we’re far from meeting those goals. According to statistics by the Centers for Disease Control and Prevention for 2014, 37.9% of adults over the age of 20 are overweight or suffer from the health problems of obesity. That’s a significant portion of the population and one that’s growing in number.

With so much emphasis on maintaining healthy body weight and staying active, you might wonder, which is ultimately more damaging to health, being obese or being too sedentary. According to data presented at the annual meeting of the American Orthopaedic Society for Sports Medicine, staying physically active can cut the death rate of normal-weight individuals by 50% relative to those who are inactive. That’s a significant reduction!

To back this up, they cite a study conducted by the Cooper Institute. This study looked at the death rates of 2,000 men, some of whom were obese and had diabetes. Despite their health conditions, some of the guys were physically active and the ones who were had a death rate a third lower than those who maintained a normal body mass index and did little exercise. This study also found that BMI was not correlated with the risk of dying but the level of physical fitness was. In fact, there were significant differences in mortality based on how physically fit participants were. For example, the risk of dying prematurely was 4.5 times greater in those who were least physically fit compared to those who had attained high levels of fitness.

The Synergy of Being Sedentary and Obese

We talk a lot about the obesity epidemic, but we shouldn’t ignore the fact that we also have a problem with people not moving enough. The combination of the two is synergistic. Being obese and having a low physical fitness level raises mortality risk even more. No doubt, it’s difficult for some people to lose weight and not everyone can successfully get down to ideal body weight. But, one thing the majority of people can do some form of daily exercise.

But, are we doing it? Here’s a sobering statistic by the Los Angeles Times: 30% of people in the United States over the age of 6 years live a sedentary lifestyle to the extent that they get no physical activity on a regular basis – but why are people so unwilling to exercise?

New research in mice may shed some light. It shows that obesity itself may dampen the motivation to exercise. No doubt, it’s harder to motivate yourself to exercise when you have more body weight to carry around, but this study suggests the lack of motivation may stem from differences in brain activity between obese and non-obese subjects, at least in mice.

In the study, researchers found that obese mice showed changes in dopamine signaling in the brain that made them less inclined to move. In fact, obesity alters the activity of receptors that respond to the brain chemical dopamine, a chemical that impacts appetite, mood, and our tendency to get up and move our body. Some researchers argue that obesity may not come from lack of physical activity, but the reluctance to exercise may stem from changes in dopamine signaling related to obesity itself.

Now, back to the fit versus fat debate. Exercise may not overcome all of the risks that go along with being obese but it helps. In one study involving more than 14,000 middle-aged men, many of whom were overweight or obese, researchers monitored their fitness level and tracked the guys for 6 years. What they found were men who let their fitness level decline had a higher risk of death independent of their BMI. That should show the importance of exercise! On the other hand, those who maintained or improved their fitness enjoyed a lower risk of dying. All in all, it appears that fitness trumps fatness for lowering mortality risk.

In addition, research suggests that physical activity lowers mortality independently of its impact on obesity. In other words, even if you exercise and don’t lose a pound, your risk of dying is lower because you’re exercising and improving your fitness level. That’s good news because exercise is something we have control over and that’s not always true of the number we see on the scale. In fact, it’s not a good idea to be too obsessed with what the scale says.

Avoiding obesity and staying physically active are BOTH important for health and longevity. But, being physically active and physically fit gives you an edge even if you can’t get down to your ideal body weight. However, a well-rounded exercise program that includes strength training and aerobics can help you improve your body composition as well. Strength training can increase the amount of muscle you have and give you a slight metabolic advantage. Exercise is important regardless of your body weight. So, keep moving your body!

Fit and Fat: Does Being Fit Compensate for the Health Risks of Being Fat?

The Connection Between Fitness and Longevity: The Science of Staying Young

Is Staying Lean Harder Than It Was 30 Years Ago?