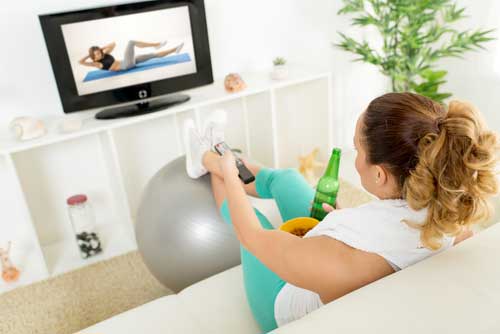 Ask the average person why they don’t work out and they’ll tell you they’re strapped for time. While time is an issue, many girls and guys who claim they lack time in the evening still manage to watch an hour or two of television. The reality: Even time challenged people can manage 10 or 20 minutes of exercise first thing in the morning or a short workout as a replacement for TV time. Still, many people don’t. Is time really the issue?

How many people DO make time for a workout? The Centers for Disease Control and Prevention, after surveying 45,000 adults, found 80% of Americans don’t get the amount of exercise the government recommends for good health – at least 2.5 hours of moderate-intensity exercise or 75 minutes of vigorous exercise each week. Of course, adults also need to resistance train to preserve strength, lean body tissue, and bone density. Most people don’t do that either and pay for it by becoming sarcopenic as they grow older. Resistance training is just as important, if not more important, than aerobic exercise.

According to Psychology Today, lack of time isn’t the real reason most people don’t exercise. More likely it’s the fact that exercise is uncomfortable, and most people try to avoid activities that drag them out of their comfort zone, especially exercises that cause muscles to burn and sweat to flow. If they have a choice between doing a HIIT routine and curling up on the couch to relax in the evening, guess what most people choose?

As you might have guessed, there are more couch sitters than people comfortable with lifting a barbell Most people will go to great efforts to avoid feeling pain or discomfort, even if it means not being in good shape or gaining the health and longevity benefits of exercise. Such an approach may be shortsighted. According to a study published in Medicine and Science in Sports and Exercise, exercise can actually increase an individual’s pain tolerance and discomfort.

In a study, researchers tested the pain threshold 24 healthy adults who didn’t exercise by tightening a blood pressure cuff on their arm. Once a baseline pain tolerance threshold was measured, half of the participants began exercising 30 minutes a day by cycling on a stationary bicycle three times weekly for 6 weeks while the rest continued to be couch potatoes.

As expected, the participants who worked out became fitter and their aerobic capacity increased. When researchers measured their pain tolerance again, those who had exercised for 6 weeks had a higher tolerance to pain while the control group who didn’t exercise showed any improvements in how they reacted to pain and how much they could tolerate. Six weeks of aerobic exercise training was enough to change the participants’ perception of pain – another health benefit of a kick-butt workout.

Exactly why and how exercise increases pain tolerance isn’t clear. Research shows exercise stimulates the release of natural chemicals called endorphins that blunt the perception of pain but in most cases the effects of endorphins are short lived. How can you explain the fact that exercise “toughens you up” long term?

Its possible exercise alters the release of other brain chemicals like serotonin that affects pain perception on a longer-term basis. People who participate in sports, in general, are better able to deal with pain than an inactive person. Injured athletes often continue to play even when injured and aching. Of course, athletics probably selects for people who are more pain tolerant, guys and gals that don’t mind a little discomfort to win a game or improve their performance. Still, there’s something to the idea that exercise makes discomfort more tolerable.

Perception of pain is often affected by the meaning behind the pain. For example, research shows women routinely downplay the pain of childbirth, after the fact because the delivery of a child is a positive experience. If people reluctant to exercise can visualize in their minds the benefits they’ll get from working out – better body composition, as well as the many health benefits, exercise offers, they, too, may be less deterred by a little short term discomfort.

Another possibility is that exercise, especially competitive sports, enhances mental toughness, making pain more tolerable. How an individual handles pain partially depends upon input from higher parts of the brain where attitudes and how we think about pain are formed. Stress can also change tolerance to pain while activities like meditation may enhance the ability to tolerate discomfort. One study carried out at the University of North Carolina at Charlotte showed even brief training in meditation effectively increased pain tolerance.

Of course, you have to get non-exercisers up off the couch and into exercise shoes to help them develop greater pain tolerance and enjoy the other health benefits of exercise. That’s not always an easy task. You have to show people who are reluctant to exercise that the short-term discomfort of working out leads to health benefits later, including increased energy levels, better exercise tolerance, improvements in mood and sleep, better cognitive function, and a reduced risk for some health problems. What differentiates people who exercise from those who don’t is the ability to delay gratification. A little sweat now adds up to more energy and better health later.

Is the Desire to Exercise Hardwired into Our Genes?

Some animal research suggests enjoyment and appreciation of exercise has a genetic component. When researchers compared the brains of rats that loved to run on an exercise wheel with those that didn’t, they found major gene differences in portions of the brain involved in feelings of reward. Researchers have even found genetic similarities among people who find pleasure in exercising. These genes regulate functions like energy regulation during exercise and how physically and mentally easy exercise feels.

Of course, each of us is a little different. A workout that feels easy and mentally relaxing for one person may seem difficult and monotonous to another. It would be all too easy to blame lack of motivation to exercise on genes, but there’s a form of exercise that can work for everyone. The key is to do something you enjoy and switch it up occasionally to add variety. The ability to delay gratification is important too. Not every workout you do will be enjoyable, so keep the big picture in mind. Suffer a little now to feel better and look better later. It’s a worthwhile trade-off.

Centers for Disease Control and Prevention.

New York Times Well. “Why We’re Motivated to Exercise. Or Not.”

Is Your Brain Sabotaging Your Workouts?

NSAID and Athletes: Why You Shouldn’t Take Them Too Often