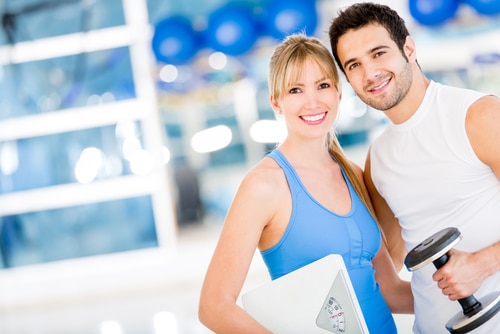 Women have a higher percentage of body fat than men. Plus, women typically have a harder time shedding body fat relative to men. This makes sense from a physiological standpoint since women need greater fat reserves for reproductive purposes. That there are these differences should come as no surprise. They may explain why women have to work harder to lose body fat than men and store fat differently.

Differences in the Way Men and Women Store Fat

Ever notice how men complain about tummy and waistline fat while women have a harder time slimming down their thighs and buttock? Prior to menopause, women have a tendency to store fat in their lower body. One theory is the extra fat supplies cushioning for a baby’s head during delivery. After menopause as hormone levels drop, fat distribution changes and women have a tendency to store fat around their tummy and waistline. This is more consistent with a male pattern of fat distribution. Unfortunately, this pattern of fat distribution, also known as android or apple-shaped, is linked with a greater risk for health problems like heart disease. It’s around this time that women experience an increased risk of heart disease.

How do men and women compare in terms of body fat ratios? Women have, on average, 6 to 11% more body fat than men. The difference in body fat levels may be partially explained by higher estrogen levels in women. Research shows estradiol, the most abundant form of estrogen in women, suppresses fat oxidation, the process by which cells break down fat into energy. Therefore estrogen may make it more difficult for women to shed body fat. This makes sense since estrogen levels are higher during a woman’s reproductive years when they need to have more stored body fat.

Fat Metabolism in Women versus Men

At rest, men have a higher resting metabolism than women even after adjusting for differences in lean body mass. This doesn’t seem to be influenced by fitness level or body composition. This difference helps to explain why women store body fat more easily than men. Interestingly, women can tap into fat as an energy source during exercise more readily than men.

Why are women more efficient at using fat for fuel during exercise? One theory is estrogen opens up blood vessels during physical activity and increases blood flow to adipose tissue. This delivers more adrenaline to stored fat. Adrenaline interacting with receptors on adipose tissue mobilizes fatty acids and delivers them to muscles to use as fuel during exercise. Women are able to readily break down fat stores and use fatty acids for fuel. This spares muscle glycogen giving them resistance to fatigue during long periods of low to moderate-intensity endurance exercise.

Since women are able to more easily metabolize fat as fuel during exercise they must be more efficient at storing it during periods of rest to explain the greater difficulty they have losing body fat relative to men. There is evidence that this is so.

Men and women differ in how readily they store fat and where they store it. Even though women oxidize more fat as fuel during exercise, their resting metabolic rate is slower than a man’s, irrespective of body composition. In addition, men and women store fat differently with men storing more fat in an “android” distribution, around the waist and tummy.

After menopause, women develop a similar pattern of fat distribution to men and become more apple-shaped as fat distribution switches from hip, thighs, and buttocks to the upper body. Of course, this may be altered to some degree by hormone replacement therapy, exercise, and diet. Research shows that women can avoid some of these fat storage pitfalls through high-intensity exercise, resistance training and limiting processed carbs.

Science Daily. “Why Do Women Store Fat Differently From Men?”

Truth or Myth: Women Have a Harder Time Losing Weight Than Men