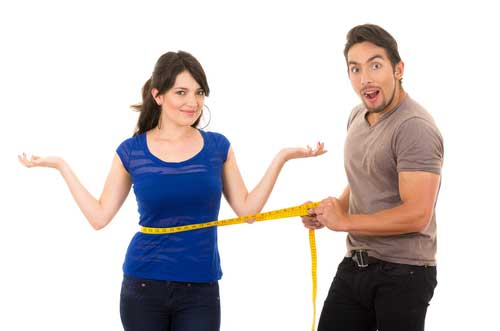 There’s a common perception that men have an easier time losing weight and lose weight more quickly than women, but is this really true and if so why?

Sadly, men really do have an advantage when they try to lose weight, but the advantage may only be short-term. At least in the beginning, men tend to lose weight faster and, seemingly, with less effort than women. It’s not surprising that men are speed demons when it comes to weight loss. After all, the average male is larger in size than the average female and has a higher percentage of lean body mass. Having a larger body surface area and more muscle mass means your body has to burn more calories to sustain it. Not only do men burn more calories at rest, because of more metabolically active muscle tissue, but they also burn more calories when they move around and exercise. Men also have a higher resting metabolic rate, between 3 and 10% higher compared to women, independent of lean body mass.

That’s the metabolic part of the equation, but there’s also evidence that women react to food differently than men, possibly putting the female species at a disadvantage in terms of calorie intake. A study published in the American Journal of Clinical Nutrition showed women are more likely to be emotional eaters than men. When stress rears its ugly head, biting into something carby releases serotonin, which has a temporary mood-elevating effect. Plus, our brains have fond memories of comfort foods, and these memories get reactivated when stress becomes overwhelming.

Women may also respond differently from a dietary standpoint to exercise. Research shows women experience a surge in the appetite-stimulating hormone ghrelin after a workout, but men don’t. Leptin levels also drop more in women than men after an exercise session, leading to a greater desire to munch out after a workout.

Although it might seem that women have everything stacked against them in terms of losing body fat, one study showed men’s unfair advantage becomes less advantageous over time. Researchers from the United Kingdom followed the weight loss journeys of almost 278 overweight and obese men and women. During the first two months, male participants lost two to three times as much weight as the women, but the women played “catch up” as the study progressed. By 6 months into the study, weight loss between the two sexes was equal, on average. So, women appear to lose weight at a slower pace, on average, but with persistence, females can experience similar weight loss success as men.

The equalizer that many women don’t take advantage of is resistance training and the change in body composition it brings about. By building lean body mass, you’ll burn more calories at rest AND when you carry out your daily activities. Certain factors that affect your metabolism and how rapidly you lose fat you can’t control, specifically, age and genetics. What you do have some control over is how much muscle mass you carry on your frame. Resistance training is the key to developing more metabolically active muscle tissue that will help you burn more calories even at rest. Focusing mostly on cardio is short-sighted. You may burn more calories while you’re doing it, but you won’t enjoy the long-term metabolic investment that having more muscle tissue provides. Carrying more muscle also enhances insulin sensitivity, which is important for long-term weight control.

Females may have to work harder and wait longer to shed those extra pounds of body fat, but the type of extra body fat each sex carries differs. Women have a greater percentage of body fat, but a higher proportion of that fat is subcutaneous kind, the type that lies directly underneath the skin. Compared to women, men have a higher proportion of visceral fat, the type that lies deep in the pelvic cavity and strongly linked with heart disease and type 2-diabetes. Both guys and gals accumulate more visceral fat with age, but, in general, men have more than women at equal points over the life cycle. So, women have more body fat, but less of the unhealthy kind.

It’s true men have some inherent advantages when it comes to losing weight, most notably, more lean body mass, but women can tilt the odds in their favor. To enjoy some of the same advantages men do, challenge yourself by increasing the intensity of your weight training. Think less about how many calories you’re burning WHILE you’re exercising and more about building enough lean body mass to jumpstart your metabolism, so it’ll work harder for you all the time.

When you weight train, you’ll also benefit by being stronger and experience the joys of being functionally fit, as well as have healthier bones. If you’re looking for a way to beat belly fat, combine resistance training with high-intensity interval training. Just as importantly, make sure you’re getting adequate amounts of protein in your diet and not cutting your calorie intake too low.

As always, the best approach to losing weight, no matter your age or sex, is to focus not on calorie restriction and deprivation but on good nutrition, adequate sleep, stress relief and the right type of exercise. Deep breathing techniques, meditation or yoga are good stress relief tactics for controlling emotional eating.

The take-home message? To lose weight and keep it off takes patience, commitment and a plan that addresses all of the important issues – nutrition, stress, sleep, and exercise – and that’s true no matter your age or sex.

Is Yo-Yo Dieting Damaging to Your Healthy?

One thought on “Truth or Myth: Women Have a Harder Time Losing Weight Than Men”