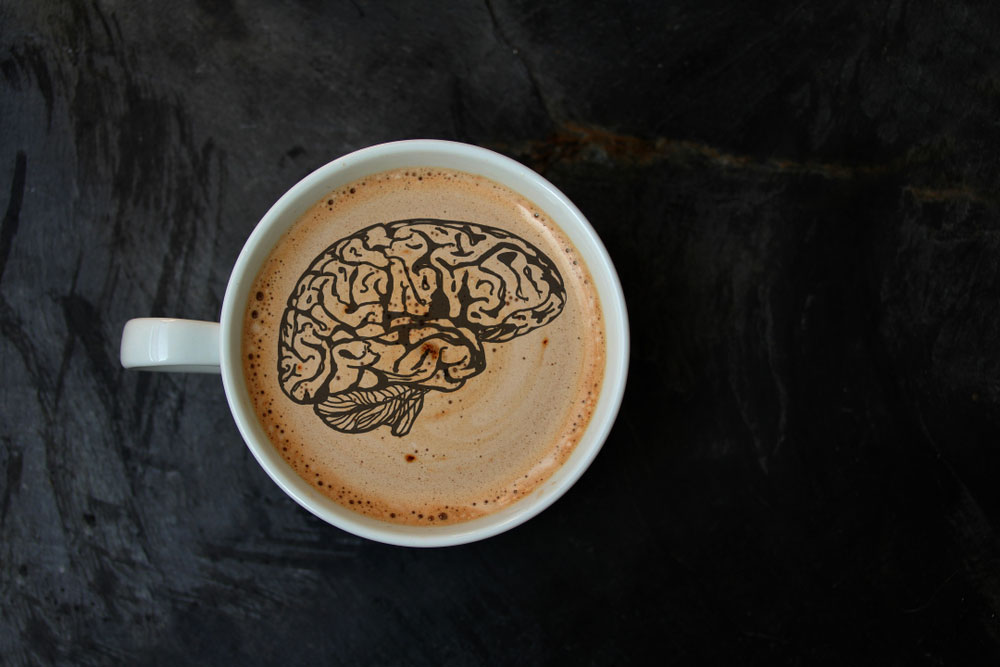 The earliest symptoms of Alzheimer’s disease are mild memory problems, which progress to impairment in daily life and eventually profound dementia. The average survival time after diagnosis is about 8 years, but some people live as long as 20 years after diagnosis.

Some signs and symptoms of Alzheimer’s disease include:

Alzheimer’s has a genetic component, but the odds of developing it are also influenced by lifestyle, including diet. For example, the Mediterranean diet is linked with a lower risk of cognitive decline and dementia. Although no one food can prevent Alzheimer’s disease, there is evidence that drinking coffee may be beneficial for brain health. Let’s look more closely at the effect coffee could have on brain health.

Can a daily trip to Starbucks lower your odds of developing Alzheimer’s disease? A study found that subjects who consumed more coffee had lower odds of developing mild cognitive impairment (MCI) over the duration of the study. This only shows an association. There may be other factors common among coffee drinkers that explains this benefit.

How Brains Age and the Effects of Coffee

With age, our brains shrink and become less active as they try to compensate for this decline by using fewer resources while still performing normal functions like remembering names or places you’ve been before (known as working memory). When these compensatory mechanisms fail, memory problems develop.

Mild cognitive impairment (MCI) is a condition in which people have more problems remembering things than normal for their age and education level. People with MCI are more forgetful and have problems with cognitive tasks, but don’t meet the criteria for Alzheimer’s disease. However, people with MCI are at higher risk of developing Alzheimer’s in the future. Sometimes, MCI can be a sign that Alzheimer’s disease is on the horizon, but not always. In many cases, MCI doesn’t progress.

People who are regular coffee drinkers experience improvements in some aspects of cognitive function. Plus, research shows that consuming significant quantities of coffee may reduce the build-up of damaged proteins called amyloid in the brain. Amyloid build-up is common in people with Alzheimer’s disease and seems to contribute to their cognitive issues by disrupting communication between brain cells. Amyloid is like “gunk” that clogs up the brain so that information doesn’t travel as quickly.

How strongly does science support the brain health benefits of coffee? Three out of five studies link coffee drinking with a reduction in brain dementia. Some also show that tea drinking has similar benefits.

How Much Coffee Do You Need to Drink?

The study didn’t determine how precisely much coffee you need to drink to get the cognitive benefits, but the researchers recommend consuming at least 2 cups daily if you don’t have other health issues that caffeine can aggravate. It’s also unclear whether decaf coffee has the same benefits as a caffeinated brew.

Coffee contains hundreds of bioactive compounds, beyond caffeine, which may explain the benefits. One of the most compelling is chlorogenic acid, an antioxidant that helps protect against oxidative stress, a phenomenon that can also damage brain cells. Caffeine improves alertness and memory, while polyphenols may reduce inflammation, which is healthy for the brain.

Make Your Coffee Even Healthier

If you drink coffee for health reasons, avoid adding sugar since it may reduce some of the health benefits you get from that hot cup of java. To boost the flavor of coffee and add a touch of sweetness, a pinch of cinnamon or cacao powder is a heart-healthy, blood-sugar-friendly way to enhance the flavor of your coffee.

Some studies also suggest that casein in dairy milk binds to some of the beneficial compounds in coffee and reduces their availability. To ensure you get the full benefits, drink coffee black or add non-dairy milk, like coconut, oat, or almond milk, to your cup.

Filtered Coffee is Your Best Bet

Most studies use filtered coffee since filtering partially removes cholesterol-raising compounds. Coffee beans contain two diterpenes that may raise cholesterol levels. These are kahweol and cafestol, which is in unfiltered coffee preparation methods such as boiled, French press, and espresso. Filtered coffee, such as drip coffee, contains 30% less of these compounds, as filtering helps remove them.

Whether drinking coffee lowers the risk of Alzheimer’s disease is an area that needs more research. Still, it’s encouraging that it reduces markers of cognitive decline. While there seems to be some benefit to drinking moderate amounts of coffee on your brain health, it’s not yet clear how much is enough or too much to get the benefits, but if you enjoy coffee, keep drinking it! You may be doing something beneficial for brain health.

Is Resistance Training Good for Your Brain?