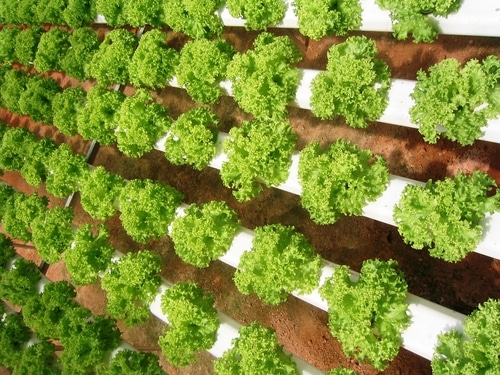 When you go to the supermarket to buy fresh vegetables, you might think that conventional and organically-grown veggies are your only option. Look a little closer and you might see some vegetables labeled as “hydroponically-grown vegetables” and wonder whether they’re a good alternative. After all, organic vegetables can be expensive. The answer to this question isn’t so straightforward. Here’s why.

What Are Hydroponically-Grown Vegetables?

Hydroponic vegetables are grown without soil. They’re raised in a soilless environment using other media like gravel, sand or even wood shavings to anchor the roots. Once the roots are anchored, the plants are placed into water enriched with the nutrients they need to grow. The growing plants get what they need from minerals and other nutrients added to the water.

Hydroponically-grown vegetables are not organic unless they bear the USDA label that indicates they’re certified organic. To be classified as organic they’d have to grow up in an organic nutrient mixture. On the other hand, they’re less likely to be tainted with pesticide residues than conventionally-grown produce because pesticides aren’t usually needed in a controlled setting where “pests” aren’t a problem.

Some sources say that hydroponically-grown vegetables are more nutritious than veggies that grow in soil. One 1994 study showed that tomatoes and peppers grown hydroponically were more vitamin and mineral-rich, but this isn’t an issue that’s been closely looked at. It’s possible that hydroponic vegetables could have some advantage from a nutritional standpoint since growers can control the nutrient and mineral solution they’re grown in. By increasing the number of nutrients in the water, the developing plant could take up more nutrients and minerals. The downside is there could also be inadequate nutrients and minerals in the water, decreasing the nutrient content of the vegetable. This creates a lot of variabilities.

Some people believe the taste of hydroponically-grown vegetables isn’t as good as conventionally-raised ones, although this varies depending upon the grower and the type of vegetable. According to an article in the New York Times, better-tasting hydroponic produce grown by small growers is beginning to enter the market, although there are also a few large, commercial hydroponic operations that aren’t small. Hydroponic produce is often fresher than conventional and organic produce since it usually reaches the market shortly after it’s harvested. That means it has less time to set around on shelves and lose nutrients and antioxidants.

Should You Buy Hydroponic Produce?

Certified organic produce is still the best option since it’s certified as having been grown without pesticides. Theoretically, growers of hydroponic produce could use pesticides, but there really isn’t as much of a need to do so. If you have a choice between conventionally-grown vegetables and hydroponic ones, go with the hydroponics. They’ll likely have been grown without pesticides and are unlikely to be contaminated with bacteria as can happen when crops are grown in open fields. However, you choose to do it, keep putting veggies on your plate.