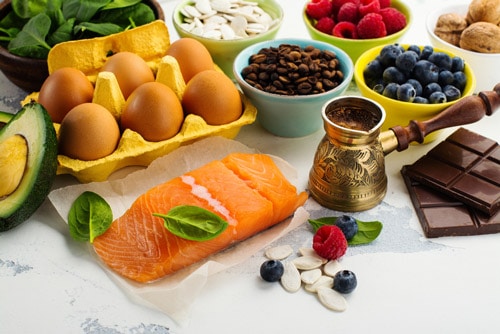 In the quest for a firm, toned body, let’s not forget about the importance of brain health. Just as your physical health matters, so does your mental health and the well-being of your noggin. The good news about the gray matter that makes up your brain is that it has “plasticity,” meaning it can change and reorganize itself even during adulthood.

How can you preserve brain health? The lifestyle habit that is most conducive to the health of your brain is aerobic exercise. When you do aerobic exercise that increases your heart rate, your body releases hormone-like proteins that promote the growth of new neurons, including one called BDNF (brain-derived neurotrophic factor) What you put into your body matters too. Studies have identified several key nutrients and dietary components that are critical for brain health. Here are some you should know about.

Ever notice how many people are concerned about omega-3s these days? There’s a reason people are adding more omega-3s to their diet. Omega-3s come in two varieties: long-chain omega-3s and short-chain omega-3s. The long-chain is most closely tied to brain health. One long-chain omega-3, called DHA, is a constituent of nerve cell membranes where it makes the membrane more fluid. This, in turn, influences signaling pathways that impact brain function. Some research shows that DHA activates BDNF, the factor that stimulates the growth of new nerve cells or neurons.

Another way omega-3s may help preserve brain health is by their effect on blood vessels in the brain. Studies show that omega-3s have anti-inflammatory properties. That’s important since inflammation inside the walls of blood vessels is linked with the formation of block clots and this can manifest as a stroke. Plus, omega-3s also modestly lower blood pressure and that helps keep your blood vessels and all the organs in your body healthy.

What about your ability to think and remember? In one study, researchers found that adults with the lowest levels of omega-3s in their blood performed less well on a test that measured memory and the ability to think abstractly compared to those in the top percentile of omega-3s. These adults also had a smaller brain volume.

In addition, omega-3s may enhance mental health. Some studies show that omega-3s are beneficial for mental health problems, including depression, anxiety, and even schizophrenia, although more research is needed. Omega-3s are like the “total package” for the brain.

Do you enjoy Thai and Indian food? These cultures use curry powder and turmeric in their food preparation. However, people in other parts of the world as well are discovering the health benefits that turmeric offers. The active ingredient in turmeric, called curcumin, has anti-inflammatory properties and blocks the same enzymes that NSAID like ibuprofen do – without the side effects.

Flavonoids are the chemicals in many plant-based foods that give them their brilliant color. They belong to a larger class of healthy, plant-based compounds called polyphenols. When you hear the phrase “eat the rainbow,” they’re talking about flavonoids.

Berries, green tea, and green, leafy vegetables like kale are some of the best sources of flavonoids. However, the rich purple hue of red cabbage and purple sweet potatoes arises from a group of flavonoids called anthocyanins. Because these chemicals have antioxidant and anti-inflammatory benefits, they protect brain cells, an organ prone to oxidative damage. Plus, some studies show that eating a diet rich in flavonoids may slow the memory loss and the decline in brain function that happens with age.

There’s little evidence that taking high doses of a particular vitamin or mineral will slow brain aging or protect against dementia. However, a deficiency in some vitamins may be harmful to your brain. For example, low vitamin B12, from dietary deficiency or poor absorption, is linked with brain atrophy and can mimic the symptoms of Alzheimer’s disease.

Getting enough vitamin E is also critical since it’s a fat-soluble antioxidant that helps quench free radicals that can damage brain cells. A study published in the Journal of the American Medical Association showed that vitamin E combined with a medication used to treat Alzheimer’s may have benefits for people with mild to moderate Alzheimer’s disease symptoms. Vitamin D bears mentioning too since low vitamin D levels are linked with some diseases that affect the brain, including multiple sclerosis.

The best way to maximize the health of your brain and protect it against damage is to eat a varied diet of mostly whole foods. Sugar and unhealthy fats, like trans-fats, are the enemy of healthy brain tissue. But keep these key nutrients and dietary components in mind when planning your diet.

Live Science. “What Are Flavonoids?”

Harvard Health Publications. “Cocoa: a sweet treat for the brain?

Washington Post. “The Magical Thing Eating Chocolate Does to Your Brain”

Psychology Today. “Is Fish Oil Beneficial for the Brain?”