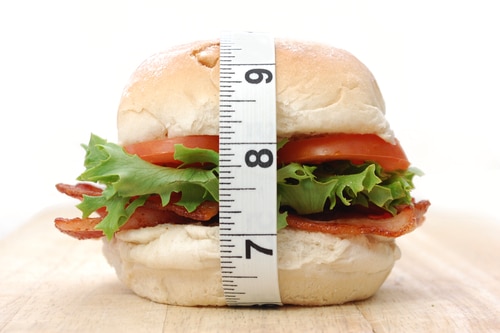 It sounds so easy. Burn off more calories than you take in and you’ll lose weight. It’s not quite as easy as that. There are a number of factors that come into play like genetics, hormones, sleep, exercise habits that are “wild cards” when it comes to losing those unwanted pounds. Plus, it’s not uncommon for people to unknowingly sabotage their efforts to lose weight. This can happen in a number of ways. Here are some ways you may be fooling yourself and making it harder to lose weight.

Some people put on rose-colored glasses when estimating how many calories they eat each day. According to a study published in Practical Diabetology, people underestimate the number of calories they eat and drink at a meal especially if the meal is large. On the other hand, they’re more accurate at estimating the calories in a smaller meal.

There’s also a “health halo” effect that certain foods have. For example, research shows people who buy a product labeled as organic can underestimate the item’s calorie content by as much as 40%. After all, it’s better for them and, therefore, must be lower in calories. One study showed people who ate an organic dessert were more likely to skip their next workout based on the fact they had eaten something “healthy.” Unfortunately, organic desserts usually contain sugar and are just as high in calories.

Then there are those little bites here and there most of us forget to count – samples at the grocery store, a nibble off of someone’s plate, a sample of something cooking. Sure, it’s small, but it all adds up at the end of the day. Don’t forget – beverages count too unless you’re drinking water or unsweetened tea or coffee.

Overestimating How Many Calories You Burn Off

There’s another way you could be fooling yourself. Research shows people overestimate the number of calories they expend during a workout, especially if they use exercise machines. Machines like treadmills and elliptical machines are notoriously inaccurate at telling you how many calories you burned during a workout.

Your body weight also matters. A larger person burns more calories compared to a smaller person when exercising at the same intensity. Plus, you’ll burn fewer calories during your workout as you lose weight and as your body adapts and becomes more efficient at doing it. The real problem arises when you eat more based on the “supposed” number of calories you burned.

How can you avoid fooling yourself? Wear a heart rate monitor to get a better idea of how many calories you’re burning during cardio sessions. You may be burning fewer than you think.

Healthy weight loss takes time. Too many people expect to get quick results. Even if you see a significant drop in weight during the first week of changing your diet, it’s likely water weight, especially if you reduced the number of carbs in your diet. Some people throw in the towel when they don’t see their weight dropping quickly enough, assuming what they’re doing isn’t working. It’s hard to be patient but being consistent with your diet and workouts will deliver results over time.

What can you do to avoid this problem? Have realistic expectations. If you’re losing a pound or two a week, you’re right on schedule. It took time for you to put it on and it will take time to take it off. Think of diet and exercise as being a long-term commitment to good health – not just a “quick fix” for too much body fat.

Don’t let these common weight loss saboteurs keep you from reaching your ideal body weight. Know how many calories you’re taking and how many you’re burning during workouts. Most importantly, be patient. Make a long-term commitment not only to lose weight but become healthier too.

5 Times You Eat More Than You Think You Do