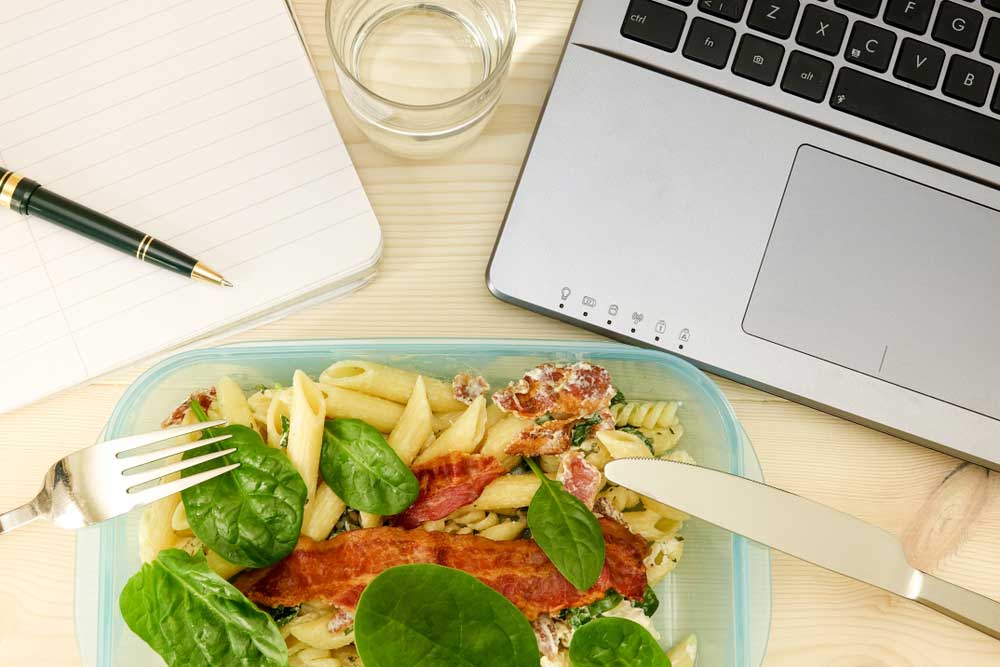 Some of us are better at monitoring how much we eat than others. However, the average person tends to underestimate how much food they eat in a given day. It’s easy to do! It’s even harder to stay accountable when you nibble throughout the day. It’s one thing if you eat three solid meals a day and nothing else, but it’s harder to track if you’re a snacker or a nibbler who grabs a bite every time you go into the kitchen. In fact, there are certain times when you’re more likely to overeat. Once you’re aware of these times, you can take action to ensure you don’t let those bites here and there add inches to your waistline. Research shows these are situations where we tend to eat more than we think:

Sitting in Front of a Computer

Multitasking isn’t a smart idea. Eating lunch in front of the computer might sound like a timesaver but resist the urge. In a study published in the American Journal of Clinical Nutrition, researchers found that people munched on more cookies when they sat in front of their computer than in other settings. That’s not surprising! It’s easy to lose track of how many cookies, brownies, chips, or other snackables you’re nibbling when you’re distracted by the latest news. Before you know it, you’ve eaten half the bag! It’s hard to focus on what’s happening on the computer screen and how much food you’re taking in. That’s the antithesis of mindful eating. So, eat your meals on a table and focus only on what you’re eating, not the latest headlines on Yahoo.

The danger here is that, too often, we adopt a reward mentality after a workout. You’ve just pushed through a tough HIIT workout and are envisioning all of the calories you’ve burned. With such a tough sweat session, you can afford to have that second serving of pasta, right? Not so fast! Too often, we overestimate how many calories we burn when we work out. It’s easy to eat back the calories you burned and more. In fact, a study published in the journal Appetite found that people ate 52% more of a snack when they even thought about exercise. You need nourishment after a workout but stick to whole food healthier fare. Don’t use your workout as justification for pigging out on splurge foods.

When You Eat with a Group or with Friends

Studies show that people eat more when they eat in a group or as part of a holiday celebration. In one study, this practice was more common in men, although women are also guilty. Unfortunately, the food we eat when we celebrate with a group or recognize a holiday is often unhealthy fare. Studies show what we eat and how much is strongly influenced by who we eat with.

When You Use the Wrong Plates and Dishes

The plates and dishes you eat on can subtly influence how much you eat. Studies show you’ll feel more satisfied with less if you eat on a small plate rather than a large one. A small plate makes standard serving sizes look more substantial so that you eat less. Even the color of the plates and dishes you use can have an impact on your appetite and eating habits. Red, orange and yellow plates tend to boost appetite and the desire to eat while blue or green ones tend to subdue appetite. Is it worth buying new dishes? It’s a subtle factor but one that could make a difference.

When You Eat Out

When you grab a meal at a restaurant or fast casual, you’ll probably consume more calories than you bargained for. That’s because restaurant portions are often grossly oversized. In addition, they often contain hidden sources of calories, like buttery or sugary sauces and salad dressings. Plus, restaurant food is more likely to contain undesirable ingredients like high-fructose corn syrup, sugar, refined carbs, and unhealthy oils. Then, there’s the bread basket and the dessert menu. So many temptations! Plus, some people order alcohol or wine with a meal and that adds to the calorie load.

One European study found that eating out was significantly linked with weight gain and higher BMI in men. Fast food is just as bad. A meta-analysis carried out by the USDA showed that people who live close to fast food restaurants have higher rates of obesity. It’s best to get the majority of your meals at home where you control the ingredients. When you have to eat out, plan ahead by accessing the menu and nutritional information online.

Free doesn’t mean calorie free, but sometimes we unconsciously believe that it does. Have you ever walked through a grocery store and tried the samples without even thinking about it? And then there’s office food. A study by the U.S. Centers for Disease Control and Prevent found that 70% of the food people eat at work is free food and it adds up to almost 1,300 calories per week.

According to a new study conducted by researchers in the Division of Nutrition, Physical Activity, and Obesity at the U.S. Centers for Disease Control and Prevention, the food people eat at work amounts to nearly 1,300 calories a week—70% of which is coming from free food. And, are these sources healthy? Not a chance! When is the last time someone brought a tray of steamed broccoli to the office? More likely, it’s cookies, doughnuts, and brownies, not exactly healthy fare.

The first step to stop overeating is to be aware of these triggers and try to avoid them. Awareness can lead to corrective action. If you think you’re guilty of any of these, keep a food journal for a few weeks and get a reality check about when and how much you’re eating. You might be surprised!

Can a Food’s Aroma Affect How Much You Eat?