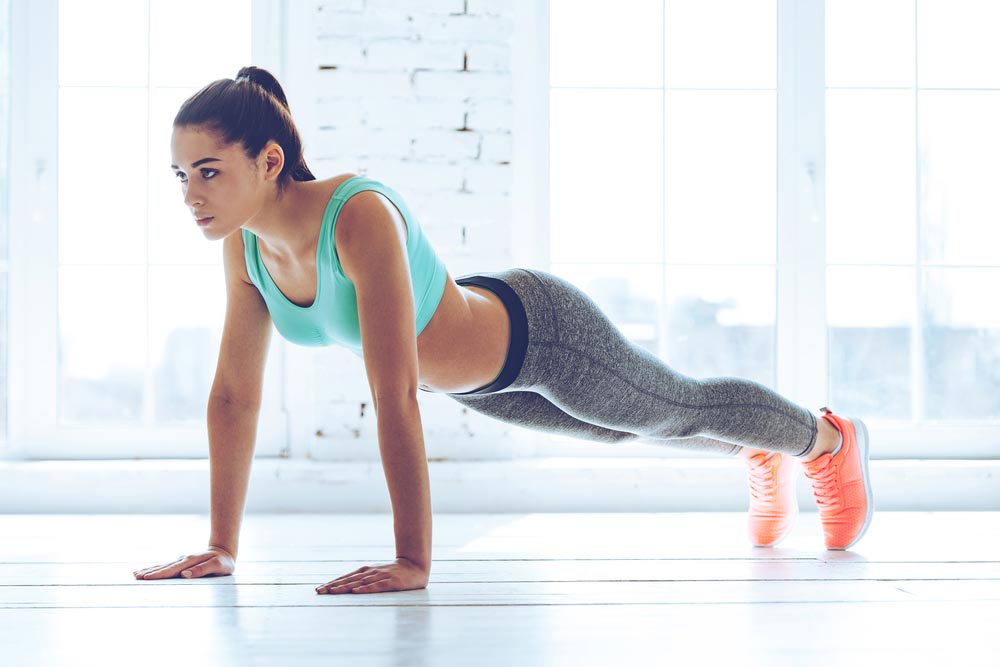 Who doesn’t want a nicely defined mid-section or even a set of six-pack abs? Well-defined abs speak volumes about your fitness level and show you take care of your body! But, how do you get those enviable abs? There are a variety of exercises that focus on the abdominal muscles and the most popular are some variation on crunches. More recently, planks have become trendy because they work the abs as well as the other muscles in the core region, including muscles that support your back and help you generate power.

Some of the muscles that planks work include the rectus abdominis, the internal and external obliques, transverse abdominis, the erector spinae muscles, the latissimus dorsi, and the glutes. That’s the beauty of planks. Unlike crunches that primarily work the ab muscles, planks also hit the muscles in the back and even the muscles that make up the pelvic floor. Doing crunches also helps sports performance as you generate the power you need to excel in many sports from your core muscles.

With so many benefits, you might wonder whether you need exercises other than planks to build strong abdominals and get that elusive six-pack. If the plank is such a good exercise, can you build abs by doing them alone?

When you do a plank, the muscle or the joint angle doesn’t change length. You simply hold the plank position against gravity using good form. In general, isometric exercises aren’t as effective as isotonic movements. They build strength, but you gain strength only at the particular position you’re holding and don’t gain strength throughout the muscle’s range of motion, but planks have the benefit of working the stabilizing muscles in the core as well.

Planks also work lots of muscle simultaneously, but your abdominal muscles will soon adapt to the challenge of standard planks. You will build strength and get some muscle development in your core when you first start doing planks, but it’s difficult to make a standard plank harder. You can hold a plank longer, but once you can hold a plank for 30 seconds, you won’t gain significantly more strength by holding it for much longer than that.

What about plank variations? Fortunately, there are variations to a standard plank (the standard elbows and knees plank) that target the abs even more. Sure-fire ways to make a plank tougher and engage your abs and core more is to lift one arm up off the ground when in a plank position or lift one leg off the ground. With these variations, your core is forced to stabilize, and this engages the core more. You can also do planks with your forearms resting on an unstable surface like a ball to engage your entire core more.

Is this enough to get a six-pack? Getting a six-pack requires more than hypertrophying the muscles in your abs and core. Often the limiting factor is too much body fat. For the abs to show, women have to drop their body fat to below 20%. Typically, ab hypertrophy won’t be visible until you get down to around 15 to 19% body fat. Getting to that level requires careful attention to diet. Often, it’s diet that makes or breaks a person. As they say, you can’t out exercise or out plank a bad diet.

Compound exercises that work big muscle groups in the lower body will also indirectly help you get ab definition as they recruit muscles that stabilize your core to do the movement. These exercises, such as squats and deadlifts, burn more calories since you’re working multiple muscle groups. But even these exercises combined with planks aren’t always enough to get significant muscle hypertrophy. More focused ab exercises, including variations on crunches, is often the added stimulation your abs need to grow. One to consider according to an ACE study is bicycle crunches. Based on EMG activity, this exercise activated the ab muscles the most of the 15 they tested. Other ones to consider, based on EMG activity, is the captain’s chair, stability ball crunch, and the vertical leg crunch.

Still, don’t underestimate the benefits of planks. Doing them enhances spinal stability and alignment. That helps protect your back and prevent lower back pain. Plus, planks are easier on the back relative to crunches because you flex your spine when you do crunches and hold a neutral spine when you do planks. In fact, if you have a history of lower back pain or injury, you should limit the number of exercises you do that involve spinal flexion. If an exercise feels uncomfortable, don’t do it.

Planks are a decent exercise for your abs, but more importantly, they work all the muscles in your core. They should definitely be part of your routine, but it’s unlikely that standard planks alone will get you a six-pack or even a significant amount of muscle hypertrophy. Instead, do plank variations, compound exercises that indirectly work the core,  and crunches in moderation. But, just as importantly, watch what you put into your mouth. The overused phrase about abs are made in the kitchen is on target. If you’re working your abs with a variety of exercises and you’re still not seeing them pop, check your body fat percentage. Those beautiful ab muscles may be hiding underneath a layer of fat.

Can Core Exercises Improve Your Posture?