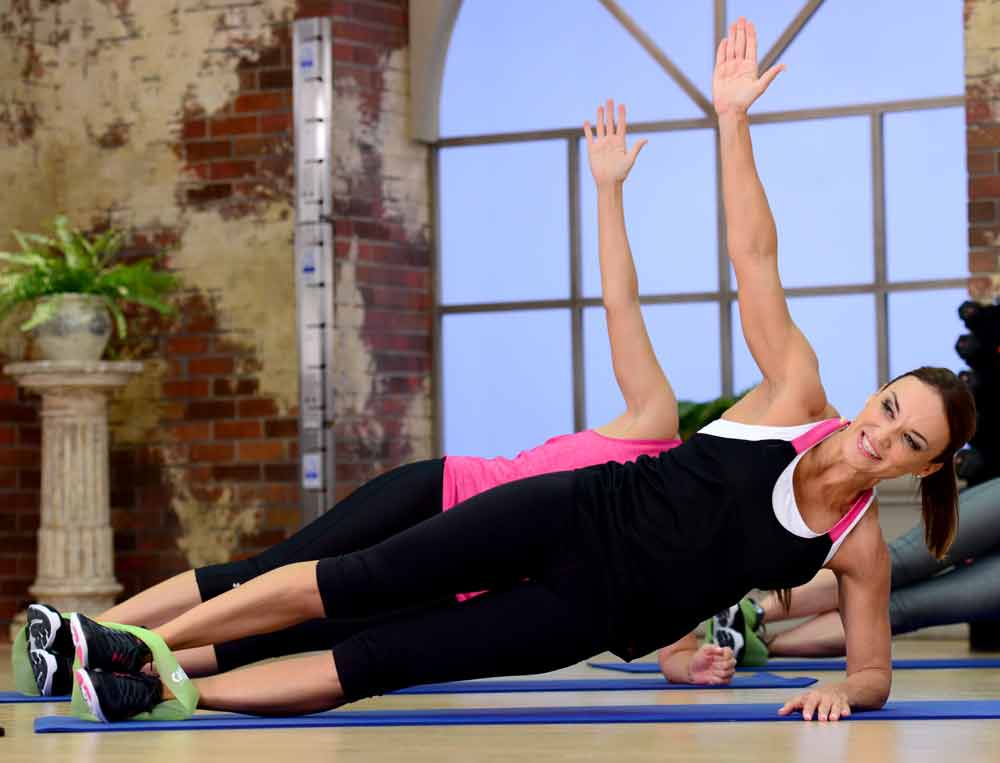 If planks aren’t part of your fitness routine, they should be! Unlike isolation ab exercises, like abdominal crunches, planks work all the muscles in your core, including your abdominals, back, and spinal muscles, as well as the muscles in your shoulders and chest. Even your glutes get in on the action as they contract during this movement. If you love exercises that work lots of muscles, planks should be on your list and you should give them as much emphasis, if not more than you do more traditional ab exercises. You’re probably aware of how effective planks are, but do you know how long you should hold a plank?

Is There a Benefit When You Hold a Plank Longer?

We know that planks should be in your routine but how long should you hold one to get the full benefits? When you first start doing planks, you might only be able to hold the position for 30 seconds or so, but as you continue to train, it becomes easier and you quickly find you can hold a front plank for a minute or longer. Over time, you may discover you can hold a front plank for several minutes. That’s certainly a testament to core strength and determination – but is it really necessary or beneficial to hold a plank that long?

For ego’s sake, you might enjoy dropping into a plank and holding it for five-plus minutes. But, you probably can’t top national and international records for holding a plank. According to the Guinness Book of World Records, the record holder for planks is Mao Weidong of China. This persistent young man successfully held a plank for eight hours and one minute. You have to ponder what was going through his head as he held this unnatural position for more than eight hours. You also have to wonder how long of a break from planks he took after that feat!

The good news is you don’t have to hold a plank for eight hours to get benefits. Strength coach and author Dan John who wrote the book Can You Go believes we should aspire to hold a plank for two minutes. If you can hold a plank that long, you’re fit and likely have a strong core. Holding one longer isn’t necessarily more beneficial. In fact, a study published in the Journal of Strength and Conditioning showed that doing multiple 10-sec plank holds during a workout led to the greatest increase in torso stiffness. So, doing more planks that are shorter in duration might be better than trying to maintain that position for two or three minutes.

One Long Plank versus Multiple Short Ones

There’s a lot to be said for doing MORE short planks rather than a few long ones. The key to getting benefits when you hold a plank for 60 seconds or less is to maximally contract your abdominal muscles. The problem with extending a plank beyond 60 seconds is your form can slip. You may find that you don’t contract your core and abdomen as tightly, your hips sink, and you lose focus. It becomes more of a mental contest than a physical one. You’re just trying to get to the finish line, regardless of whether you’re doing the exercise correctly. Planks were never meant to be held for four or five minutes, much less eight hours, as the record holder did.

Also, holding a plank for several minutes isn’t just challenging, it’s boring. Do it a few times to test your ability and congratulate yourself for accomplishing it. Then, up the challenge in a different way – by doing plank variations. There are more than 50 plank variations that will challenge your body in a different way while still working those core muscles. Most of us include side planks in our routine, but you can also do reverse planks, bird dog planks, chatarunga planks, planks with your feet on a stability ball, single arm or single leg planks You can even turn planks into a dynamic exercise by doing walking planks and plank jacks. Of course, these are only a few of the variations you can add to your routine. The point is to step outside the safety of a standard plank and make the move more challenging rather than holding the same position for several minutes. You’re building muscle endurance with this approach, but to strengthen and tighten your core, switch to more advanced plank variations once a standard plank becomes routine. Besides, who has time to hold a plank for more than a minute or two?

Planks and Back Pain

You probably think of planks as being a safer exercise for your back than crunches and sit-ups. Plus, they work more muscle groups and having a strong core lowers the risk of back injuries and back pain. However, when you hold a plank for minutes on end and your form slips, all bets are off. When your hips and tummy fall as you fatigue, it creates lumbar lordosis, exaggerated, inward curvature of the lower back. Holding this position isn’t healthy for your spine. So, staying in a plank for short periods of time using good form is a positive for your back and core, but when you try to hold one several minutes and let your form fall apart, you’re setting yourself up for back issues.

Don’t give up planks! They’re an effective, equipment-free exercise that’s easier on your back than many other exercises that work the abs, including crunches. But, don’t think that the only way to challenge yourself more and make them harder is to hold a standard one longer. Consider doing a series of planks during a workout, holding the position for no more than 30 seconds. When you do each one, concentrate on using the best form possible. It’s more beneficial to hold a plank for 30 seconds using good form than to hold the position for longer than a minute with sloppy form.

4 Ways to Add More Core Work to Your Workouts

5 Ways to Get More Benefits from Abdominal Training