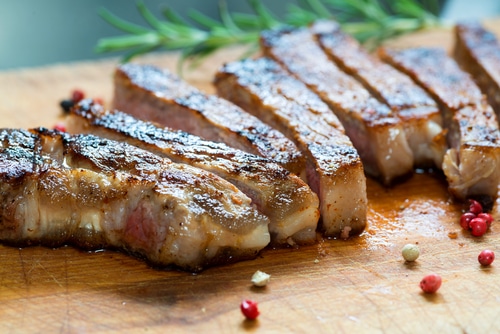 When you purchase red meat at your local supermarket, is it from cows that grazed in open pastures on grass or from animals raised in factory farms? These days you have a choice. Back in the 1940s, cattle were routinely raised in pastures where they ate grass. A decade later, factory farms began to appear where cattle no longer had access to open grasslands and ate a grain-based diet. Now there’s a movement back towards grass-fed beef again due to consumer demand. That’s a good thing since one option is clearly more humane than the other. Then there’s the issue of taste. Some people think that meat from grass-fed animals has a more appealing flavor, while others prefer the taste of grain-fed animals because that’s what they grew up eating. Finally, there’s the health issue. Some research suggests that grass-fed animals are superior from a health standpoint.

There’s a growing trend towards cutting back on red meat and meat in general. More people are choosing a “flexitarian” approach to their diet, eating vegetarian some of the time but not completely giving up meat. Red meat can be part of a healthy diet when you eat it in moderation and avoid processed meat. It’s even better if you choose beef from cattle fed on grass rather than corn – and raised and slaughtered humanely. Here’s how you can benefit nutritionally by doing so.

Research shows that what a cow eats impacts its body composition. That should come as no surprise since the same is true of humans. Animals raised on grass are typically leaner and have lower levels of particular saturated fatty acids, the ones most likely to raise cholesterol. Beef from grass-fed cattle also has higher levels of omega-3 fatty acids compared to cattle fed grains. Research suggests that omega-3s have an anti-inflammatory action that helps to counteract the effects of omega-6 fatty acids that are so prevalent in processed foods.

Ideally, humans should get a ratio of omega-6 to omega-3 through diet of between 1:1 to 5:1. Most people get a much higher ratio than this, as high as thirty times more omega-6 compared to omega-3. This is believed to set up pro-inflammatory conditions that increase the risk of chronic health problems like heart disease and cancer. The higher amounts of omega-3s in grass-fed beef contribute to a healthier omega-6 to omega-3 ratio.

Grain versus Grass-Fed Beef and CLA

CLA, also known as conjugated linoleic acid, is a type of fatty acid primarily found in animal products. CLA is produced by bacteria inside the intestinal tract of cattle and you get the benefits when you eat meat and dairy foods. What are the benefits? CLA has antioxidant benefits. In animal studies, it appears to reduce the risk of some forms of cancer and lower the risk of heart disease as well. Some research also shows it modestly improves body composition by conserving lean body mass and promoting fat loss while other studies show no weight management benefits. Grain-fed animals produce less CLA in their stomachs compared to grass-fed cattle. A diet of grains appears to change the pH balance in the intestinal tract of cattle in such a way that CLA-producing bacteria are destroyed. Therefore, you get less of this antioxidant fatty acid when you eat grain-fed beef.

Grass-fed cattle have up to seven times greater levels of beta-carotene in their muscle tissue compared to grain-fed animals. Beta-carotene is an antioxidant. A portion of the beta-carotene you get through diet is converted to vitamin A, a vitamin critical for normal growth, orderly cell division, and healthy vision. You can also get beta-carotene by eating orange, yellow and green vegetables like sweet potatoes, squash and leafy greens but grass-fed beef can be a good source as well.

Grass-fed beef also has higher levels of vitamin E, up to three times the amount in grain-fed meat. Vitamin E is an antioxidant that helps to protect cell membranes against free radical damage.

Eating large quantities of red meat, especially processed meat, has been linked with a greater risk for some types of cancer, particularly colon cancer. It’s best to eat red meat in moderation – but when you buy red meat – consider the benefits of grass-fed beef over grain-fed. Grass-fed meat is higher in omega-3s and CLA and a better source of antioxidant vitamins and nutrients like beta-carotene and vitamin E. It’s also better for the animal. Something to think about if you eat red meat.