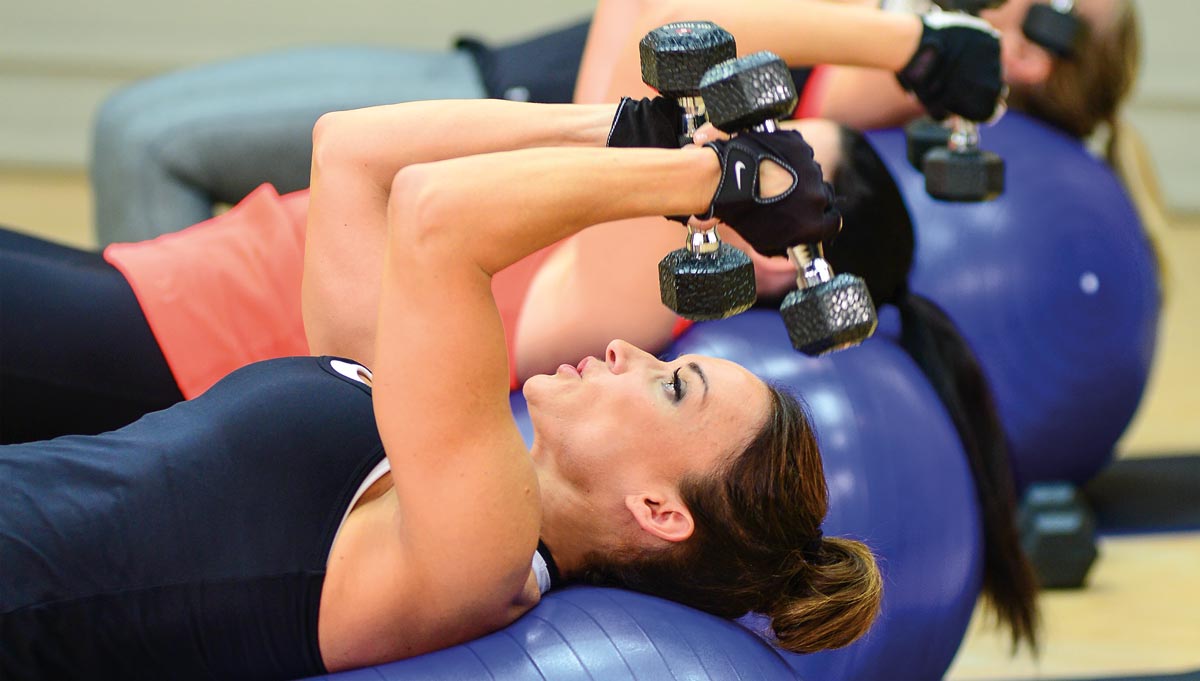 How do you accomplish both goals? Some people periodize their workouts so that they lift heavier to build strength during some strength-training sessions and lift a bit lighter and do higher reps during other sessions to focus on muscle hypertrophy. But there’s a repetition scheme that allows you to work both strength and muscle hypertrophy during the same workout. It’s called a descending, or reverse, pyramid repetition scheme.

What Are Reverse Pyramids?

There are two types of pyramid repetition schemes: straight pyramids and reverse pyramids. With straight, or ascending, pyramids, you start with a lighter weight and do a high number of reps. Then, with each subsequent set, you increase the weight and reduce the number of reps. A reverse, or descending, pyramid uses the inverse approach. You begin with a heavy weight that you can only lift five or six times and reduce the weight and increase the reps on the sets that follow. Here’s how straight and reverse pyramid schemes would look for biceps curls:

Both repetition schemes have benefits, but the reverse pyramid scheme has unique advantages if you’re trying to build strength and muscle size in a time-expedient manner. Most people use the straight or ascending approach but here’s why you should consider using a reverse pyramid approach.

With reverse pyramids, you can build strength and muscle hypertrophy in the same workout. How so? With reverse pyramids, you begin with the heaviest weight. The weight you choose should be around 80 to 90% of your one-rep max. That’s strength-building territory! So, you’re hit the fast-twitch muscle fibers hard when your muscles are still fresh. Plus, you’re using a resistance heavy enough resistance to build strength. If you, instead, used a straight pyramid scheme, your muscles would be fatigued by the time you reached the heaviest set. You’re fatiguing the fast twitch muscle fibers you use to do the heaviest set. That’s not ideal for strength building.

Reverse pyramids are ideal for strength because you’re lifting heavy on the first set. The sets that follow, however, are targeted for hypertrophy since you’re doing more repetitions using less weight. Higher reps are better for stimulating muscle protein synthesis. Therefore, you’re essentially accomplishing two goals at once. Muscle strength gains are optimized by high resistance, low reps while hypertrophy is maximized with moderate resistance and moderate volume.

There’s another reason to love the reverse pyramid. When you lift a heavy weight on your first set, it activates high-threshold motor units. High-threshold motor units are those that control large muscle groups and are recruited when you need a lot of force. They also have a higher threshold for activation. But, once you’ve activated them on a heavy lift, they’re “primed” when you do the next set. So, the next set using the lighter weight feels easier than it normally would.

What Does Research Show About Reverse Pyramids and Strength Building?

There isn’t a great deal of research looking at pyramid schemes, however, one study compared straight pyramids with a reverse pyramid scheme. The participants were 34 untrained women. One group used a straight pyramid scheme, gradually increasing the weight, in their training. The second group used a reverse repetition scheme. There was also a control group. The weight used for the straight scheme was 50% of one-rep max, then 75% of 10-rep max. The final set was 100% of 10-rep max. The second group did the sets in reverse order, starting with the heaviest weight first.

What were the results? Both groups got stronger, but the group that did reverse pyramids gained more strength in their biceps than those that did the straight pyramids.  Otherwise, strength gains were comparable. However, the group who did the reverse pyramids displayed greater evidence of muscle damage, as measured by changes in markers.

The biggest disadvantage of using this repetition scheme is you’re lifting heavy when your muscles aren’t as warm. So, it’s important to warm-up before doing your first set. It’s also not an ideal scheme for beginners. Master traditional sets before attempting this type of training. Reverse pyramids are most beneficial when you’ve done traditional sets for a while and need to “shake things up” to break out of a plateau. Using this type of repetition scheme is also taxing to the nervous system. Start out by doing a few sets in this manner rather than building an entire workout around reverse pyramids.

Reverse pyramids are a way to work strength and muscle hypertrophy in a single workout. This repetition scheme offers advantages over straight pyramids since you’re starting with the heaviest weight before your muscles are fatigued. When you do this, you hit the high-threshold motor units early and this makes the lighter sets that follow feel easier. It’s also a more advanced training method that can help you break out of a plateau. But, be sure to use this method judiciously as it’s draining to your nervous system.

What Are the Benefits of Pyramid Strength Training?

Take Your Workout to the Next Level with Reverse Pyramid Training