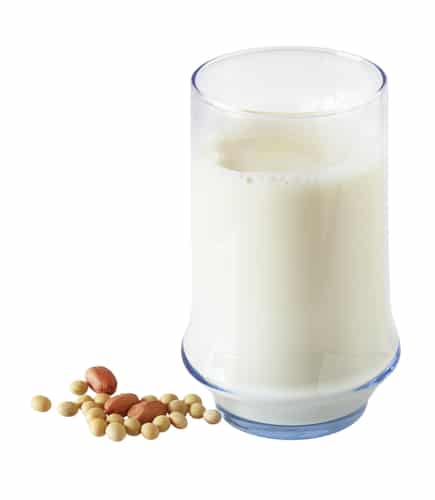 Years ago you didn’t have lots of choices when it came to milk. You either drank cow’s milk or you didn’t. These days most supermarkets carry a number of alternatives to dairy milk including almond and coconut milk beverages, rice milk, hazelnut milk, and oat milk. The most popular alternative milk choice for people who are lactose intolerant, vegan and those who are concerned about hormones in cow’s milk is soymilk. Soymilk is widely available at most health food stores and mainstream supermarkets these days – and at least from a taste standpoint, most people find it to be an acceptable alternative to cow’s milk for breakfast cereal and for sipping. But what about the nutritional differences? Is soy milk as nutritious as dairy milk?

How Soymilk Differs From Cow’s Milk

Soy milk is loosely referred to as milk since milk is a liquid produced by the mammary glands of animals. Manufacturers make soymilk by soaking soybeans in water, grinding them and then straining the resulting mixture to produce “milk.” During the process of making soymilk, a compound called okara forms. Okara is high in protein and fiber and is edible. Therefore, some home soymilk makers use it in recipes. When soymilk is made commercially, the okara is made into high-protein animal feed.

Soymilk is lower in fat than whole milk. It typically has about the same amount of fat as 2% cow’s milk and a little more than skim milk. One advantage of soymilk over cow’s milk is dairy milk contains saturated fat whereas soymilk, being plant-based, does not. Cow’s milk also has around 20 milligrams of cholesterol a cup, while soymilk has none.

What about carbohydrates? Soymilk has half the amount of carbs that whole milk does in its unsweetened state, but when you buy it commercially it may have added sugar. You can find unsweetened soymilk at some supermarkets and that’s usually the best choice.

Some people drink milk to meet their calcium requirements. A cup of cow’s milk fulfills about 30% of an adult’s calcium needs for the day. Soymilk falls short in this area. It only has about a quarter of the calcium that dairy milk has. Fortunately, when you buy commercial soymilk, it’s fortified with enough calcium to make it equivalent to cow’s milk as a calcium source. Depending upon the type of calcium the manufacturer used to fortify their commercial soymilk, the calcium in soymilk may not be as readily absorbed as the natural calcium in dairy milk. When you make your own soymilk at home, you’re only getting about a quarter of the calcium that’s in commercial soymilk and cow’s milk.

Manufacturers fortify soymilk with vitamin D and vitamin B12. These two vitamins are found naturally in cow’s milk but not in soymilk. People who eat a vegan diet over a period of many years are at risk for deficiency of vitamin B12 since B12 is only found naturally in animal products. Fortunately, commercial soymilk contains added vitamin B12 and is often fortified with other B vitamins as well.

Vitamin D is also added to soymilk to make the amount it contains comparable to cow’s milk – although the plant-based form of vitamin D (vitamin D2) is used for fortification rather than vitamin D3. Research suggests that vitamin D2 is not as active in the body as vitamin D3 and may not offer the same benefits. Soymilk is usually also fortified with vitamin E.

Unless cow’s milk is produced organically, dairy milk may contain bovine growth hormone, a hormone that some experts believe increases the risk of hormone-dependent cancers like breast and prostate cancer. In addition, it may have been treated with antibiotics Soymilk contains phytoestrogens, a plant-based “hormone” that has weak estrogenic properties. For years experts have argued about whether phytoestrogens promote or protect against breast cancer. The most recent research suggests they may be protective.

There are advantages and disadvantages of drinking each form of milk. The bovine growth hormone and antibiotics and the higher amount of saturated fat make cow’s milk a less appealing choice. On the other hand, the cow’s milk contains more natural calcium, vitamin B12 and vitamin D. Many people have problems digesting the lactose in cow’s milk and will have fewer digestive issues if they drink soymilk, although some people experience gas and bloating when they drink soymilk too. Which should you choose? If you drink cow’s milk, choose organic whenever possible. If you drink soymilk, select one that contains no added sugar. There’s also almond and coconut-based beverages as another alternative, but that’s the topic for another article.

Soy Foods: They’re Not All the Same

Non-Dairy Milk Alternatives: How Do They Compare Nutritionally?

2 thoughts on “Soymilk Versus Dairy Milk: How Do They Differ Nutritionally?”