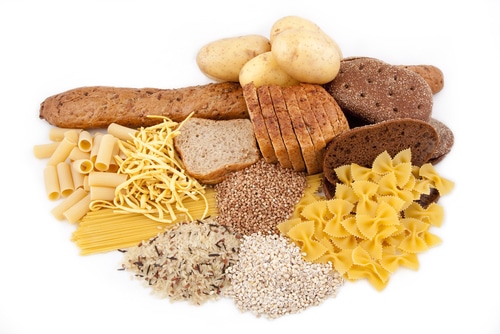 There are lots of different theories about what causes obesity. Some argue that lifestyle plays the greatest role, too many “biggie” orders of fries and too little energy expenditure. There’s also evidence that genetics play a role in obesity. For example, obesity tends to run in families. Although there are rare forms of obesity that are due to a single gene change, most “genetic” obesity is a result of mutations in multiple genes. Even when there’s a genetic tendency towards obesity, a healthy lifestyle, clean eating, and exercise, can offset the effects of genes in many cases. The environment seems to have a strong impact on whether or not a person at risk for obesity actually becomes obese – so genes aren’t destiny!

Obesity and Carbohydrate Breakdown: Is There a Link?

Adding to the evidence that genes play some role in obesity is a new study. Researchers at the Imperial College of London recently discovered a link between how our bodies digest carbohydrates and obesity. After looking at the genes of thousands of men and women in Europe, they discovered people who have fewer copies of a gene that digests carbohydrates called AMY1 are at greater risk for becoming obese. They took this research a step further by looking at this gene in 700 non-Europeans from Singapore and found the same association between salivary amylase and obesity.

What is AMY 1 anyway? It’s a gene that codes for an enzyme called amylase that breaks down starch. Your body actually makes two forms of amylase. One form is produced by your pancreas. It breaks down carbohydrates once they reach the digestive tract. The other is in saliva. Salivary amylase begins breaking carbohydrates down into simple sugars once food enters your mouth. You can experience this for yourself. If you slowly chew a cracker, you’ll notice it starts to taste sweet. That’s because the amylase in your saliva is breaking some of the cracker’s carbohydrates down into sugar before you even swallow it.

In this study, having more copies of the gene that produces salivary amylase (AMY1) was linked with a lower risk of becoming obese. For example, people with four or fewer copies of this gene were eight times more likely to be obese relative to someone with at least ten copies. Based on this, researchers believe how a person processes or breaks down carbohydrates may influence their risk of obesity. People prone to obesity may digest and break down carbohydrates differently. It’s also possible that once these breakdown products reach the gut they’re handled differently in people who are obese.

Interestingly, one study in children showed obese boys had lower salivary amylase levels than non-obese boys. So salivary amylase and its expression may ultimately be a factor that influences a person’s risk for obesity.

What’s the Link Between Salivary Amylase and Obesity?

No one knows exactly how low levels of salivary amylase increases the risk of obesity. It’s possible carbohydrates enter the intestinal tract in a different form when there’s not enough salivary amylase in the mouth. These incompletely broken down carbs may change the composition of bacteria that live in the gut.

Some studies have found a link between gut bacteria composition and a greater risk of obesity. In fact, populations of gut bacteria have been identified that are linked with insulin resistance, type 2 diabetes, obesity, heart disease, and stroke. The population of bacteria we have in our guts is as individual as we are.

Does Low Salivary Amylase Lead to Other Problems as Well?

Some research has found a link between low salivary amylase and a greater risk for insulin resistance and metabolic syndrome, a constellation of problems that increases the risk for type 2 diabetes and heart disease.

A saliva test could be used to measure salivary amylase. Based on the findings, dietary interventions might prove helpful. In addition, if you have low salivary amylase, it’s possible that chewing your food longer might compensate by keeping carbohydrates in contact with the amylase that is produced longer. No one knows for sure. At the very least, chewing your food longer slows down the pace of a meal. This gives appetite hormones time to kick in before you’ve eaten an entire plate of food and gone back for seconds or thirds.

The way starch is broken down beginning in the mouth may influence a person’s risk for obesity. It’ll be interesting to see what future research shows and whether it’s possible to intervene through dietary changes, probiotics, etc. Stay tuned!