A Plant-Based Protein That Builds Muscle Better Than Dairy?

A Plant-Based Protein That Builds Muscle Better Than Dairy? 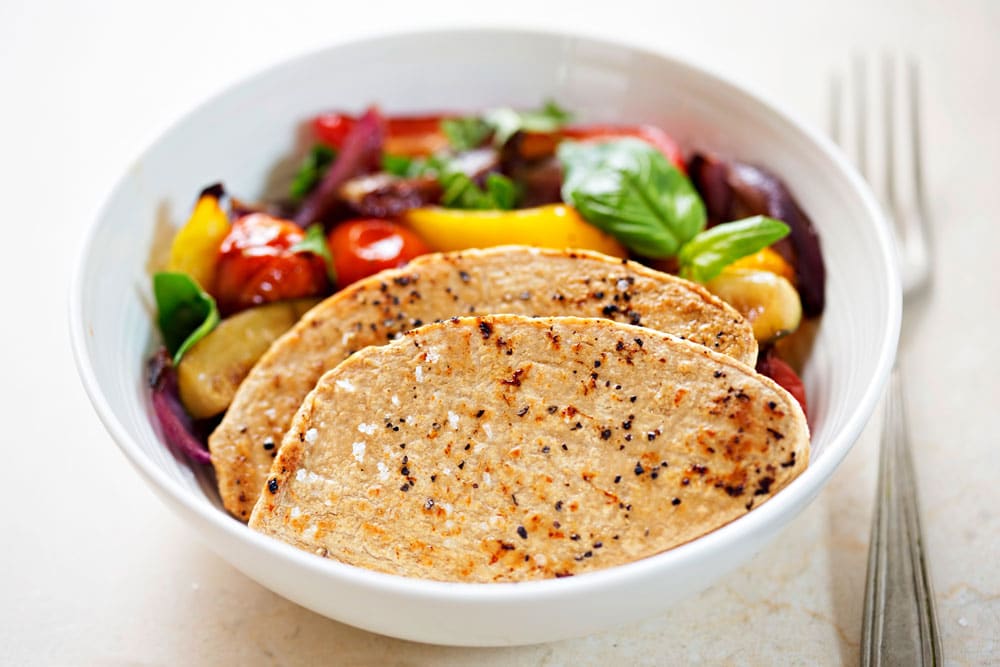 The emphasis these days is on eating more plants. Unlike meat and dairy, plants are an excellent source of fiber and contain phytonutrients with anti-inflammatory properties. The best plant-based foods are colorful, non-starchy ones, like the abundance of fruits and vegetables you find each time you visit a farmer’s market. In fact, you’ll get more health benefits if you “eat the rainbow” by choosing plants from each color–green, red, orange, yellow, and purple. Don’t underestimate the power of white either. Cauliflower and mushrooms are a good source of vitamins, minerals, and phytonutrients.

However, there’s a new plant-based “meat” alternative on the market. It’s mycoprotein made from Fusarium venenatum, a fungus naturally found the soil. Scientists ferment the spores from the fungus in a nutrient-rich environment, and they form a high-protein, thick dough. After steaming, freezing and combining it with wheat protein or egg whites, mycoprotein has a chewy, meat-like texture and the faint aroma of mushrooms that make it a good substitute for meat and poultry. The final product is a decent source of protein and, unlike meat, it’s high in fiber and low in fat.

Currently, the only products that contain mycoprotein is a line called Quorn that makes plant-based meat products. These products have been available in Europe for decades and are now distributed widely in the United States. You can buy Quorn burgers, nuggets, crumbles, and more as a substitute for meat and chicken. These products contain a respectable amount of protein, about 10 grams per 3-ounce serving. But it still has less than half the protein you’d find in a similar amount of chicken breast. A 3-ounce chicken breast has 26 grams of protein. Still, Quorn products have a respectable amount of protein, especially for a non-meat product.

You might assume that mycoprotein is an inferior substitute for meat and dairy, at least when it comes to building muscle, but an intriguing new study suggests otherwise. In the study, 20 young, healthy men who weight trained regularly took part in an intense strength training session. After the tough workout, the men consumed either milk protein or mycoprotein. The proteins had tracers attached so they could follow the movement of the protein through the body.

When something new comes on the scene, especially a food, questions arise about safety. Is mycoprotein a safe, non-animal meat source? One concern is the potential for an allergic reaction to the mycoprotein. According to the Center for Science in the Public Interest, there have been more than 2,000 reports of allergic-type reactions and digestive upset in people who consumed mycoprotein in Quorn products. Some people developed symptoms the first time they ate it while others only had symptoms after consuming it for a while. However, many people who consume it regularly have no ill effects from the mycoprotein. In terms of allergy and sensitivity reactions, soy carries a higher risk than mycoprotein. However, it’s a form of protein you might want to avoid if you have a history of food allergies and food sensitivities.

Quorn products also aren’t suitable for people who are sensitive to gluten since Quorn products contain wheat protein and it’s not vegan since it is processed with egg whites. On the other hand, the company plans to launch gluten-free and vegan versions of their most popular products.

You’ll probably hear more about mycoprotein as a meat substitute in the future as concerns about the impact meat has on the environment grow. Preliminarily, it looks like it has favorable effects on muscle protein synthesis, too. On the downside, it is a manmade “meat,” in some respects, and some people are opposed to manufactured forms of meat, equating it with other processed foods. Possibly the best approach is to diversify your protein sources. If you’re not trying to avoid animal products, fatty fish supplies protein but also long-chain omega-3s with anti-inflammatory benefits.

If you eat beef, look for grass-fed, humanely raised meat sources. Grass-fed animals produce meat with higher omega-3 content. You can also get your protein from eating a diversity of plant-based foods, including whole grains, nuts, seeds, unprocessed soy, and legumes. Of these, only soy is a complete source of protein, but when you eat a diversity of plants, you get all the essential amino acids your body needs for health and to build muscle. But if you’re tempted to try mycoprotein, it looks like it may be favorable in terms of its impact on muscle protein synthesis.

Plant-Based Protein: Why You Need More of It

Protein Quality: Not All Proteins Are Created Equal

6 Common Protein Myths & Facts That Too Few People Get Right