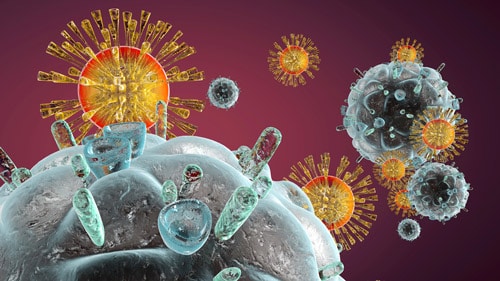 Your immune system is the army of cells that protect you against illness. Without a competent immune system, you run the risk of falling victim to every bacteria and virus that manages to penetrate your skin and mucous membranes. A healthy immune system even helps defend you against cancer cells. In fact, almost every acute and chronic disease in humans relates somehow to the immune system.

Unfortunately, your immune system ages along with the rest of your body. The times in life when your immune system is LEAST able to protect you against illness is when you’re an infant and when you enter the later years of life. As immune function weakens with age, the risk of infection goes up. For example, pneumonia and influenza is a common cause of death in people over the age of 65. That’s why doctors recommend that seniors get a pneumonia vaccine and a yearly influenza vaccine as well.  So, what is this entity we call the immune system?

Your Immune System is Multi-Faceted

A variety of cells is involved in the immune response, some of which produce protective proteins called antibodies. These antibodies bind to the “bad guys,” bacteria and viruses and mark them for destruction. In response, other cells, called macrophages come along and gobble them up. You also have other immune cells called T-cells and natural killer cells that directly target pathogens. We won’t go into detail about how each cell works but instead give you an overview of what can go wrong.

One way in which your immune system ages is it becomes more sluggish in responding to a pathogen, like a bacteria, virus, or parasite. Instead of the swift response, you enjoyed when you were younger, immune cells are slow-moving and not as quick to respond to a threat.  Plus, studies show that later in life the various components of the immune system don’t communicate with each other as well as they did earlier in life.

The Threat of Inflammation

Not only does your immune system become less responsive to pathogens later in life, but it also has a tendency to “overreact,” not against specific pathogens, but against normal tissue. This is what we know of as inflammation. In fact, there’s a term for this type of damaging upregulation of the immune system associated with aging, it’s called “inflammaging.”

Inflammaging is marked by the release of chemicals called cytokines that cause tissue damage and inflammation. Unfortunately, this uncontrolled tissue destruction by the immune system is linked with a number of diseases associated with aging, including heart disease and dementia. At the same time, the immune system aging also increases the risk of infection since immune cells don’t respond as well to threats. Plus, immune cells become less skilled at communicating with each other as they age. So, you have a higher risk from chronic diseases, like heart disease as well as infection.

Why does inflammaging not cause problems for everyone? People who age successfully seem to have stronger anti-inflammatory defenses that protect them against the ravages of inflammation and inflammaging. There’s a genetic component to this but lifestyle is also a factor. Exposure to certain viruses that stay dormant in your system, including one called cytomegalovirus, can trigger inflammation later in life.  Cellular stress, in particular, promotes uncontrolled inflammation and this can come from bad habits like smoking or a poor diet.

In addition, inflammaging also plays a role in the loss of muscle tissue we experience with aging and the accumulation of visceral fat in the abdominal region. In fact, inflammaging impacts almost every organ and system in your body, including bone density, exercise tolerance, metabolism, brain function, and even mood.

How might inflammaging contribute to abdominal fat and muscle loss? Inflammaging triggers the release of the stress hormone cortisol, a hormone that breaks down muscle tissue and increases visceral fat. Since cortisol also has anti-inflammatory activity, its release may be the body’s attempt to stop the tissue destruction caused by inflammaging.

Knowing how important the immune system is to health, what can you do to age-proof it?

Seventy percent of your immune system lies in your gut and this portion is strongly influenced by the gut bacteria that make their home there. Make sure the bacterial citizens in your intestinal tract are healthy ones. Add more fermented foods to your diet, including fresh sauerkraut, yogurt with live cultures, and other fermented vegetables. Avoid taking antibiotics and limit consumption of factory-farmed meat. Factory-farmed animals receive antibiotics to promote growth and the antibiotics can impact your gut bacteria.

Studies show that moderate quantities of exercise (without overtraining) boosts the protective response of immune cells while helping to tame inflammation. Plus, you can enjoy all of the other anti-aging benefits that exercise offers. Exercise is good medicine!

To support the health of your immune system, you need a balanced array of macronutrients, vitamins, and minerals. Some vitamins and minerals are especially important for immune health and immune system balance. These include vitamin C, vitamin D, zinc, and selenium. Deficiencies in any of these dietary components can throw your immune system out of balance and increase your risk of infection of inflammation. Vitamin D and zinc act as “immune modulators,” helping to keep your immune system in equilibrium. Plant-based foods also contain phytonutrients that support immune function.

Some experts believe that diet is a major factor driving immune dysfunction associated with aging. Many elderly people reduce their food intake as they age and eat fewer foods that contain essential micronutrients, like zinc and selenium. This micronutrient deficiency may contribute to immune dysregulation later in life.

Choose whole foods. Studies show that sugar cripples the activity of immune cells called neutrophils for up to five hours after ingesting it. That’s a good reason to stay away from packaged foods and other options that have added sugar or are highly processed.

Strangely enough, your immune system ages in a way that increases the risk of both infection and chronic diseases like heart disease and dementia. You don’t have complete control over this but eating a balanced, nutrient-rich, whole food diet, avoiding cell-damaging factors like smoking, and exercising are a few of the things you can do to help your immune system age more gracefully.

MedLine Plus. “Aging changes in immunity”