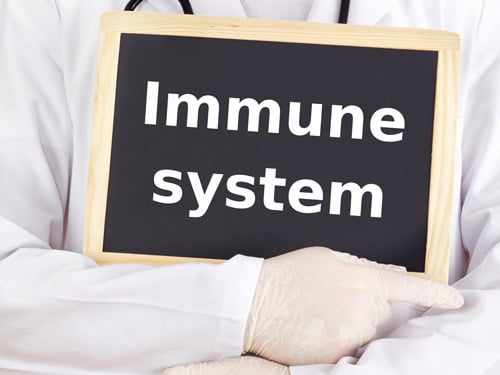 Everything about your body changes to some degree as you age. Some of these changes are desirable. For example, you’re wiser than you were 20 years ago, while others you could do without. It’s not just your outward appearance that undergoes a transition, cells and tissues age as well, including your immune system.

Your immune system is probably not something you think about, but it’s constantly at work protecting you from foreign invaders – from viruses and bacteria to tumor cells. With such an important job, keeping your immune system healthy helps keep YOU healthy. So, you want it to do its job at all ages. What changes happen to your immune system as you age?

The Two Divisions of Your Immune System

Your immune system is made up of an innate division and an adaptive division. The innate portion is made up of cells and physical barriers, like your skin and mucous membranes, that protect against invaders. For example, your mucous membranes release chemicals that help eradicate bacteria and viruses. Your skin acts as a physical barrier to foreign invaders, making it harder for them to gain access to your body. Plus, you have certain cells, such as natural killer cells and macrophages, that are on the frontlines ready to react to a threat. These are defenses that you’re born with and they’re non-specific. They’re ready to tackle any potential pathogen or threat, even if they’ve never encountered it before.

In contrast, the acquired portion of your immune system is made up of specialized cells and proteins that acquire the ability to protect against invaders. They act as a more sophisticated back-up system when the innate immune system can’t eradicate a threat on its own. Cells in the acquired immune system have “memory.” Once they make contact with a particular foreign invader or foreign protein, they can recognize it again and launch an attack against it. Therefore, these cells are trained to identify a specific threat, making them specialized. The acquired immune division includes various types of T-cells and B-cells that produce antibodies.

Unfortunately, both divisions of the immune system become less efficient with age. The decline in immune function that goes along with aging is called immunosenescence. Of the two parts of the immune system, it’s the adaptive immune response that declines the most. Evidence of a drop in adaptive immunity is evident in the way the body responds to a vaccine later in life.

A vaccine consists of an attenuated virus (one that’s too weak to cause illness) or a synthetic protein that resembles that virus. When you introduce the vaccine into the body, it elicits an immune response and creates T-cells and B-cells. These cells are trained to recognize a virus should they encounter it again. People over the age of 60 don’t mount as robust of an immune response when vaccinated and the protection against infection is often weaker. Due to the weakening of the immune response, older people are at higher risk of infection and infections are often more severe.

In addition, B-cells, the cells that produce antibodies decrease in number with age and T-cells do too. T-cells are made by the thymus gland, a gland in your chest, and it becomes atrophic later in life. The innate immune system doesn’t escape aging either. Natural killer cells, the cells that are geared up to fight viruses and early cancer cells, decrease in number, making it easier for cancer and viral infections to gain a foothold.

How does all of this come about? Studies show that immune cells of older adults produce higher levels of pro-inflammatory chemicals called cytokines. One in particular called IL-6 goes up with age. Over time, the pro-inflammatory effects of these cytokines can damage healthy tissues. Experts believe this type of damage contributes to aging and age-related diseases. In fact, in recent years, a new term has been coined to describe this phenomenon – inflammaging.

As you can see, immune systems change with age and they are altered in more than one – susceptibility to infection increases AND tissue damage due to immune system over-activity goes up as well. That’s why autoimmune diseases are more likely to strike after menopause in women and death due to infection is more common after the age of 65. Is there anything you can do to avoid these problems or at least lower your risk?

·       Check your vitamin level to ensure you’re within the optimal range. Vitamin D is a modulator of immune function.

·       Avoid processed foods. They are rich in processed omega-6 fats that create a pro-inflammatory environment.

·       Moderate exercise helps stimulate the activity of immune cells. Avoid overtraining as it can lead to immune suppression.

·       Eat fermented foods, including yogurt and fermented vegetables, like sauerkraut. These foods seed your gut with healthy bacteria that support healthy immune function.

·       Manage stress. Like lack of sleep, stress triggers the release of cortisol.

·       Make sure you’re getting at least 7 hours of sleep a night. Lack of sleep increases cortisol release and this suppresses immune function.

What you eat and the lifestyle you lead helps to offset some of the changes that affect your immune system as you age. So, take advantage of it.

Medline Plus. “Aging Changes in Immunity”

Does Vitamin C Really Lower Your Risk of Catching a Cold?

Does Your Immune System Protect Against Weight Gain?

How Your Immune System Ages and Why It Matters